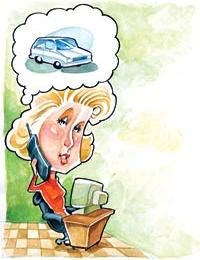 I once directed an infomercial to sell jewelry during the holiday season. The script writer thought it would be cute to have a scene with our model and a baby reindeer. The logistics and cost of a deer were substantial, so I requested that the writer turn the deer into a rabbit. Three days before the shoot the prop manager left a message for me asking what color rabbit I wanted. I emailed back and said, "Something with mixed colors would be cute." The property manager said she couldn’t find a mixed-color rabbit. She did say that she could have one custom painted, but that was going to bang my budget pretty hard. At this point, I decided I needed to pick up the phone and actually speak with her. It was then that I discovered that she was trying to get a Volkswagen Rabbit.


The most important thing a director has to do is communicate. The director must find ways to consistently communicate to everyone who participates in the project, including the producer, client, the designers, crew and talent. I had a director tell me a concept for a solid and original project, but when the project was completed, the concept was just not there. Asking around revealed that the crew and the talent never understood the concept and so the director’s vision never found its way into the end-product.

As soon as you have an understanding of the scope and complexity of a project, you should write up a concept proposal. A concept proposal details the components of the project in plain English. It should include:

We all know how important three act structure is in narrative filmmaking;  it’s been used in storytelling of all sorts for eons, and if...