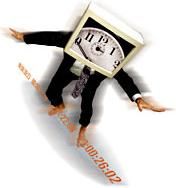 It used to be that discussing the space-and-time continuum fell into the domain of science fiction writers and astrophysicists. Not any more, though.

Fundamentally, videography always includes altering time and space for your viewer. Through video, you can routinely expand seconds into minutes or compress hours into seconds. You can take your viewers around the world in a few moments, and even make them believe they are somewhere they really aren’t. Sound like a lot of power? It is, but it’s surprisingly easy to master a lot easier than going to college for an advanced physics degree.

What Do "Space" and "Time" Mean?
To the videographer (and to the viewer) the four sides of the television screen define a window to the world. As a video editor you have unbounded ability to manipulate space. Space is only what your viewers see (or, more accurately, what they believe they see) and nothing more. If you include something in your shot, it exists in your video world. If you don’t show it, it doesn’t exist in the mind of the viewer.

Time, as it pertains to video, is the pace with which events happen. Sometimes scenes will unfold in real time, but often an editor will compress or expand the amount of time it takes to show an event to an audience. Distance is also related to time. If a person walk three steps from his car to a door, the vehicle and the building are believed to be close to one another, even if they are actually miles apart.

Disconnecting the Connected
Assume for a moment that on a recent vacation you biked through a national forest. You would like to include a segment about your bike ride in your vacation video. Unfortunately, you didn’t get it on tape, and now you’re nowhere near that national forest to get the footage you need. What do you do? You manipulate space.

Grab your camcorder (and your bike) and head down to your local park. Is there a path you can shoot that runs near the woods there? Keep your shots tight and show only trees in the background. Be careful to frame out the street beyond them and the kids playing on the jungle gym next to the woods. By framing out items that don’t belong in the national park and including only those that do, you create a new (or an old) reality. Remember, if you don’t show them the baseball field on the other side of the path, your viewers won’t even know that it exists. Because your viewers only know what you show them, you can manipulate space without breaking into a sweat.

Connecting the Disconnected
When you were on vacation, perhaps you got a shot of the sign at the park’s entrance. If you edit that shot so it appears right before your city park footage, you create a visual connection for the viewer between two places that are, in fact, many miles apart. The shot of the sign implies to the viewer that the shots that follow take place in the national forest.

This technique is used on nearly every sitcom that you see on television. On Friends a shot of a busy New York street is followed by a shot of an apartment building, then a shot of the interior of an apartment as Jennifer Aniston enters and begins a scene. On a re-run of Cheers an exterior rainy shot of the pub on its busy Boston street is followed by a wet Norm entering the bar and taking his usual seat. In both examples, the interior scenes were shot on a set in Los Angeles, thousands of miles from the buildings that were shown in the exterior shots. The viewer, however, believes that the inside shot and the outside shot are of the same building.

This technique also allows you to place two people in the same place, even if they are actually miles apart. A scene calls for two actors to have a conversation on a park bench. One problem: one actor is in Chicago, the other is in San Francisco. With the power of video to connect distant places, you decide to make it work with a little movie magic. While in the Windy City you shoot an actor saying her lines to a stand-in on the other end of an ordinary looking park bench . The shot shows only the actor and part of the bench, not the person to whom she is speaking. After you’ve taped her half of the conversation, you jet out to the City by the Bay to shoot her beau. Framing him on the opposite side of the screen sitting on a similar bench, you ask him to recite his lines to another stand-in.

In the edit suite, you splice the two together to make a single seamless scene. Voil! The viewer never questions the fact that the two are in the same park, on the same bench, and the power of video to manipulate reality prevails.

Expanding Time
Space isn’t the only thing you can fiddle with. Time can also be made to obey your commands. You might build drama by stretching out the last few seconds of a basketball game or prolong a young man’s nervous walk to meet his girlfriend’s parents for the first time.

Want to make it look like the nervous boyfriend is walking farther than he really is? Keep him on the screen for a long time. Shoot him walking all the way from his car to the picnic blanket from the back, then again from the front. Have him make the walk again while you walk beside him with the camera, and another time while you shoot a long dolly shot of his feet. In the edit bay you show the long shot from the back, the closeup of the feet, then the tracking shot from the side. Because you have covered the scene from several angles, you can cut them together in a way that makes it seem as though the poor guy walks and walks, but never arrives at the picnic to meet the parents. In reality, he may have walked only 15 steps, but by editing several shots together it will appear to the viewer as if he takes 30 or more to get from his car to the blanket.

You can also shorten the amount of time it takes to make things happen on screen. You might compress a bride’s walk down a very long aisle or the time it takes an actor to catch a fish. No audience would watch a video where a bobber floated in a pond for 10 silent minutes before a strike. Spare them the agony by compressing the time.

In your scene a man casts his line into the stream, you cut to a closeup of the bobber as it is tugged under the water, then cut back to a shot of the happy fellow hauling in his catch. For that matter, you can make that fishing hole seem like a fisherman’s paradise by showing repeated casts followed by immediate strikes. It’ll look like the fish are jumping right into his arms – and, in the video world, they will be.

By using selective framing and juxtaposition of distant or near places to lengthen or compress time, you can create new realities for your viewers. So, let the scientists haggle over the nature of space and time. With your camcorder and editing computer, you’ve got the power to make your own reality.