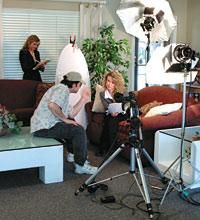 If you’re moving into that twilight zone between hobbyist and pro, you may be shooting videos that require performers and at least a small production crew. Since you probably can’t pay these volunteers, you’re probably like Blanche DuBois in Tennessee Williams’ A Streetcar Named Desire, "…dependent on the kindness of strangers," not to mention colleagues, family and friends. That means you’ve probably heard at least some of the following:

"I can’t shoot today, after all; something more important came up."
"The dog ate the red shirt we used, so I wore a blue one today."
"I refuse to work with that #$%%&*!! Stan."
"I just don’t feel like it any more."
This last bombshell often comes from your main actor, who already stars in an hour of essential footage, with another hour yet to be taped. If he or she walks, your show is down the tubes.
You can’t prevent every problem with amateur personnel, but you can pursue strategies to increase loyalty, improve reliability and stroke egos. So let’s look at how to locate likely cast and crew members, how to manage them during the shoot, and how to reward them for all that enhanced cooperation and hard work.

Looking for a Few Good Persons

Recruiting cast and crew are two different tasks. With performers, you can usually round up the usual suspects from theater groups and high school drama courses (when approaching students, it’s always a good idea to go through the school administration and faculty).
Crew members, however, can be harder to flush out of their hiding places. Lighting and sound techs tend to hang with the actors, and you can often find costume and makeup mavens there too. Videographers are easy to locate but hard to assess. Almost everybody has a camcorder these days, but how well can they use it? It’s safe to say that any candidate who has talent and experience also has demo footage to show you. (In reality, you’re probably going to tape as well as direct, so the videographer problem doesn’t always come up).
For less expert positions you can often tap family and friends, or approach fellow members of your club or congregation. Even the smallest production should recruit at least one grip to help shlep and a "gofer" to get props, pizzas and left-behind costumes. Energy and enthusiasm are nice-to-haves for these jobs, but any warm bodies are better than none at all.
For production management, however, only the best will do. On a shoot of any size, you don’t want to be wrangling arrangements while you’re trying to direct and videotape. Good production managers (but call them "producers," for reasons we’ll go into later) are arguably more essential than any other personnel on the set. Producers make lists, remember details, telephone people, put out fires and absorb gripes from malcontents.
For most projects, producers don’t have to know all that much about video production. What they really need is management skills and a head for details. On a shoot for business or industry, an in-house producer is an absolute must. A producer should know who to talk to, what to watch for, and where the company powers-that-be be. If it’s an amateur project, recruit a friend or fellow student who’s destined for greatness in Fortune 500 management or a Big Eight accounting firm.

Without a Whip and Chair

To keep your volunteers happy (or at least showing up) you need to schedule them, pamper them and massage their egos. First and most important, develop a comprehensive shooting schedule in advance so that people understand what they’re committing to. Too many amateur shows simply shoot every weekend until they’re done (if they ever do get done). After the second weekend, dropouts are as predictable as showers in April. If you really need eight days over four weekends, make sure everyone knows and buys into it in advance. (And then you’d better wrap in eight days, as promised.)
Keep shooting sessions reasonable: between four and eight hours. Long marathons foster boredom and exhaustion; short sessions discount the effort involved in showing up.
Above all, get an understanding of and active commitment to the schedule by everyone in your cast and crew. As the production goes on, you’ll need to remind the faint-hearted that they knew what they were promising you and that a promise is a promise.
After professional scheduling, the next best way to keep the folks is to pamper themat least as far as your laughable budget permits. Above all, feed and water your volunteers with pizza or tofu burgers (depending on ideology) and juices, sodas and coffee. Even bottled designer water shows how thoughtful you are.
Shelter is important too. If you shoot in a rain forest, desert or snow scape, provide more relief from the environment than just a few parked cars. For sun or rain, rig pop-up pavilions (40 bucks at X-Mart), or at least deploy blue tarps. In cold weather, arrange outdoor shoots near buildings. If you keep them out of frame, they won’t exist, remember? Aluminum lawn chairs are fine for sitting, and everybody has those, right?
And don’t forget potty breaks. You probably can’t afford a rent-a-john, so at least try to come up with portable camping potties and suitable privacy. When working indoors, scout the facilities beforehand and get permission to use them if necessary.
Speaking of indoors, always try to promote a staging area in every inside location, a place where hardware’s secure and where cast and crew can relax when not working. Another obvious service is parking. Don’t caravan eight cars up to East 89th Street in Manhattan and expect to find even one parking spot. There is nothing that peeves a volunteer more than spending half an hour trying to stash the car and another hiking to the shooting site.
Finally, you need to massage the egos of everyone in the company. Recognize good work, and remember, "criticize in private, praise in public." Keep your problems with an individual strictly between the two of you, but if you have kind words, make sure everyone else hears them too.
With actors, remind them that once they’ve finished a scene, they can’t be replaced without reshooting it and every other sequence they’ve appeared in. Use your judgement, though: a certain type of egoist will hold this indispensability over your head. Strange things happen to perfectly nice people when they act. An (ex) best friend of mine showed up a full hour late on every single call. Was he secretly frightened? Was he enjoying his power over everyone else? Who knows? But he kept 15 people, all of whom I was actually paying for, waiting for an hour a day!
Above all else, listen to people. Often their ideas are truly productive; and even when a suggestion is idiotic, the suggestor thinks it’s brilliant. Contributing ideas builds a feeling of ownership in the project, so welcome them sincerely.

Where Credit is Due

Though all these suggestions will reward and motivate your personnel, there’s nothing, no, nothing like screen credit. After all, credit and maybe a program copy are all your devoted helpers will get. Here are some tips for making screen credits as rewarding as possible.
First, make each job title as exalted as possible without being silly. Though "Production Logistics Facilitator" might be too fancy for "gofer," "Production Associate" is subtly more rewarding than "Production Assistant." (By the way, avoid cute titles like "Turnip Wrangler." Production insiders may laugh, but your general audience will be irritated by obvious jokes that they don’t get).
Next, use title pages (PowerPoint style) rather than rolling titles. You want to give your volunteers as much screen time as possible, but very slow credit rolls are also audience turn-offs. Instead, offer pages in series, each with three or four credits, like the example in Figure 1.
Here’s the secret: if you leave this title on long enough to read all three credits, the people will think they each have three times as much exposure because they’re looking only at their own names! (When planning credits you must know no shame).
Finally, let multiple credits stand alone. Instead of "Key Grip, Dolly Master, Best Boy and Cable Puller: ALICE B. STEIN," give Ms. Stein a separate credit, including her name, for each job she performed on the shoot.
In the final analysis, all this advice is simple common sense. But when you’re the writer/director/producer/videographer/editor of a complex project, it’s all too easy to forget that your seemingly eager assistants are really in it for what pleasure and reward they can get for themselves. And since your crew is probably not receiving monetary compensation, providing them with the professional courtesies outlined here should be enough to keep them happy, increase their loyalty and improve their reliability.