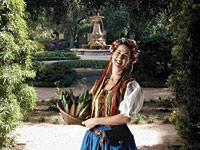 Recently some video students of mine needed a Rennaisance-esque palace set for his Royal Rottenness the evil King of Poltroonia, so they used Pasadena City Hall. (You’ve seen it in dozens of commercials and movies.) Two problems popped up at once: the cars and modern buildings didn’t quite fit a Renaissance kingdom and the U.S. and California flags sorta gave the game away – to say nothing of the gaudy banner in the archway .

The students faced a problem common to many videographers: how to morph the location you have into the location you want. You can use one or all of six basic processes of set creation. Some of these processes happen during production: dressing, framing and staging. The others are part of postproduction: connecting, reinforcing and just plain fixing.

Returning to the example, when the students shot their raw footage, they framed an establishing shot that excluded the cars, the pedestrians and the office tower . In postproduction, they matched the shot with an angle on a tiny home-built set of a merchant’s stall, thereby connecting two different real-world places to synthesize a single screen locale. To reinforce this synthesis, they replaced the production soundtrack with an audio background of clip-clopping horse hooves and grumbling wagon wheels that ran under the entire sequence. Finally, they utilized Corel PhotoPaint to fix the establishing shot by losing the banner and converting Old Glory into the craven yellow flag of Poltroonia.

Admittedly, Pasadena City Hall is unusually good for movie backgrounds because it can be so many different places. But even if you lack outstanding video backdrops like this, you too can achieve almost anything, anywhere by using the six basic processes of set creation as follows.

Once you’ve settled on a location, the first trick is to customize it by what’s called "dressing the set." That means removing or concealing unwanted items and adding decor and props that help sell the fictional locale.

Since the students were working quick and dirty, they couldn’t really dress the front of City Hall. If they’d had professional resources, they might have subtracted the flags and banner (which they did instead in post). For a closer angle on the building entrance, they might have added hay on the steps and some costumed extras (who count as set dressing) in the background.

Finally, they might have finagled a wider establishing shot by draping canvas tarps to suggest the edges of market stalls, thereby masking the foreground cars (The overlaid graphic in Figure 3 supplies a rough idea of the effect).

Why would a professional company have these particular materials with them? Because they scout locations in advance and pre-design their set dressing. You should too. If you need, say, a football coach’s office, round up some team photographs to dress the walls and spot a few athletic trophies in the foreground, where the camera can shoot over and/or through them.

As we have said in previous articles, if it’s not in the frame, it doesn’t exist. To make this fundamental movie truth work for you, think of each location not as a place but as a collection of potential backdrops for the images you’ll create. The top half of city hall became a palace because the students framed off the cars and the office building. They created the "market stall" from a blank section of rough stucco wall between a home kitchen window and a patio door. By framing off those giveaway modern details, the videographer simply erased them from the scene.

You can quickly preview proposed frames by using a director’s viewfinder. Though professional models are expensive, you can make one for pennies (the sidebar shows how). To use your viewfinder, isolate potential setups in the cutout window, "zooming" by moving the cardboard nearer to or farther from your eye.

If you can plan your action strictly in accordance with what’s contained in your selected frames, you can make very convincing screen environments.

By itself, however, framing can’t do the whole job for you. The problem with an aggressively framed world is that it feels enclosed and limited. To overcome this claustrophobic feeling, you can use the very same power of the frame to extend the world on the screen beyond the limits of your image. (Remember: the corollary of the first law of movie space is, if it’s not in the frame, you can imply that it exists.) There are two main ways to pull this off.

First, compose your shots so that set elements bleed out of the frame. Even if they extend only a foot or so in real life, they’ll seem as if they continue on indefinitely. To enhance the effect, shoot diagonally wherever possible to sell a feeling of depth .

Next, block your action so that subjects enter and leave the frame. This reinforces the feeling that their environment continues beyond what viewers can see. In blocking entrances and exits, make sure your screen directions allow the editor to cut different real-world locales together, as explained below.

Finally, when subjects are in the frame, have them look at and otherwise relate to the off-screen elements you are suggesting. For instance, if they’re on a "dock" beside the "Titanic," have them crane their necks as they strain to see the "passengers at the railings" 50 feet above them.

With production footage that’s well dressed, framed and staged, a good editor can really go to town. The first step is to synthesize screen environments by connecting elements that are separate in the actual world.

First, use every opportunity to match both action and screen direction so that subjects proceed seamlessly from one locale to the next. If there’s an implied distance between points A and B, leave the A scene empty a beat after the subject has exited; then cut to the B scene a beat before the subject enters. Those two empty beats give the subject apparent time to cross from one to the other.

Next, use cutaways to stitch independent images into the sequence. To motivate these color shots, you can use the classic "glance-object" shot pairing. In shot 1a, a subject looks off-screen at something. Shot 2, the cutaway shows what the subject is looking at. Shot 1b resumes the first angle as the subject looks away from the contents of shot 2. Audience conclusion: locales 1 and 2 are in the same place. To illustrate, as our heroine walks through the market place (the City Hall location) her eye is caught by a pitiful beggar, pleading for alms (shot in the backyard market set).

Concerned, but penniless herself, she continues walking (City Hall location). The "glance-object" technique makes it seem like they are in the same place at the same time.

This sub-sequence will work even better if we hear, off-screen over shot 1a, "Alms, kind lady; alms for the poor!" before she turns to look off-screen. This "split edit," as it’s called, layers the sound of the set over the image of the location for a smooth transition.

You can also add sound reinforcement with sound effects and ambient noise. A rich sound track will have bleating goats and clucking hens and vendors’ cries in the background. Underneath it all, a track of outdoor rural ambience replaces the Pasadena production audio completely. This uniform background runs continuously under the entire sequence, so that both set and location shots have exactly the same audio environment.

Depending on your dramatic needs, you can add extra continuity by running music through the sequence as well.

Computer-based digital editing lets you keep right on building and dressing sets in post-production. First, you can use color balancing to stitch different locales together. At its simplest, this means tweaking the color of secondary scenes to match your primary location. To carry this a step further, try giving a new color tint to all shots – say a sunset glow, or the eerie gunmetal atmosphere before an afternoon storm.

Next, use your preferred graphics programs to paint out those unwanted flags, banners and whatnot. (Hint to the director: the less camera and/or subject movement there is in an establishing shot, the easier it is for software to semi-automate the digital paint-out process.)

The final step is to combine different elements through digital compositing. There are two ways to do this. You could composite your subject into a different background. Or if your actor is already in, say, the City Hall establishing shot, you could composite in those tarps you need to mask foreground autos. To do this, simply align elements on the fly, adjusting the camera and tarps against a chromakey background to fit the City Hall image on your working monitor. (Hint: those tarps could be table-top miniatures, for easier management.)

If you have the patience (and the computer horsepower), you could make a three-layer composite with the background as source A, the actor as B, and the foreground tarps as C.

A final tip: no matter how proud you are of your results, give composites only as much screen time as absolutely needed. Even the best work will give itself away if it sits there long enough for viewers to study it.