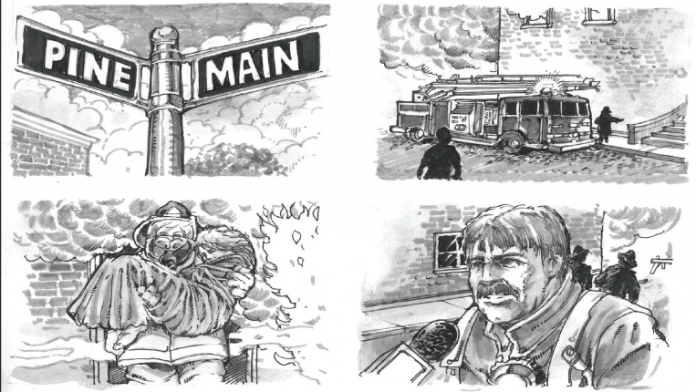 Thunder rumbles over a darkened city. A woman dressed in high fashion looks up at the sky. She opens her umbrella as raindrops fall and polka-dot the sidewalk. The woman hurries into a nearby alley. She stops as she sees a man standing in her path. Rain drips from his wide-brimmed hat. The man grins, showing broken yellow teeth. Lightning flashes in the sky. The man lunges at the woman. She spins her umbrella, raking it across the man’s face. He falls back and hits the pavement. The woman runs

This scene could be from a movie made in Hollywood, Hong Kong or almost any city in the world. Have you ever watched a foreign film with no subtitles? Were you completely lost or could you follow the story even though it was in an unfamiliar language? Chances are you could get the gist of it even without the benefit of dialogue.

A language is more than a collection of words, written or spoken, based on region or ethnicity. In the broader sense, language is a system of terms, symbols and syntax used to generate and communicate meaning. Visual language allows us to record ideas in a way that is more universal than spoken words.

From ancient cave paintings to modern interactive games, humans have excelled at visual storytelling. Cinema is a relatively new media whose stories transcend geographical boundaries. Since the dawn of moving pictures in the 1890s, cinema has evolved as a language spoken across the globe. Fortunately, this universal language is far easier to learn than a foreign dialect.

Written language uses letters, words, sentences and paragraphs to convey a narrative. Cinema uses shots, shot sequences, scenes and dramatic sequences. Using language as an organizational structure can give your video greater narrative impact and broader appeal. They say a picture is worth a thousand words. A moving picture is worth even more.

The language of cinema starts with the shot. In film and video, a shot is a series of still image frames that runs for an uninterrupted period of time. Like a letter in written language, the shot is the smallest piece of visual language. However, a shot is closer to a word because it communicates much more than a single letter can.

Depending on its elements, a shot can tell the entire story or just a tiny piece. These elements include the shot’s duration, camera angle and movement, sound, lighting and all the visual design of the production that comprise its “mise-en-scÃ¨ne.” If an actor or actors are in the shot, their physical performance and emotions can also communicate more than dialogue.

A shot sequence is a collection of shots that communicate an idea, just as a collection of words form a sentence. A sequence can be long or short, using many shots or a few, sometimes using only a single long take. Just like the order of the words matters in a sentence, the order of images are important in cinematic syntax. Film scenes often start with a wide shot to establish the location before moving closer to the talent or action. But this isn’t always the case.

Just like the order of the words matters in a sentence, the order of images are important in cinematic syntax.

In our opening example, you probably pictured a wide shot of the city and storm clouds first because that’s what was written in the first sentence. However, for a different emphasis, the scene could open with a close shot of the woman’s fashionable shoes as she walks on the sidewalk. The first shot sequence would include her reaction to the rain and end when she runs to the alley. This is a new location, beginning a new shot sequence even though the action is continuous.

In a montage sequence, shots of different locations can be combined because they are communicating a single idea with compressed time. The boxer trains over a period of days. The villagers build a bridge. A shot sequence can also illustrate the juxtaposition of opposing ideas or characters in order to compare and contrast them, or establish a relationship between them. Like a montage, a juxtaposition sequence compresses time with shorter shots.

So what’s the difference between a shot sequence and a scene? A shot sequence communicates an idea, while a scene depicts a narrative event in the story. If a shot sequence is comparable to a written sentence, a scene is a paragraph. The event of our opening example is a woman fighting off an attacker. This is a complete scene, but it could continue into a dramatic sequence if the attacker gets up and chases the woman.

A dramatic sequence is a collection of dramatically linked scenes that communicates a complete narrative idea. It is comparable to a series of paragraphs or a chapter in a book. Scenes of different locations and characters are intercut to tell the story. We could expand upon the example scene with scenes of police searching for the man intercut with scenes of the wanted man chasing the woman.

Just like in writing, the message you’re telling visually should be clear and refined. Build your scene like a writer building a paragraph. Your cinematic structure starts with individual words (shots) combined into sentences (shot sequences).

Think about the idea you’re trying to communicate and simplify it to a sentence. We can break down the example scene’s shot sequences into the following sentences:

Consider the importance of each sentence as you combine them into a paragraph that describes the narrative event of your scene.

“Cut to the chase” is a popular saying among filmmakers and editors. This doesn’t mean every scene must be cut with the frantic pace of an action sequence. It means you should leave out ideas that are not relevant to that particular scene. Stay focused on what you want each shot to say.

Your message can be made clear by following the conventions of cinematic language. For example, low-key lighting makes a scene more dramatic. Soft lighting and focus creates a dreamy atmosphere. Rapid editing ups the excitement. A tight close-up emphasizes importance. Every image and its timing should tell a part of the overall story.

When using language as cinematic structure, you should also consider your punctuation. Does the sentence end with a period, an exclamation point, or a question mark? This can determine the shot sequence duration, how quickly it’s cut and the transition to the next sequence.

Becoming fluent in the language of cinema takes study and practice. Break down a scene from your favorite movie. Observe the timing of each shot. If you changed the order of shots, how would this change the story? Language and cinema are about communicating and expressing ideas. Practice using language as organizational structure to better express yourself through film and video.

Sidebar: The Long Take: When a Shot Becomes a Scene

Sometimes a scene can be a collection of shots connected by camera movement, or even a single shot where the entire narrative is depicted without any changes to the camera or background. Films like 2015 Academy Awards winner “Birdman” even use hidden cuts to give the illusion of being filmed in one take.

There should be a reason for your long take. Does it depict a character’s isolation? A group of misfits finally working together? How does it connect its images, and why? In cases where the camera itself is a character, like found footage films, its point of view mimics the human experience of events without unnatural cuts.

A scene filmed without cuts can still be broken down into sentences for each idea you’re trying to communicate, and those sentences translated into shots or sequences. The long take seamlessly connects the sentences.

Joshua Siegel is a filmmaker and graphic artist.