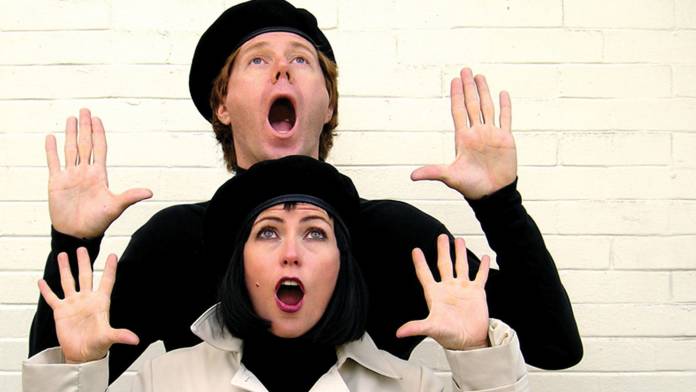 Make contact with stage actors in your community and you’ll find that if they haven’t already performed in front of a camera, they’ll welcome the opportunity to pad their portfolios and take a shot at screen acting, especially if you’re packing a dynamite script.

Should you be so lucky and attract an enthusiastic band of thesbians willing to go on the adventure with you to make your film, you’ll be doing plenty of tutoring to ease your ensemble into the new medium. But your efforts will be rewarded with disciplined effort and the boundless imagination stage actors can bring to your story.

This article is a toolbox of techniques and strategies for coaching novice movie actors through their transition from stage to screen.

But first, a reminder of how film and theater really are two different worlds.

Why would you not want to harness the amazing training and experience stage actors can bring to your film set?

In online banter on the subject, one recurring analogy is that theater is like a band’s live performance and filmmaking is recording and manipulating a performance in a studio.

Live theatre has been likened to three hours of surfing on a wave. The actors ride the material and by sheer force of performance, energize the play and bring the story to life from beginning to end — in one go. The audience response is immediate.

Like a band in front of a live audience, stage actors only get one take. There’s no fixing it in post.

Theater is an actor’s medium. The director does most of the directing in rehearsals. But when the curtain rises, the actors are in charge of what the audience experiences that night and every night.

Film is a director’s medium. She is the grand conductor of all creative elements in a film. The director decides what the audience sees, what they hear, and through her actors, how the audience feels.

It takes tremendous teamwork, resourcefulness, creativity and stamina to pull off a theatre performance that will have the audience applauding on their feet. It’s a no-brainer for indie movie directors then — why would you not want to harness the amazing training and experience stage actors can bring to your film set?

The tendency for theatre actors just starting out in film to act large in front of the camera is renowned and expected when the actor’s job is to project voice and body language to the rafters.

On set sound technicians and their ubiquitous boom mics will soon train stage actors to dial down the volume. But how does an actor dial down the physical expression and avoid trying to fit an over-emoted, “theatrical” performance into the lens?

In a legendary 1987 BBC workshop on film acting, Michael Cain talked to young actors about this.

Cain was teaching camera awareness because, in film, all performance, all action happens within the camera’s frame. Make your stage actors aware of what’s in the frame, what the camera sees in every shot and every take, which is everything. That uproarious guffaw the actor projected to the last row in the theatre will look over the top in a medium shot and downright silly in a close-up.

“Film is relaxation,” he said. “If you’re knocking yourself out, you’re not doing it right.”

In theatre, the director and actors shape performances in rehearsals. Rehearsals on a film set? It’s not going to happen. Time is money — there will be no practicing while a highly paid crew sits around and watches. But as director, there’s plenty you can do to help your actors transition from stage to set and be ready for that first take.

Film actors are expected to deliver identical performances for each take, dialogue and any physical business. If you don’t have a script supervisor on set to catch continuity issues from one set-up to the next, your actors will need to pay extra attention to blocking and continuity details.

For example, if the glass wasn’t in the same hand in the medium shot as it was in the master, and if the actor delivered the line after taking a drink instead of before, the shot is useless and expletives will fly in the cutting room.

Encourage your actors to plan and diligently practice their moves and handling of props before they come on set so they can repeat the action exactly the same way on every take.

On retakes, remind actors that it’s not necessarily about shooting until the actor gets it right but that multiple takes are often for the security of the director so she has choices in the edit room.

Theatre actors commit entire plays to memory and perform their character arcs on stage in real time as the play unfolds in sequence. A film actor performs whatever script pages are scheduled for the day’s shoot and the script is never shot in sequence. A screen actor can find himself in the last scene of the movie on the first day of shooting.

For a stage actor, this can be disorienting. Even experienced film actors resort to a simple trick that helps them keep track of their character’s place in the story. Have your actors write out summaries of every scene they’re in on cards, a card for each scene, and stapled together in the right order, make sure they bring them to every shoot.

This handy little guide reminds actors of the objective of today’s scene so they can orient their performance according to what happened to their character in previous scenes.

While theatre actors inhabit their characters for two hours or more of continuous and unmediated live performance without cuts, film actors do their work in small units of performance we know as scenes, several minutes long at most. And there is plenty of mediation i.e. directing, and there will be “cuts.”

How will an actor trained in theater summon up a performance in the short bursts required in filmmaking?

In an interview on screen acting, Charles Doherty (“Slackers,” “The Drew Carey Show”) offers this nugget for achieving authenticity, “In film, anything that smacks of acting will be seen. Go in front of the camera and live, don’t act.”

The best way for an actor to do that is “to be in the moment.”

Being in the moment is an elusive performance state for even the most seasoned actors. It means to be in a heightened state of awareness of where you are and what’s going on around you in the scene. It also means taking each thing as it comes, dealing with what’s in front of you right here and now, not in the future, but now.

Michael Caine says listening is the most important thing to do in film acting. “Hold the eye of the other actor in the scene, listen very closely and react.”

By putting his focus on the other person (in the scene) the actor will stop thinking about himself and remain “in the moment.”

When was the last time you saw a play? If the idea of asking stage actors to be in your movie is something you are seriously considering, you should go to the theatre and see some plays. You’ll be impressed with the discipline, intelligence and imagination on display.

If you go to plays on a regular basis, you will already have given thought to the many intersections, similarities and differences between the two performing media, film/video and theatre. There is plenty of literature and online information about acting for the camera and how to transition from stage to screen. Explore these resources, share them with your novice film actors and discuss your discoveries.

One final thought for your cast of theatrical collaborators: film acting is less about showing your emotions, and all about having them.

Run a safe set where actors can feel free to bring ideas to the table. For example, self-consciousness about the lines can compromise the authenticity of a performance. If a line is awkward, have the actor fix it so it comes out naturally.

Once technical set-up and camera rehearsals are done, spend all your time with your actors and their performances.

Before casting stage actors for your movie, encourage them to visit a film set or two. They can see the rhythms and protocols of a shoot in action and are less likely to be put off by the inevitable “hurry up and wait” lifestyle of a film actor.

When breaking the fourth wall (performing to camera), speak to only one person.

We all have seen scenes featuring directors with their berets and megaphones, yelling orders to their actors. It should come as no surprise that...