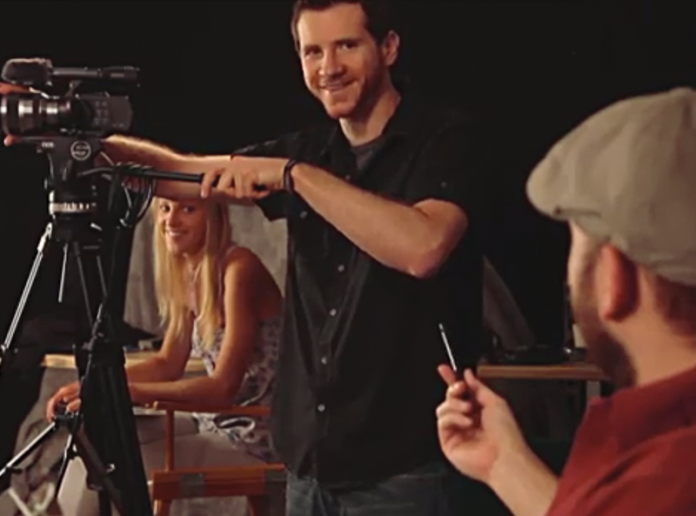 They say you’re as good as your last job. This holds especially true for filmmaking. If you want somebody to fund your movie and you want to direct, the first thing your producer-backer will ask is, “Show me your reel.” And therein lies the rub. Most fledgling filmmakers don’t have a reel — yet — at least not a reel that contains the kind of quality and sizzle that inspires confidence in a prospective producer-investor.

What makes for a good reel?

So, how do you get there?

Pull up your director’s chair and let’s chat about how keeping your hands off the camera might just make you a better director.

Own the script, know what you want up on the screen, communicate that with confidence and then get out of the way.

Here’s the deal about starting out as a filmmaker. Whether you’ve been to film school or whether you attended weekend intro-to-moviemaking workshops, chances are you were all over the camera, shooting and lighting as well as directing. This is as it should be. You got up close and personal with the craft of cinematography and the job of the director of photography, the Director of Photography, or DP.

But now you’re ready to step it up a notch. You are serious about making a living as a “serious” filmmaker. You want to make movies that get attention for riveting storytelling and accomplished directing.

Maybe in your life after film school, you played the lone wolf operator as shooter, director and editor on a no-budget zombie movie or maybe even on a paid gig, a corporate video or two. These are all notches in your belt, but if that’s what’s on your reel, these early samplings won’t get your “serious” movie financed.

THE LENS IS YOUR EYE INTO STORY

It’s no secret there are celebrated directors who can’t keep from fiddling with the lens and are actually not bad shooters. James Cameron and Stanley Kubrick come to mind. The latter’s shooting chops went down in cinema lore on “2001 A Space Odyssey,” with this oft-told tale: after many takes, Kubrick’s camera operator couldn’t quite frame up that iconic slow-motion close-up of the animal bone soaring high into the air after the monkey whacks it. Move over Rover, let Stanley take over — Kubrick nailed it on the first take. It’s his shot you see in the movie.

Cameron can be excused, he’s a tinkerer, a cinema technology innovator. Kubrick came from still photography, so he knew lenses. And so should you. The lens is the director’s eye into the scene, into the story.

Depending on scene content and the purpose of a scene, you want to be sure a lens with appropriate characteristics is mounted. You know for example that a fixed wide-angle lens will produce an entirely different look and feel from that of a zoom lens. But this doesn’t mean you rummage through the lens case yourself, pick out your glass of preference and snap it onto the camera.

And conversely when your DP suggests a lens selection and her explanation is riddled with technical DP-speak, you want to be able to understand what she’s talking about and be confident her suggestion matches what you’re imagining.

A useful tool for setting up your shot and communicating your cinematic vision is to scope out every shot with a director’s viewer or viewfinder, sometimes called a lens finder — the short telescope that you see dangling from Hollywood directors’ necks. Looking through it, you see exactly what you see when you look through the camera viewfinder. The viewer lets you select camera formats, aspect ratios and some call it a lens finder because you can also select the focal length you want to shoot with. So you can say to your DP, “I want to shoot this static, cowboy (hip height) on a 24-mill.” You can end up spending between $200 and $700 on a decent professional director’s viewfinder.

To be honest, DPs find technically-minded directors uninteresting to work with. And yes, you should know about lighting and how it can support the story, but don’t spend time futzing over where fixtures should go. Discuss the look or the mood of a scene with your DP but then trust her to do the work by letting her interpret your vision with fresh ideas of her own.

So, know your cinematography and your visual storytelling, but make sure your collaborators contribute their special knowledge and experience to make your film the best it can be.

This frees you up to concentrate on the most important tools in directing, the script and your actors. Emotion is everything in a film, that’s what audiences remember. Once you’ve communicated the technical requirements of a scene, don’t hang with the crew to see how they do it, go spend time with your actors and with the script.

SHOOTING COVERAGE IS NOT DIRECTING

If you’ve had any kind of production training, you've been schooled in the mechanics of coverage — shooting a scene or an action from a variety of camera angles and with different shot sizes — shooting for editing. In fact, if you’re a newbie director, you’ll be preoccupied with coverage. But shooting coverage is not directing. Directing is knowing your screenplay, the purpose of every scene. Your job is to make sure that it all ends up on the screen, whether the scene advances the story with a plot turn or whether it’s meant to signpost a transformation in the protagonist’s character.

Reading the screenplay should make your imagination soar, you can see with your mind’s eye how you will shoot a scene and how you will cut individual shots together in editing, but knowing the purpose of a scene is what will inform everything you do as a director.

Looking through the viewfinder yourself when the camera rolls, and making sure the framing is just-so and your camera moves are perfect, will take up all of your concentration with little room for attention to scene content because you’re only thinking about one thing: the shot.

As director you should be concentrating on what your actors are saying and doing, how they’re moving, is it working for the scene, for the story, is it authentic, is it believable?

SEARCHING FOR YOUR DP

So, how do you get an experienced DP to work for you?

Browse online filmmaking hangouts. Here you find out who is doing what; Craig’s List is good for that. Go to their film and TV jobs board, that’s where you see what directors are looking for in a DP. Mandy.com is a great comprehensive production web portal that deals only with film, TV and video jobs.

When putting out a call for a camera crew, make your project irresistible and interesting without overhyping it. Explain your film, your passion for it and your production realities, lo-budget or no-budget, and see where that goes. Chances are that if you’ve communicated your project well and authentically, someone with significant cinematic chops might just want to talk to you about DP-ing your indie film.

Add to this exquisite people skills. Coming across as someone who can get things done will be just as important to luring a professional to your crew as your command of the story.

When the applications for DP come in, you can easily check a cinematographer’s work on her website to see if her work matches what you’re looking for.

Scouring the online filmmaking discussion groups on this topic there’s a consensus that says, when you’re ready to make filmmaking your profession work with a DP from the outset. Keep your hands off the camera except when the DP asks you to check what she’s got lined up in the viewfinder.

As a “serious” indie filmmaker, the best thing you can do for your film is to be prepared.

Read the script several times and make notes for every scene. Write down your visual ideas and the purpose of the scene in the overall story.

Then start making lists: make a list of actors and extras; make a list of locations and indicate how long it will take to shoot at that location — what technical challenges might that location present; list your props, wardrobe requirements and other production elements, such as vehicles.

A script breakdown document is useful for identifying everything you need for every shoot and set-up. Breaking down the script is typically done by the first assistant director or the production manager. But on an indie, low-budget project, be prepared to do a lot of this work yourself.

With production documents in-hand and an intimate understanding of the script and its production requirements, you have a solid foundation for bringing a worthy film to the screen. And most important, you now have some resources that will let you communicate effectively what you want and need to cast and crew, especially to your DP. Filmmaking is a team sport, let your team play.

Take off your technician’s cap, sit down in your director’s chair and focus on story, story, story.