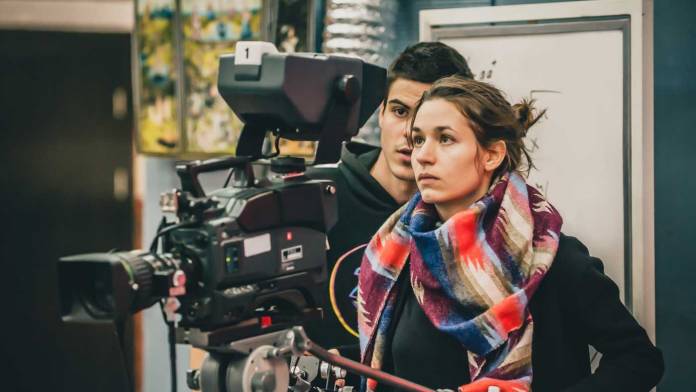 As a film director, you want to make sure that your commands are understood when directing film talent and film crew pros. For this to happen, using the proper terminology is crucial. If talent and crew donât understand what you are talking about, the making of your documentary film or video can turn out to be a disaster. In addition, knowing your film crew roles is just as important. The terminology of cinematography is unique, at times possessing vÃ©ritÃ© meaning. As a professional filmmaker, you should know how to use it in order to convey your vision to your film talent and film crew pros.

Have you ever wondered what the words “Cheat,” “Print,” or “Coverage,” mean? When would they be used and why? Do you know what your film crewâs roles are, or a videographerâs exact job description is, or what the different types of shots are?

If youâre an amateur video creator, you should get accustomed to using the video and filmmakerâs terminology. After all, you are not going to be an amateur director forever, right?

Why is it important to know the proper terminology?

Itâs important to sound and act like a professional filmmaker if you have any aspirations of working with a crew one day. In this article, we will explore some of the more-often used words when making a documentary film or any other type of production for that matter. The following terms are some of the more commonly used jargon throughout the movie making industry.

Named after production manager Abby Singer, this term refers to the second-to-the-last shot in a dayâs shooting. Singer would call out “last shot of the day!” only to have the director ask for more later. An Abby Singer is similar to a martini shot.

Just about everybody knows what this one means. This is what the director yells out after the set is quieted and the events of the shot need to take place. It signals the talent to start acting and for everyone else on the set to be completely quiet except those doing roles that support the actorâs performance.

The best boy is usually the gafferâs main assistant, in charge of scheduling the crew and equipment needed for each dayâs work. Gender and age donât make any difference here – itâs a title from the old days that has stuck.

Call time simply refers to the when film talent and film crew pros are to report to the set of a film.

When a scene is shot through to the end and it is believed to be a good one and to be kept, a crew member, usually the first assistant camera operator, will remove the lens from the camera used to shoot the scene. Then he or she will open the aperture so that they can see down to where the film is exposed.

The first assistant camera op will then check for debris and such. If there a speck of debris or dust, this means that everything that was filmed has been compromised and is unusable. Such scenes will then need to be reshot.

However, with the insurgence of high definition cameras, the term Check the Gate is becoming a thing of the past. The reason is that high definition cameras are very tightly sealed, thereby keeping their inner workings free from dust and debris. There usually is no need to check the “gate” when shooting with a digital camera.

Cheat or cheat-cut refers to a cut in the editing process that shows continuity from shot to shot, when in reality the shots being edited together come from different sources. Sometimes a shot is “borrowed” from one scene and edited into another. This provides a flow to the scene giving the audience the feeling of continuity.

The second meaning of this word cheat is a blocking term one might hear on the set when a person is facing a camera, a prop or another actor and is told to cheat to the camera, prop or fellow actor. It means to orient a bit towards the camera. Cheat to the chair or cheat to Sally might mean to face that prop or person.

This term refers to the shooting of a particular scene from different angles. This way, extra footage will be available during the editing process. When a variety of angles are available, the scene can be edited in a way that will provide depth and even vÃ©ritÃ© meaning or emotion to it.

This is another common movie-making term that most people are familiar with. It actually has several meanings. One is to stop the talentâs acting then is followed by stopping the cameraâs recording. It does not, however, always mean that the scene was a good one and a keeper. Another meaning for Cut is to change from one scene to another. And yet another way it is used is when referring to the editing process, when scenes are cut in a way that will tell a story.

Dailies, or “rushes,” as they are also called, are the pictures and sound that are shot each day which can be viewed by the director and film crew pros. This allows for the opportunity to select the best takes. Dailies are usually viewed before the next dayâs shooting.

A set dressing is an object on the set that is not a prop. Film talent can talk about and touch set dressings. A telephone can be a dressing. However, once an actor uses the dressing in a scene, such as picking up the phone and talking on it, the dressing then becomes a prop and shouldnât be moved again.

The gaffer on a film crew is the head of the electrical unit. He or she is responsible for overseeing the lighting plans on a film.

A hot set refers to when crew members have completed preparing a set for the filming of a scene. All furniture and props in the scene have been set into place and the set should not be disturbed or altered in any way.

This is considered the last shot of the day – the next shot should be served in a glass since it was a long dayâs shoot!

When the director yells print after the shooting of a particular scene, this means that the scene is good and it is to be kept. Another word for the term print is “Hold.”

Pickup shots may be shots that are pre-planned. They are shot after the main shooting has ended. For example, a scene with principal actors is shot one day. Then the next day is dedicated to shooting pickup shots, quick shots to fill in detail for a scene. Closeups of props and cutaway shots can be pickups.

Striking refers to removing an object from the set or scene, as in striking equipment from the set at the end of a day or striking a lamp from a particular scene.

The above terminology is so important when directing film talent and film crew pros that it is taught in video production schools. Knowing your film crew roles is just as important. Cinematography, like any other industry, has its own language and it is important for directors to know how to speak it. Clear communication in directing film talent and film crew pros can make the difference between a good film and one that is spectacular.

Sidebar: A Rose by Any Other Name.

An interesting filmmaking term is C-47. A C-47 is simply an ordinary clothespin. But, as the story goes, a prop person or director needed some pins to grasp a prop or dressing and worried that asking for clothespins might not fit “movie set gear” terms and the expense would be denied. So he or she decided to call it by the position on the movie set gear list: by the line item 47, in column C, which said “clothespins.” Because they are usually wooden clothespins and do not conduct heat as easily as plastic or metal, they are often used to attach a gel or diffusion on a hot light. It is not uncommon for film crew pros to keep several C-47s clipped to their clothing to use immediately.

Teresa Echazabal is a freelance video editor, writer, and producer.