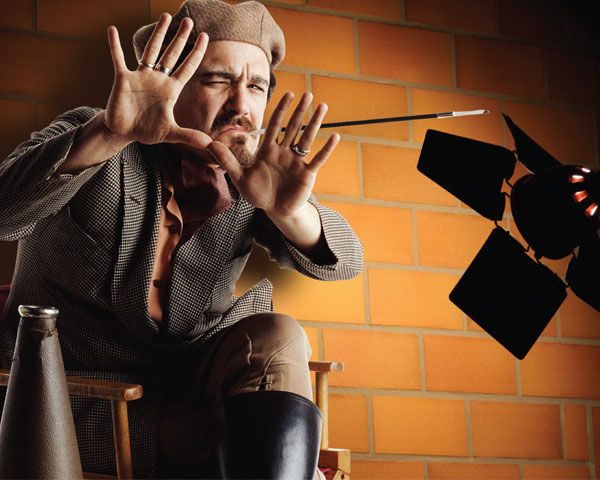 A Newbie Director can be overwhelmed with thoughts and worries, easily overlooking the High Five Essentials that will end the production with energetic “up high” and “down low” slapping of hands by all involved. It doesn’t take long before ordinary video producers will be stuck with the need to direct other people. This article will help you avoid taking on the responsibility cold turkey, having no idea what to expect.

When at all possible the first essential to a successful directing debut is the pre-production meeting. This is where you get the opportunity to address many of the things that go beyond telling your talent where to sit, stand or move, (what they in the industry call “blocking”); teaching them how you want them to emote (energetically, seriously, pensive); and instructing them to when you want them to say something, or nothing.

If this is your puppy and you’re the director, producer, shooter, audio engineer, editor and eventually the distributor, you need to plan ahead as much as possible to ensure that when the time comes, little is lost to ill-prepared talent. Avoid unanticipated consequences of everyone showing up with pre-conceived notions of what they need to do that are opposite of what you expect. This is where meeting before the shoot helps and it is an essential component of the directing process.

Let’s look at a real-life situation. Brittany is a young entrepreneur who wants to start an Internet T-shirt design website – B’s Tees. She wants the conventional components of a website and a blog to drive traffic to her website. She also is very aware that video is an essential ingredient of her marketing strategy. Of course she wants to be the star, the talent, and her business spokesperson, yet she has no experience. That is where her friend the newbie video enthusiast (you) comes in. Willing to help set up the video series Brittany will use to highlight her Internet business, you, her video friend, are also doing this for the experience and knowledge you will gain. 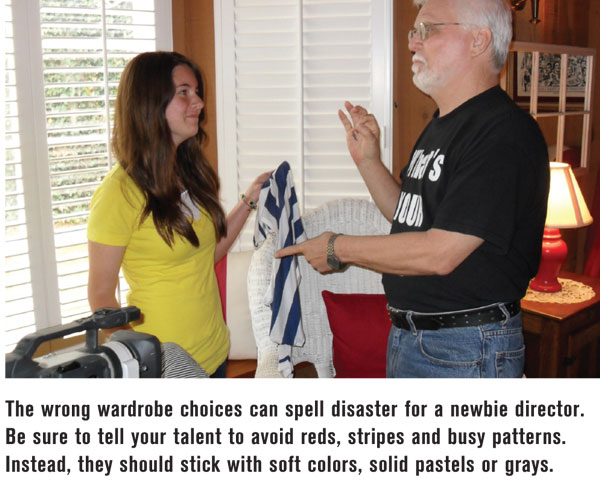 There’s more, much more, to directing than calling the shots and giving orders during the shoot. First and foremost is advising the talent what to wear . This might not be your idea of directing but it should be included in your High Five Essentials. The wrong apparel can make or break the production or cause delays and loss of valuable time while changes are made because you didn’t advise the on-camera person to avoid reds, busy patterns or multi-stripe designs. Stay with solid pastels, soft colors and grays and your directing debut will be off to a good start.

This is something better handled before the shoot, during your pre-production meeting. Other High Five Essentials include discussing the script, the shot sheet and the set. These are all best handled prior to the actual shoot. If your producer is also your client and the talent, it’s a good idea to have several discussions leading up to the day of the shoot.

Now, when Brittany and her director/videographer show up on the day of the shoot they’re prepared at least to present the right visuals to ensure the look of the production is a good one. 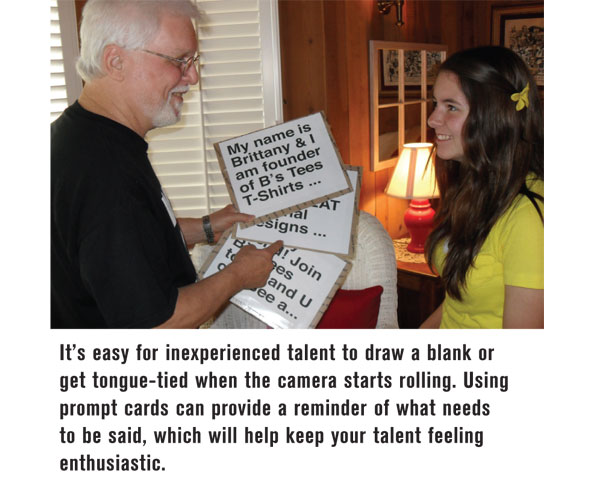 Brittany should have an idea of what she wants to say. So should her director. That means a script and this is something with which the talent and director need to be familiar. Nothing will squash your talent’s enthusiasm or your directorial debut like winging it, going in with no idea of what needs to be said. Directing talent is an important role you will need to master.

If nothing more at least have a few prompt cards handy to help your T-shirt entrepreneur stay focused on what she wants to say when you cue her that the camera is rolling and give her the countdown to start speaking. A half-dozen prompt cards that can be held just below the camera lens when needed is far better for both the inexperienced talent and newbie director than expecting smooth sailing as an extemporaneous speaker. Professionals who spend their entire careers making special presentations to thousands of people from the stage will freeze up, get their tongues twisted or drop their lines during a one-to-one session between them, the director and camera.

Trust me, you as the director (regardless of what other hats you may have to wear at this production) have to be familiar with what needs to be said. So use prompt cards, shoot short takes after discussion of what is to be said when the camera starts rolling and you cue the talent, or be prepared for the estimated two-hour session to take all day – if you have the time and energy to keep directing.

This is another essential that often gets tossed out the door during a burst of creative spontaneity. A first-time effort between Brittany and her videographer/director might not sap all their energy and they might have all day or the weekend to get it right, but this isn’t a good habit to start. Sooner or later you’re going to want and need to hone your directorial skills so you know you can get it done in the planned or scheduled amount of time. Be aware some rehearsal time is required.

Directing can actually be fun, not only for the director but for the cast, talent and crew as well. Having time to gear up for the shoot, taking a run at the lines or sound bytes prior to shooting the sequence can go a long way toward improving the fun factor. This time alone will generate miracles during the shoot and the director will get much of the credit for making them happen – if rehearsal time is planned. 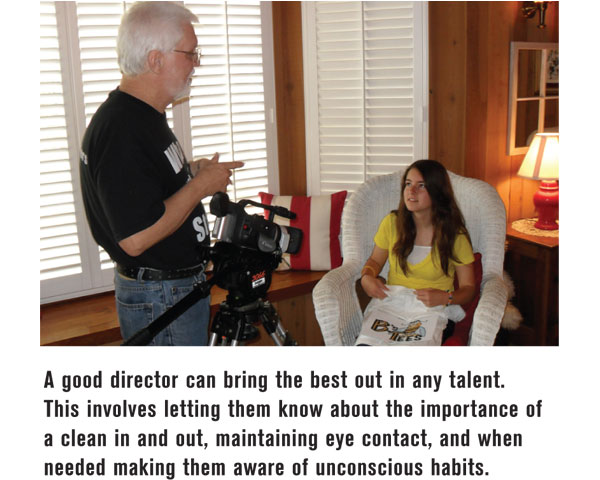 Brittany and her director know how to look, what to say and are comfortable with the schedule. Now it is time to actually direct. Certainly directing is a High Five Essential, but actually directing means letting the entrepreneur spokeswoman know about clean in, clean out, waiting for the cue, maintaining eye contact with the camera (or off-camera if that is preferred) as well as making her aware of unconscious habits – twitching nose, restless fingers.

Tell your talent what you will do to cue her for a take. Calmly point out the need to hold an expression for a few seconds following your cue to start. Take a slow, easy breath so that when she beings speaking it doesn’t result in a burst of over-modulated audio. Hold her focus and smile for a few seconds at the end while waiting for your signal that she can relax. These are perhaps the most important things you can point out as the director.

And they bear repeating. For years I’ve worked with talent ranging from a person who has never been interviewed or participated in a video production, to the aforementioned professionals who still freeze up in the studio. I’ve only just begun to realize that the above information has to be repeated during the takes, brought up during pre-production sessions and mentioned again at every opportunity.

Stick to the Routine 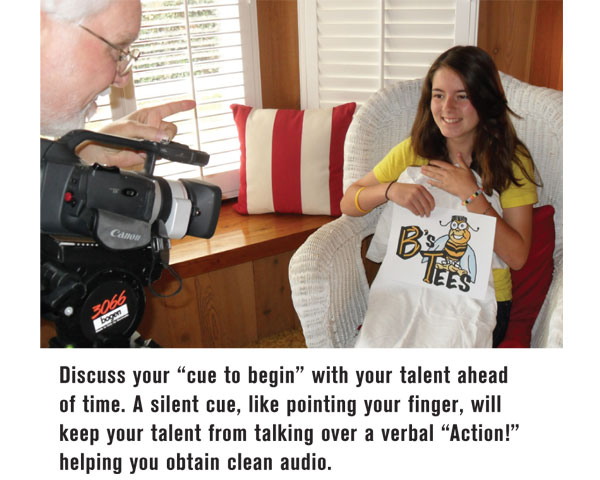 This relates to directing the shoot. Call it a support element to High Five Essentials for first time directors. When you develop your own routine for giving the count, for announcing that tape is rolling, for cueing the talent, for ending the take – stick with it. Nothing is more confusing than starting out with a 10-count, then changing to a 5-count, using vocals or fingers in the air, putting your thumbs up into the air to end a take then changing to an energetic “cut!” that makes everyone jump, entirely forgetting about holding that smile at the end of the take.

The following works for me and I always discuss these signals during pre-planning, pre-production and repeat them during the shoot. I advise the talent that I always say “rolling” when I start the camera recording.

I’ll repeat the explanation that I’ll do a verbal 5-count, going silent at three, then ticking off the last two with my hand, then when I bring my finger slowly down, pointing at them that is their cue to begin speaking “at will” – when they’re ready. I do this because I find telling them to start talking when they’re ready often prevents talent from jumping on my count, creating a bit of a startled-sound at the beginning of their lines.

I remind them at every opportunity to hold their smile and the need for that five-second clean in and clean out, then always signal the end of my take with both thumbs up in the air and a smile. You might prefer a different approach but keep it simple and consistent.

Plan your shoot. Determine how you will direct and stick with your signals. Be familiar with the script, shot sheet and intended purpose of the production. Schedule more time than you think you’ll need, often twice as much. If you do this you’ll have a successful directorial debut and say: “That’s a wrap!”

Earl Chessher is a veteran career journalist and independent professional video services provider in Southern California. He is the author of “They Shoot Funerals, Don’t They” a book on marketing and producing funeral and memorial video.