Interviews are the backbone of most non-fiction video presentations. Interviews are powerful message carriers that you can easily intercut with other production elements in a documentary, such as actuality sequences, re-enactments, graphics, animation and scripted narration.

Typically interviews use talking heads (to camera) and voiceovers (to pictures). Don't confuse voiceovers with narration. A v/o is the audio portion of an interview clip laid over supporting visuals in editing. Narration is scripted information sometimes voiced in the field to camera (stand-up), but it is usually recorded in the studio by a narrator or a participant reading from a narration script to the edited documentary. 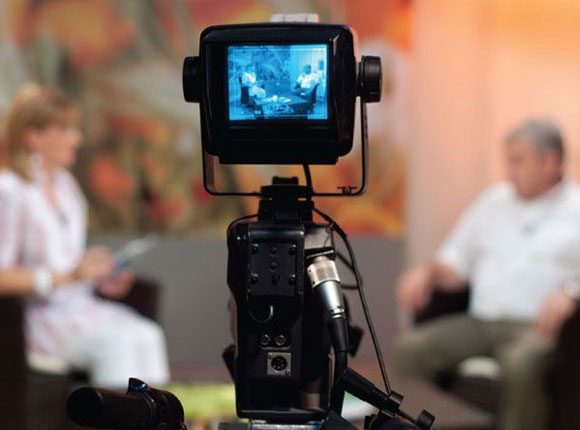 Talking heads are interviews with main and secondary characters in a fact-based story. Main characters are participants whose story you are telling and through whose eyes the audience experiences the world of the documentary.

Secondary characters represent the supporting cast. These participants provide additional information the audience needs to understand the story, such as background and historical information. You also interview secondary characters to support and sometimes challenge the themes and points of view presented in a documentary. Secondary characters can be subject matter experts, eye witnesses, official (government/institutional) spokespeople, vox populi (persons in the street) or associates and relatives of the main character.

Before you shoot an interview, consider the following:

So, where do you start?

Research is collecting information about the topic of your doc and about people who might end up in it as participants. Once you've mined internet and print sources and you've pre-interviewed people, you will have a better understanding of how to shape and focus your initial idea for the documentary – what to include and what to leave out. Focusing the documentary (what's the story?) will inform your strategy for each interview and its purpose in your doc. Research gives you more than facts and background information. Research will identify the two most important things a documentary needs: characters to populate it and actual situations they will allow you to film.

Research is also about knowing your participants. Pre-interviews are critical. Visit your main characters without a camera and get to know them – what they do and how they live. With secondary characters, such as subject matter experts, a phone or e-mail pre-interview will usually suffice.

Pre-interviews are not rehearsals for the real thing. In pre-interviews, you explain to potential participants what topic your documentary aims to explore. Ask subjects what knowledge and involvement they have with the topic. If you decide an interviewee would make an interesting character in your doc, schedule an on-camera interview. Don't feed subjects the questions ahead of time, but do tell them what you would like to talk to them about in front of the camera. This should make for a spontaneous and unrehearsed interview session.

Some of your interviews will be in-depth sit-down sessions, while others will be less formal.

Before launching into how to shoot an interview, be sure about the style of interview you have planned. First of all, will you include the interviewer's questions in the final presentation? If not, make sure interviewees know this, and prompt them to include the questions in the answers. Otherwise you'll end up with out-of-context and unusable one- or two-word answers like this:

Q: For how many years have you been managing this project?
A: Fifteen.

Don't set yourself up for "yes" or "no" answers. Ask people open-ended questions; have them tell you stories about what happened. If an answer is too general, ask for examples. Ask people to describe and explain things, events and feelings. "What was that like?"

There are many ways to do a documentary interview. Here are three:

An in-depth personal interview with a main character can carry an entire documentary, as the interviewer peels back layers of the subject's life and times. A good way to approach this kind of interview is to ask your questions chronologically: "And then what happened?" Interviews with secondary characters can be in-depth as well, but they tend to be factual, as the interviewee provides context and background: "Please give us a sense of what it was like politically at that time."

The key to in-depth interviews is to listen. Maintain eye contact with your subject, and don't look down at your notes and questions. Move the interview forward by responding to what your subject is talking about rather than waiting, poised to ask your next question. Have a conversation with the interviewee. Don't let opportunities to explore emotion slip away, and don't settle for generalizations. If a subject says, "That was the worst time of my life," you need to follow up with something like, "Tell me why," or "Please talk about that."

Interviewing a subject while they are doing something can be engaging for the audience and more relaxing for some interviewees than a formal sit-down. For example, in a factual interview, consider filming an athlete talking about the importance of pre-game warm-ups while she's doing her stretches, or, in a personal interview, have a single dad talk about his domestic challenges while he's preparing a meal for his kids. Then there's the literal walk-and-talk of a handheld interview where the cameraperson moves backwards trying to keep a uniform distance from the forward-moving subject.

Streeters or vox-pops – often known as man-on-the-street interviews in news shooting jargon – are where you park yourself with camera and microphone on a street corner, hoping somebody will stop and chat with you. These short informal interviews typically ask the same prepared questions of passersby to collect their opinions on a subject. Streeters make for short, snappy sound bites that can be cut into the doc to support (or contradict) its main themes.

The key to conducting a useful in-the-street interview is to put the subject at ease. Make it light, make it fun. Tell them what your doc is about, and ask if they would like to comment on the subject. Always give the last word to your interview subject: "Is there anything you'd like to add?"

Tip: Begin all interviews by having subjects introduce themselves on camera: full name, age and title or position, so you have that detail later for proper pronouncement during voiceovers and proper spelling for graphical IDs or even possible legal needs.

Sit-down interviews are conventionally conducted in the world of the subject. Interview people in their homes, their place of work or wherever they live their lives. Interview locations should say something about the character. Your technical instincts will be to seek out an interior location where you can control the sound. But you can shoot a perfectly good interview outside in an interesting and appropriate location by using a wireless microphone.

For static interviews, consider using a unidirectional shotgun mounted on a boom stand. Bring it in from the top or bottom (great solution when you're a one-person band). Frame the interview in a pleasing way and, depending on the tone of the interview, use lighting to achieve the appropriate mood.

Don't shoot an interview with the subject sitting against a wall. You want to set up your interview shot with depth in mind. Move your interview subject well away from any background element to achieve this. In shot design, the convention is to separate the main subject plane from the background plane. In a sit-down interview, you don't want to be behind the camera. You can't have a decent conversation with the interviewee looking through the viewfinder. Get somebody to shoot for you, or lock the camera off on a tripod.

If directing, verify the framing of the interview – eye-level is best for eye contact. Make sure the shooter gives you plenty of lead or nose room in the direction your subject is looking. For the best eye-line, park yourself as close as possible to one side or the other of the camera. This way both eyes of the subject make eye contact with the audience.

Mix up your interview positions, sometimes to the left and sometimes to the right of the camera. That way, in editing, your talking heads won't all be facing the same way. Plan your eyelines so that you can cut opposing characters' talking heads together as if they were facing off with each other. Work out a cue protocol with your camera operator as to when you want her to change shot sizes. It's best to reframe during a question.

Typically, do the beginning of an interview in a medium shot when the interview is about introductory subject matter. Include interesting hand gestures. A wider shot also allows you to super a title in editing. As the interview becomes more personal and as the audience comes to know the interviewee better, it makes sense to shoot closeups, even extreme closeups, for the intimate portions of the interview.

Your shot list should include the following (if you are using the interviewer on-camera):

You can shoot the walk-and-talk interview from a tripod, but I find handheld to be the best shot for a show-and-tell, where somebody is demonstrating an activity. With practice, you can develop a fluid handheld technique for following the subject during an active interview – knowing when to slide away from the face to what the hands are doing and smoothly back again. As long as your lens is zoomed out wide, you will bring back plenty of usable dynamic material.

When shooting handheld, the beginner's instinct is to try to capture everything, zooming in and out, hunting and pecking and playing the trombone with the zoom trigger. Usually this comes back from the field as uneditable material and makes editors tear their hair out.

Interviews are privileged access to people who have agreed to share a part of their lives with the documentary maker. Entire bodies of work have piled up around the ethics and the process of conducting and filming interviews. Seek these out in libraries, bookstores and online.

Oxford defines interview as "a meeting of people face to face, especially for consultation." Your job as interviewer and director is to ensure that your audience comes as close as possible to that face-to-face encounter.