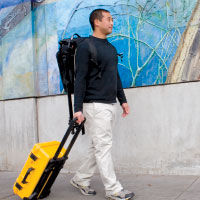 Being the lone-wolf producer is hard work, but in these economic times, it might be your best option. Here are a few Training Camp tips to getting it done, and staying sane.

We ended up with enough entry-level skills to step up to the plate and take an honest swing at whatever production task was required. Not that we hit everything out of the park. But whether asked to operate a Nagra on a commercial shoot, help light an interview on a corpora14238te video or log field tapes and transcripts for a documentary, we knew how to do it.

As an independent, self-equipped video producer, you don’t have to rely only on contract and crew work. You can generate your own projects: research the community’s communication needs, (training, marketing, education, government, industry, current affairs), and develop proposals (broadcast and non-broadcast), that communicate powerful messages on behalf of prospective clients and audiences. Smart equipment purchases will enable you to support your proposals with DVD samples that demonstrate your capacity to execute some of your production ideas.

Your bread-and-butter will come from non-fiction and non-broadcast informational /industrial production, but you should be developing projects for broadcasters as well. Actuality and fact-based programs are the most produced shows on television today. Audiences and broadcasters alike are looking for the next best idea in reality TV.

For quality results in post production, it is just as important to know the theory and practice of editing as it is to buy into the editing system that’s right for you. Again this means being educated. Take workshops.

How to Build a Video Budget