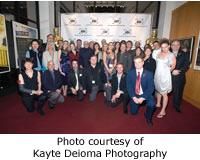 This year’s Academy Awards show had “star” appeal in the documentary category, when former Vice President Al Gore appeared on stage with Davis Guggenheim, director and producer of An Inconvenient Truth. Guggenheim’s movie garnered much press attention due to the fact that the subject of the movie was Al Gore, but the press attention is good news for all documentarians who struggle with getting their story told.

Make Way for the Little Guy

Documentary work involves long hours, garners little funding and is definitely not for the timid, but people go into this genre not for the glory, but for the story.

Videomaker was invited to a special reception honoring the documentary Oscar nominees. We spoke with several of the producers, directors, and cinematographers, many operating solo.

Iraq in Fragments by John Longley and John Sinno, follows a young Iraqi boy through his war-torn village. Longley combated not only social, political and war-related issues, he battled the desert’s sand and grit. He ended up duct-taping his camcorder to protect it.

Deliver Us From Evil, produced by Amy Berg and Frank Donner, divulges child molestation by Catholic priests. Remarkably, Berg, a former CNN producer, tracked down one abuser who spoke on camera about his victims.

The Best Short Documentary Award went to Ruby Yang and Thomas Lennon for The Blood of Yingzhou District, the story of HIV-positive residents of a small Chinese village and the innocent children whose parents have died of AIDS.

My Country, My Country looks at the rarely-photographed daily life of Iraqi families, especially the lives of Iraqi women. Producer Laura Poitras lived with the family she videotaped.

Two Hands, by Nathaniel Kahn and Susan Rose Behr, focuses on the struggle a pianist faces when he loses the use of his right hand, and the inspiring depth of his faith in finding a cure.

The IDA and Fair Use

The International Documentary Association sponsored this special reception for documentarians. The IDA is a non-profit association whose mission is to inform the public about the importance of documentaries. Among other things, they often help bridge the gap between sponsors and producers.

During the ceremony, an announcement was made about “Fair Use,” an issue many documentarians face over the need to use existing media. This year, The Fair Use Project will help guide docu-makers on copyright use, assist with insuring their films, and offer pro bono or affordable legal counsel when fair use issues are raised.

The producers we interviewed at this reception spoke with us about the gear they used, and some of the conditions they worked under. All of the documentarians shared a passion for their subject, and the desire to record their subjects in the most uncluttered and natural environment. It’s becoming easier with the smaller gear, and has unleashed a new explosion in the documentary world. Most of the producers used Mini DV cams to make these docs, but all of the producer-directors we talked to expressed great desire to purchase new HD camcorders.

Thomas Lennon credits the Internet with getting documentary attention that was unknown just a few years ago. “The Internet has changed the rules,” he said. James Longley said access was possible due to the smaller gear, adding, “It’s a great time to be a documentarian.”

You can read about the IDA at: www.documentary.org and the Statement of Best Practices in Fair Use here: www.centerforsocialmedia.org