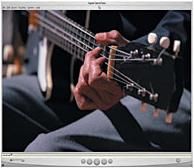 
artifacting The occurrence of unwanted visual distortions that appear in a video image, such as cross-color artifacts, jitter, blocking, bleeding, ghosts and mosquitoes. Artifacting is a common side effect of compression, especially at lower bit rates.


bandwidth A measure of the capacity of a user’s data line. Video looks best on a high-bandwidth connection, like DSL, cable modems or satellite modems. Conversely, downloading or streaming video on a low-bandwidth connection is not optimal, like on a dial-up modem.


compression An encoding process that reduces the data in a video frame, typically from nearly one megabyte to 300 kilobytes or less. This is accomplished by throwing away information the eye can’t see and/or redundant information that does not change. JPEG, Motion-JPEG, MPEG, DV, Indeo, Fractal and Wavelet are all compression codecs .


decompression The decoding of a compressed video data stream to allow playback.


DivX A recent codec based on the MPEG-4 standard for video, developed for the Internet.


download-and-play A way of viewing Web video that requires the user to download a video before playing it. Download-and-play files are often higher quality than streams.


encoding The actual process of compressing video for streaming or for downloading.


fps Abbreviation for Frames per Second. Same as Frame rate.


hypertext A word or phrase in an HTML document that is highlighted to enable users to navigate or jump to another Web page when they click on it. The word or phrase generally appears underlined or in a color on the user’s computer screen.


interlace To split a TV picture into two fields of odd and even lines. Under the interlaced method, every other line is scanned during the first pass, then the remaining lines are scanned in the second pass. All analog TV formats (NTSC, PAL and SECAM) use interlaced video.


keyframe A complete (possibly compressed) image used as a reference for subsequent images. To keep the data rate low, other frames only have data for the parts of the picture that change.


MPEG-4 A recent data compression format that can get better quality out of a given amount of bandwidth. MPEG-4 can compress a feature film onto a CD-ROM disc with approximately VHS quality.


QuickTime A format for video and audio data from Apple that can be created and played back on different computer platforms.


RealVideo A streaming technology developed by RealNetworks for transmitting live video over the Internet.


resolution In video, refers to the amount of discrete picture elements (pixels) that make up a video frame.


slideshow A series of still images on the Web delivered one-after-another, often with sound, either automatically or manually.


streaming Playing sound or video while the download is in progress. Sophisticated streaming methods can compensate for slower and faster connections as they vary over time due to traffic on the Internet.


transcode The conversion of analog video to a digital format, or vice-versa.


Variable Bit Rate (VBR) A way of encoding video such that the data rate varies over time. This allows more complex scenes to use a higher data rate, balanced by using lower data rates in easily compressed scenes.