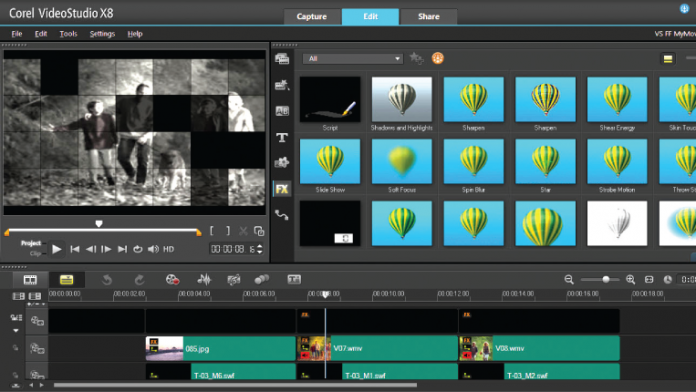 chromakey Method of electronically inserting an image from one video source into the image of another through areas designated as its "key color." It is frequently used on news programs to display weather graphics behind talent.

compositing Superimposing multiple layers of video or images. Each layer may move independently. Titles are a simple and common example of compositing.

crawl Text or graphics, usually special announcements that move across the screen horizontally, typically from right to left across the bottom of the screen.

cross-fade Simultaneous fade-in of one audio or video source as another fades out so that they overlap temporarily. Also called a dissolve.

cut Instantaneous change from one shot to another.

cutaway Shot of something other than principal action (but peripherally related), frequently used as transitional footage or to avoid a jump cut.

jump cut Unnatural, abrupt switch between shots identical in subject but slightly different in screen location, so the subject appears to jump from one screen location to another. Can be remedied with a cutaway or shot from a different angle.

montage A sequence of shots assembled in juxtaposition to each other to communicate a particular idea or mood. Often bridged with cross-fades and set to music.

mosaic Electronic special effect whereby individual pixels comprising an image are blown up into larger blocks in a kind of checkerboard effect.

nonlinear editing (NLE) Digital random access editing that uses a hard drive instead of tape to store video. Random access allows easy arrangement of scenes in any order. It also eliminates the need for rewinding.

posterization Electronic special effect transforming a normal video image into a collage of flattened single-colored areas, without graduations of color and brightness.

real time Occurring immediately, without delay for rendering. If a transition occurs in real time, there is no waiting; the computer creates the effect or transition on the fly, showing it immediately. Real-time previewing is different from real-time rendering.

render time The time it takes an editing computer to composite source elements and commands into a single video file so the sequence, including titles and transition effects, can play in full motion.

roll Text or graphics, usually credits, that move up or down the screen, typically from bottom to top.

rough cut Preliminary edit of footage in the approximate sequence, length and content of finished program.

safe title area The recommended area that will produce legible titles on most TV screens; 80 percent of the visible area, measured from the center.

sound bite Any short recorded audio segment for use in an edited program usually a highlight taken from an interview.

sound effects Contrived audio, usually prerecorded, incorporated with a video soundtrack to resemble a real occurrence. Blowing on a microphone, for example, might simulate wind to accompany hurricane images.

sweetening Post-production process of adding music and sound effects or otherwise enhancing the existing audio with filters and other effects.

timeline editing A computer-based method of editing, in which bars proportional to the length of a clip represent video and audio clips on a computer screen.

titling Process or result of incorporating on-screen text as credits, captions or any other alphanumeric communication to video.

wipe Transition from one shot to another, where a moving line or pattern reveals the new shot. In it's simplest form it simulates a window shade being drawn.