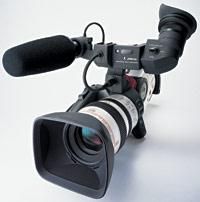 aperture/exposure A setting that manipulates the amount of light falling onto the camera’s CCD(s). This control adjusts the size of the camcorder’s iris.

f-stop Numbers corresponding to variable size of a camera’s iris opening, and thus the amount of light passing through the lens. The higher the number, the smaller the iris diameter, which means less light is able to enter the camcorder.

flying erase head Accessory video head mounted on spinning head drum, incorporated in many camcorders and VCRs to eliminate glitches and rainbow noise between scenes recorded or edited. By design, all 8mm-family and DV-family equipment has flying erase heads.

head Electromagnetic component within camcorders and VCRs that records, receives and erases video and audio signals on magnetic tape.

IEEE 1394 (FireWire, i.LINK) A high-speed serial interface developed by Apple and later adopted as a standard by the Institute of Electrical and Electronics Engineers. Notable for its ability to transfer data as quickly as 400 Mbps, giving it the ability to handle the large amounts of data required for digitized video.

lux A metric unit of illumination equal to the light of a candle falling on a surface of one square meter. One lux is equivalent to 0.0929 foot-candle.

phone plug Sturdy male connector compatible with audio accessories, particularly for insertion of microphone and headphone cables. Frequently referred to by their sizes, usually 1/4-inch and 1/8-inch. Not to be confused with phono plug.

phono plug (RCA) Shrouded male connector used for audio and video connections. Frequently referred to as RCA plugs, they only come in one size. Not to be confused with phone plugs.

progressive scan A method of displaying the horizontal video lines in computer displays and digital TV broadcasts. Each horizontal line is displayed in sequence (1, 2, 3, etc.), until the screen is filled; as opposed to interlaced (e.g. first fields of odd-numbered lines, then fields of even-numbered lines).

tally light Automatic indicators (usually red) on a camera’s front and within its viewfinder that signal recording in progress seen by both camera subject(s) and operator.

zoom Variance of focal length, bringing subject into and out of closeup range. Lens capability permits change between wide-angle and telephoto in one continuous move. "Zoom in" and "zoom out" are common terms.