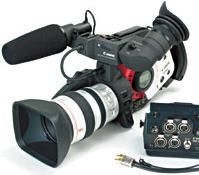 amplify To electronically magnify an audio signal for mixing, distribution, and/or transducing purposes.

audio mixer The piece of equipment used to gather, mix and amplify sounds from multiple microphones and then send the signal on to its destination.

balanced line Audio cables that have three wires: one for positive, one for negative and one for ground.

boom Any device for suspending a microphone above and in front of a performer.

capacitor The part of the condenser mike that stores electrical energy and permits the flow of alternating current.

cardioid A microphone that picks up sound in a heart-shaped pattern.

condenser mike A high-quality mike whose transducer consists of a diaphragm, backplate and capacitor.

decibel (dB) A unit of measurement of sound that compares the relative intensity of different sound sources.

diaphragm The vibrating element in a microphone that responds to the compressed air molecules of sound waves.

dynamic mike A rugged microphone whose transducer consists of a diaphragm connected to a moveable coil.

fishpole A small, lightweight arm to which a microphone is attached, hand held by an audio assistant outside of the picture frame.

giraffe A small boom that consists of a counterweighted arm supported by a tripod, usually on casters.

group master fader A volume control on an audio board that handles a subgroup of input channels before they are sent to the master fader.

handheld mike A microphone that a person holds to speak or sing into.

high impedance A characteristic of microphones that have a great deal of opposition to the flow of alternating current through them and therefore must have short cables; high-impedance mikes are less likely to be used in professional situations than low-impedance microphones.

impedance Opposition to the flow of an audio signal in a microphone and its cable.

input channel On an audio board, the control into which a microphone, tape recorder or other source is plugged.

lapel mike A small mike often clipped inside clothing or on a tie or lapel.

lavalier A small mike that can be worn around the neck on a cord.

master fader The audio volume control that is located after all the input channel controls and after the submaster controls.

noise Unwanted sound or static in an audio signal or unwanted electronic disturbance of snow in the video signal.

preamp An electronic device that magnifies the low signal output of microphones and other transducers before the signal is sent to a mixing board or to other amplifiers.

shotgun A highly-directional microphone used for picking up sounds from a distance.

three-to-one rule A microphone placement principle that states if two mikes must be side by side, there should be three times the distance between them than there is between the mikes and the people using them.

unbalanced line Audio cables that have two wires: one for positive and one for both negative and ground.

wireless mike A microphone with a self-contained, built-in miniature FM transmitter that can send the audio signal several hundred feet, thereby eliminating the need for cables running between the microphone and the recorder or amplifier.