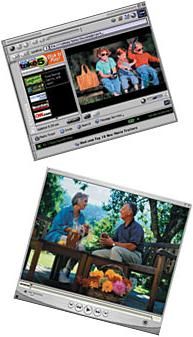 artifacting The occurrence of unwanted visual distortions that appear in a video image, such as cross-color artifacts, jitter, blocking, ghosts, etc. Artifacting is a common side effect of compression, especially at lower bit rates.

bandwidth A measure of the capacity of a user’s data line. Video looks its best on a high-bandwidth connection, like DSL, cable modems or satellite modems. Conversely, downloading or streaming video on a low-bandwidth connection like a dial-up modem is not optimal.

compression An encoding process that reduces the digital data in a video frame, typically from nearly one megabyte to 300 kilobytes or less. This is accomplished by throwing away information the eye can’t see and/or redundant information in areas of the video frame that do not change. JPEG, Motion-JPEG, MPEG, DV, Indeo, Fractal and Wavelet are all compression schemes.

decompression The decoding of a compressed video data stream to allow playback.

DivX 😉 A recent codec based on the MPEG-4 standard for video, developed on the Internet.

encoding The actual process of compressing video for streaming or for downloading.

FPS Abbreviation for frames per second. Same as frame rate.

interlace To split a TV picture into two fields of odd and even lines. Under the interlaced method, every other line is scanned during the first pass, then the remaining lines are scanned in the second pass. All analog TV formats (NTSC, PAL and SECAM) use interlaced video.

keyframe A complete image used as a reference for subsequent images. To keep the data rate low, other frames have data only for the parts of the picture that change.

MPEG (MPEG-1) A video compression standard set by the Motion Picture Experts Group. It involves changing only those elements of a video image that actually change from frame to frame and it leaves everything else in the image the same.

MPEG-4 A recent data compression format that can get better quality out of a given amount of bandwidth. MPEG-4 can compress a feature film onto a CD-ROM disc with VHS quality.

multicast Communication between a single sender and a select group of multiple receivers on a network, as in sending an e-mail message to a mailing list

QuickTime Computer system software that defines a format for video and audio data, so different applications can open and play synchronized sound and movie files.

RealVideo A streaming technology developed by RealNetworks for transmitting live video over the Internet. RealVideo uses a variety of data compression algorithms.

streaming Playing sound or video in real time as it downloads over the Internet as opposed to storing it in a local file first. Avoids the download delay.