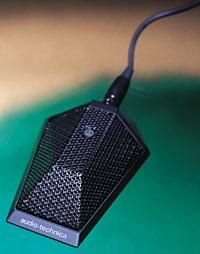 Natural background audio representative of a given recording environment. On-camera dialog might be primary sound; traffic noise and refrigerator hum would be ambient.

Extension arm used to suspend a microphone or camera over sound or subject(s) being recorded. Objective is to keep production gear out of camera’s view or to provide a unique angle from which to shoot video.

The most common type of unidirectional microphone. The pickup pattern resembles a three dimensional heart-shaped figure.

Transmitting a signal without wires, as in cordless mike, cordless mouse or wireless keyboard.

Measure of audio signal strength based on a logarithmic scale measured in volts. Also the unit of measure used for sound pressure level (loudness).

dynamic
Microphone type, also called "moving coil." Works much like a loudspeaker in reverse, employing a simple diaphragm, magnet and wire coil to convert sound waves into an electrical signal.

Number of vibrations produced by a signal or sound, expressed as cycles per second, or hertz (Hz).

Changing the characteristics of a sound wave. In audio frequency, modulation is known as phasing or flanging, amplitude modulation is referred to a tremolo.

Undesirable video or audio signal interference; typically seen as snow, and heard as hiss or hum.

Defines a microphone’s response to sounds arriving from various directions or angles. The cardioid mike, for example, has a heart-shaped pickup pattern.

Audio recorded with images. When the mouth moves, the words come out.

Highly selective microphone pickup pattern, rejects sound coming from behind while absorbing that from in front.

Narration accompanying the picture usually heard above background sound or music. Talking is typically applied to an edited visual during post-production.

Consisting of radio transmitter and receiver; it utilizes a low-power radio signal for cable-free operation.