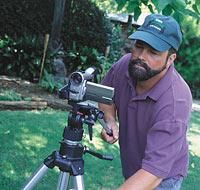 Action Axis
An imaginary line drawn between two subjects, or along a line of motion to maintain continuity of screen direction. Crossing it from one shot to the next will create an error in continuity. It is often referred to as the "180-degree rule."

Closeup (CU)
A tightly framed camera shot in which the principal subject is viewed at close range, appearing large and dominant on screen. Pulled back slightly is a "medium closeup" while zoomed in very close is an "extreme closeup (ECU).

Physical movement of the camera toward or away from a subject. The effect may seem to be the same as zooming, but dollying in or out results in a more dramatic change in perspective than using the zoom.

The opening picture of a program or scene. Usually, a wide and/or distant perspective that serves to orient the viewer to the overall setting and surroundings.

Controlling lens focus so that an image maintains sharpness and clarity despite camera and/or subject movement.

The act of composing a shot in the camcorder’s viewfinder for desired content, angle and field of view.

The space between the top of a subject’s head and a monitor’s upper screen edge. Too much headroom makes the subject look small, while too little crowds the subject on the screen.

Camera view of a subject or scene from a distance, showing a broad perspective.

Defines any camera perspective between long shot and closeup, viewing the subjects from a medium distance.

A view of the primary subject with the back of another person’s shoulder and head in the foreground. Often used in interview situations.

Horizontal camera pivot, right to left or left to right, from a stationary position.

Vertically raising or lowering the camcorder, approaching closer to either floor or ceiling, with camera levelness maintained.

Shifting focus between subjects in the background and foreground so the viewer’s attention moves from subject to subject as the focus shifts.

A cutaway shot to someone or something showing their facial response to the primary action or subject.

Composition theory based on dividing the screen into thirds vertically and horizontally and the placement of the main subject along those imaginary lines.

An extremely rapid camera movement from left to right or right to left, appearing as image blur. Two such pans in the same direction – one moving from, the other moving to, a stationary shot – edited together can effectively convey passage of time or change of location.

A vertical camera movement from a single axis as on a tripod.

A lateral camera movement traveling with a moving subject. The camcorder should maintain a regulated distance from the subject.