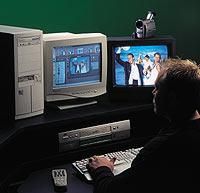 batch capture The ability of certain computer-based editing systems to automatically capture whole lists or "batches" of clips from source videotapes.
capture card A piece of computer hardware that captures digital video and audio to a hard drive, typically through a FireWire (IEEE 1394) port. A digitizer is a special kind of capture card which converts an analog video signal into a digital one before it captures it on the computer’s hard drive.

character generator A device that electronically builds text which can be combined with a video signal. The text is created with a keyboard and program that has a selection of font and backgrounds.

chromakey Method of electronically inserting the image from one video source into the image of another through areas designated as its "key color." It is frequently used on news programs to display weather graphics behind talent.

crawl Text or graphics – usually special announcements or credits – that move across screen horizontally, typically from bottom right to left. Produced with a character generator.

cross-fade Simultaneous fade-in of one audio source or lighting effect as another fades out; may overlap temporarily. Also called a dissolve.

cutaway Shot of other than principal action (but peripherally related), frequently used as transitional footage or to avoid a jump cut.

digitization The process of converting a continuous analog video or audio signal to digital data for the purpose of computer storage and manipulation.

dissolve Image transition effect of one picture gradually disappearing as another appears. Analogous to audio and lighting cross-fade. [See cross-fade.]

dub [1] Process or result of duplicating a videotape in its entirety. [2] Editing technique whereby new audio or video replaces portion(s) of existing recording.

edit decision list (EDL) Handwritten or computer-generated compilation of all edits (marked by their time code in points and out points) to be executed in a video production.

hard disk Common digital storage component in a computer. For video use, hard disks need to have: 1) an access time of less than 10 milliseconds; 2) a sustained throughput (data transfer rate) of 3 Megabytes per second; and 3) a maximum time for housekeeping of 33 milliseconds.

jump cut Unnatural, abrupt switch to/from shots identical in subject but slightly different in screen location. Awkward progression makes subject appear to jump from one screen location to another. It can be remedied with cutaway or shot from a different angle.

montage A sequence of shots assembled in juxtaposition to each other to communicate a particular idea or mood. The implied relationship between seemingly unrelated material communicates messages.

real time Occurring immediately, without delay for rendering. If a transition occurs in real time, there is no waiting, the computer creates the effect or transition on-the-fly, showing it on demand.

render The processing a computer undertakes when creating an applied effect, transition or composite.

safe title area The area that will produce legible titles on most TV screens; 80% of the screen, measured from the center.

synchronous sound Audio recorded with images so the words sync with the mouth.