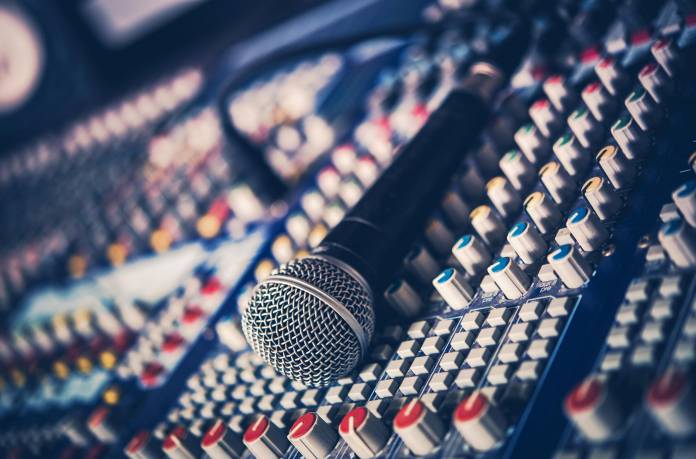 This is a list of all of the important audio terms you should know for recording audio for video and post-production work.

ambient sound – (ambiance) Natural background audio representative of a given recording environment. An on-camera dialog might be the primary sound; traffic noise and refrigerator hum would be ambient.

bidirectional – Microphone pickup pattern, rejects sound coming from the sides while absorbing that from in front and behind. [See also unidirectional, omnidirectional]

boom – Extension arm used to suspend a microphone over sound or subject(s) being recorded. The objective is to keep production gear out of the camera’s view.

digital audio – Sounds that have been converted to digital information.

dynamic – Microphone type, also called “moving coil.” Works much like a loudspeaker in reverse, employing a simple magnet and wire coil to convert sound waves into an electrical signal.

feedback – Echo effect at low levels, howl or piercing squeal at extremes, from an audio signal being fed back to itself.

mix – Combination of two or more sound sources into a signal output; the primary job of an audio mixer.

sweetening – Post-production process of adding music and sound effects to or otherwise enhancing, purifying or “massaging” a final audio track.

synchronous sound – Audio recorded in sync with images. When a person’s mouth moves, the words come out in perfect synchronization.

wow and flutter – Sound distortions consisting of a slow rise and fall of pitch, caused by speed variations in audio/video playback system.

We hope this list of audio terms helps you in your journey of understanding audio for video production.