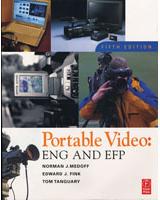 Portable Video: ENG and EFP, Fifth Edition remains the bible of pre-production, production and post production for out-of-studio single-camera shoots. Whether you’ve never picked up a camcorder or you’re a seasoned professional, this book should be in your library.

Don’t let these acronyms intimidate you – this soft-covered oversized book on electronic newsgathering (ENG) and electronic field production (EFP) covers everything you need to know, from script writing and storyboarding to what camera, mic and lights are best for your needs to tips and techniques in the edit bay. Budgeting and copyright issues are also included. This fifth edition is updated to include cutting-edge technologies such as solid-state HD Panasonic P2 acquisition systems and outputting for iPods and plasma televisions. Excellent black-and-white photos and graphics clearly illustrate rights and wrongs like few books in the bookstore. The question is not What is in this book? but What is left out? We couldn’t find anything missing for the single-camera, field shooter. Rating: 5

How Video Works: From Analog to High Definition (Second Edition) 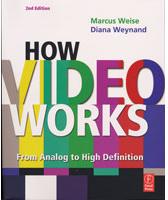 If you are one of those nerds who needs to know everything there is to know about how video works – like many of us here at Videomaker are – then How Video Works is a must-have.

Do you know the difference between 4:1:1 color and 4:2:2? Do you know how to read a graticule screen? Need to review exactly what GOP and RAID mean? Never knew how to read a histogram? It’s all here in one 300-page volume. Excellent black-and-white images plus 16 glossy color pages and a comprehensive glossary help with the sometimes-complicated explanations. The prolific educator and Emmy-nominated director/co-producer Diana Weynand teamed up with Marcus Weise to bring us everything video, from analog to HD. Free of fluff, this excellent reference book is understandable to the non-techie and an asset to the video veteran. It’s updated to include subjects such as compression for cell phones and handheld devices and Wi-Fi and WiMAX. Rating: 5

Television Disrupted: The Transition from Network to Networked TV

As the sub-title implies, Television Disrupted is about the transition from the 20th-century broadcast television to the 21st-century network of wired and wireless Internet Protocol “television.”

The intro suggests, “This is a book for media, entertainment and telecommunications professionals who are being forced to think about their businesses in new ways.” The book starts with terminology and concepts regarding all present forms of televised programming and the fascinating histories that brought them into existence. The author then covers emerging technologies and the business and sociology that surround the broadcast world today and concludes with a look toward the challenges of the future.

It’s an entertaining read that seems to lean toward the business and technology end of the industry just slightly. Palmer quotes many industry insiders from Willy Wonka to Bill Gates. He answers questions such as why the commercials are louder than the shows they sponsor and breaks down MP3 compression.

Not a stone is left unturned as Palmer quickly shifts from Nielsen ratings to podcasting, from open reel tape-to-tape to mobile phones and other handheld media devices. UHF, DRM, RSS, SMS, TCP/IP – it’s all in here. This book is a highly-recommended read for anyone even remotely associated with the distribution of video and/or audio. Rating: 5