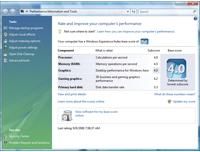 Getting Ready for Vista

Microsoft’s next operating system, Windows Vista, makes some grandiose promises to maximize the potential of systems that it is installed onto. However, a look at a build of Windows Vista Beta 2 reveals that the more streamlined your system, the better the experience you’ll have. (At press time, Microsoft had just released Release Candidate 1 of Windows Vista. The screen grab shown here reflects Windows Vista RC1.)

We installed the 64-bit version of the Vista Beta onto an Athlon 64 X2 3800+ based machine with 1GB of memory, and we enjoyed a very smooth experience. The user interface’s graphics are fluid in motion and beautiful to look at. For a beta operating system, we were impressed with its high overall stability. (RC1, which we updated to when it became available, is even more stable.)

One thing that we noticed is that the built-in defragmenter is very bare-bones-you get very little control over what goes on. Unfortunately, none of the third-party defragmenters we tried would allow themselves to be installed under Vista. However, this is the first version of a defragmenter for the Windows NT family of operating systems to include a built-in scheduler (set it for your bedtime and you’ll wake up to a faster machine), and the defragmenter can do more of its work in the background when the system is idle.

A very useful tool within Windows Vista is the Performance Rating feature (now referred to as the Windows Experience Index in RC1). This will show you specific problems that the operating system has detected over the course of day-to-day use and will make recommendations to help keep your system stable. The Performance Rating (er, Windows Experience Index) screen will also give your system a score based on the power of the system’s processor, quantity of RAM, hard drive capacity and video subsystem. From our experience with the feature, we can give you some insight about the system that you’ll need to have to get the most out of Vista.

Processor: Naturally, more is better. A Pentium 4 or Athlon 64 would be a very good starting point. If you have multiple processors, a 64-bit processor or a dual-core (or an Intel HyperThreaded) processor, rest assured that Vista will exploit your machine’s CPU capabilities to its very limits.

RAM: We’d recommend at least 1GB of RAM to get started with Vista. If your machine can address memory in a dual-channel or quad-channel configuration, take a look at its documentation when you install more memory to make sure that you’re installing the RAM in the correct sockets to maximize your system’s performance potential.

Hard Drive: A boot partition of at least 60GB would be a good idea. 120GB would be even better. While we didn’t get a chance to test Vista with any hard drives with a spindle speed faster than 7200 rpm, we would expect that money put toward a speedy drive would be well-spent.

Graphics: Vista is designed to work best in concert with a dedicated graphics processor (GPU). If you aren’t planning on working with resolutions higher than 1920×1080, 128MB of video memory should be plenty; but if you want to use multiple screens, spring for 256MB of video memory.
There are other qualifications for GPUs, too-one of the most significant is support for DirectX 9 Pixel Shader 2.0 in order to use Vista’s gorgeous Aero Glass interface. Most recent video cards can do this, but not all do. Check on the GPU manufacturer’s Web site for more details on your card’s GPU.

We also noticed that when we updated our video card’s drivers with one provided by the GPU manufacturer, our composite Performance Rating (with Vista Beta 2) went up by an entire point.

Windows Vista is slated to be available sometime in January 2007, barring any showstopping bugs. We’re curious to see the first crop of video editing systems that include Vista.