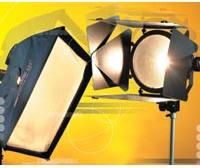 Ambient Light A light that doesn’t highlight any one subject for a natural room light effect. Usually a nondirectional light.

Black Wrap A black aluminum foil that is wrapped around lights to control spill. Can also be used to make small flags.

Broad A large open light generally used for fill or to light up a background.

C-47 Also called a number-1 wood clamp, this is your everyday wooden clothespin used to attach gels and scrims to barndoors.

Fill light Supplementary illumination, usually from a soft light positioned to the side of the subject, which lightens shadows created by the key light.

Flat lighting Illumination characterized by even, diffused light without shadows, highlights or contrast. This style may impede viewer’s sense of depth and dimension.

Highkey and Lowkey A highkey scene is one that is brightly lit throughout with very few shadows. A lowkey scene has lots of dark shadows and high contrast areas.

Incident light The light that emanates directly from a light source. Measured from the object it strikes to the source.

Kelvin Temperature scale used to define the color of a light source; abbreviated as “K.”

Kick The spill light a subject gets from the shine or reflection from a subject that is lit nearby.

Lux A metric unit of illumination equal to the light of a candle falling on a surface of one square meter. One lux equals 0.0929 foot-candle.

Obie An eyelight mounted on some part of the camera.

Quartz Tungsten-Halogen lights or lighting units. The name comes from the lamp’s enclosure.

Rim A backlight that is on the same level as the subject and more intense than the key light.

Scrim Lighting accessory made of wire mesh. Lessens intensity of light source without softening it.

Silk A flame-resistant fabric used to diffuse or reflect light.

Spill Light that spills beyond its desired surface area, or shines from the side of a lighting instrument.

Waste Unlike a spill, this light is deliberately set on a subject then slowly turned away so that part of the light will fall away from the subject.