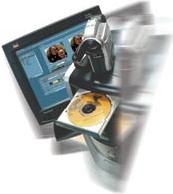 batch capture The ability of software to automatically capture selected clips recorded on a source tape based on a log of your shots.

breakout box (BoB) An A/V connector box that can be placed away from the computer. A BoB allows the editor to connect video and audio sources without needing to reach behind the computer.

crawl Text effect where text moves right-to-left (in the English-speaking world). Commonly seen as stock tickers or with Emergency Alert System activations on television programs. A crawl is usually seen at the top or bottom of a screen.

cut Instantaneous change from one shot to another shot.

dissolve Image transition effect of one picture gradually disappearing as another graually appears.

envelopes (also known as rubber bands) A software tool that allows fading in and out of audio or video in various part of a track. You can use animation nodes or handles on the envelope to fine tune the shape of a fade or effect control.

fade Gradual diminishing or heightening of visual or audio intensity. Usage: fade out, fade to black, fade in or up from black.

filter effect A small program or plug-in that changes a specific parameter of video or audio, such as the color of a visual element or the reverb on an audio track.

non-linear A somewhat archaic description of video editing systems that use hard drives for video storage. Non-linear systems allow random access of captured material, as opposed to linear systems using VCRs, that require fast-forwarding or rewinding tapes for each edit. Most modern editing systems are computer-based and non-linear, so the adjective isn’t all that important to specify.

plug-in A software addition to an editing or compositing program that adds features to the software. Typical plug-in functions include audio effects, encoding, titling, additional visual effects and videotape logging.

RAID (Redundant Array of Independent Disks) A method of configuring hard drives to increase data access speed, reliability or some combination of both. RAIDs for video are generally configured as RAID 0 stripe sets, which spreads the data for a particular file between both drives.

real time Occurring immediately, without any delays from rendering. If a transition occurs in real time, the computer creates the effect or transition on the fly, showing it immediately. Real-time previewing is different from real-time rendering.

rendering The processing required to draw an effect, transition or composite.

roll Text effect commonly seen in end credits, where text typically moves from the bottom to the top of the screen.

scene detection The ability of a video editing program to break captured video into clips automatically. Scene detection can be based on the time/date stamp data on DV tapes or based on optical changes in the scene itself.

scrub The ability of a non-linear editing program to play audio while the edit point (cursor or play head) moves along the timeline.

storyboard Editing software that utilizes thumbnails of video clips to illustrate scenes. Transitions are typically placed between scene thumbnails. Generally considered easy-to-use, since everything is drag-and-drop simple. Storyboard thumbnails are all the same size, regardless of the duration of the clip.

time code Discrete addresses given to each frame of video in Hi8, Digital8 and DV, as well as professional video formats. Time code makes frame-accurate editing possible and allows editors to identify scenes precisely in a log.

titling The ability to add text over a piece of video. Title programs integrated into edit systems, as well as title plug-ins, generally provide the ability to roll and crawl text.

transition Any visual changes between two discrete scenes. Cuts, dissolves, fades and wipes are the most common types of transitions. Most transitions in a video production should be cuts, but modern software has dozens of fun transition options.

turnkey system A computer system that is pre-configured to edit video or burn DVDs directly out of the box: just turn the key and edit. An increasing number of turnkey systems are capable of both video editing and DVD burning.

wipe Transition from one shot to another, where a moving line or pattern reveals the new shot.