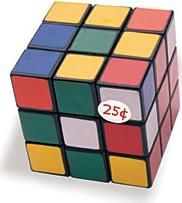 I hate to be the bearer of bad news, but it’s time we all faced the facts. Consider this article an intervention from the video fashion police. We’re living in a new millennium and it’s about time you got with the times. Truth is, some of the stuff you’re still putting in your videos is a little, well, out of style.


Remember the Rubik’s cube? From 1981 to 1985, "The Cube" was the hottest thing around; everyone had one. Today, the colorful cube is a 25-cent staple at garage sales everywhere. It has taken its place with the likes of other trendy, used-to-be-cool things like Atari game consoles, rabbit-ear antennas, "Baby On Board" signs, 8-track tapes, Member’s Only jackets, leg warmers and stand-alone video titlers.


Trends in video are as subject to changing with the times as clothes and hairdos. Think of this article as official notification that it’s time to lay a few of yesterday’s video trends to rest. And remember, I’m telling you this for your own good. It’s just not right for people to snicker behind your back.

Back when the first consumer stand-alone effects generators (SEGs) came out, star wipes, checker boards, spirals and clock wipes were pretty cool. Only a few people had the gear to make them, and page peels truly impressed viewers. About the time Bobby McFerrin made his mark with "Don’t Worry, Be Happy," the Video Toaster hit the streets. With it, NewTek introduced memorable transition effects featuring falling sheep, puzzle pieces and (who could forget) Kiki wipes. Today, tacky transition effects impress no one. Everyone has seen every one. Instead, stick to cuts and dissolves. These days, less is more.

Back in the mid-’80s, when everyone was wearing knit ties and parachute pants, funky filter effects were new and exciting. Every video on MTV had a strobed or posterized effect, and most stand-alone video processors let users create them at home. Soon, posterized shots and video strobes were popping up in everything from wedding videos to local TV commercials. Effects like these became clich before Michael Jackson’s hair caught fire, and they are a sure-fire way to make your new videos look dated. Do yourself a favor; opt for the more subtle and elegant slow motion, and use monochrome color effects like black and white.

Made popular in the mock cable access adventures of Wayne’s World, unnecessary zooms used to be everywhere, whipping in and out at high speed like the camera was mounted on a bungee. The only reputable show still using this irritating effect is The Tonight Show, where, night after night, the zany zoom-cam crashes in on an unsuspecting Kevin Eubanks just before Jay starts his monologue. Want your videos to look professional? Lay off the unnecessary zooms. They were out before Ellen DeGeneres.

If you’ve seen any commercials for car dealers or furniture stores, you’ve surely seen these. Usually keyed over video, a word like "Sale!" spins as it flies-in to momentarily fill the screen before flying back out, usually followed by another flying title, then another, then another. These flashy, in-your-face fliers were popular a decade or two ago, but today they just fly in the face of good taste. Keying titles over video is fine, just avoid spinning, flipping, flying, flopping fonts.

To keep your videos looking up to date, avoid using shots that linger on the screen too long. Quick cuts are the thing this year. When you watch TV, pay close attention to the screen time of the shots and count the cuts. Keep your shots short and sweet. These days you can’t just set a wide shot and walk away if you want to hold a viewer’s attention. Instead, look for a quantity of closeups and cutaways and shoot in a way that lends itself to lots of edits.