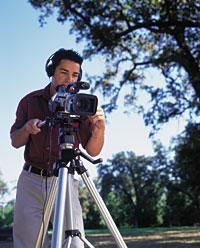 Great editing begins in the camera.

In his book The Seven Habits of Highly Effective People, Steven Covey observed that successful people "begin with the end in mind." The same can be said of effective video producers. The best way to insure a successful production is to shoot with the edit in mind. The following five tips will enable you to gather the footage you’ll need to edit with ease. Shooting with the mind of an editor is the first step to highly successful video productions.

Videotape is cheap; don’t be stingy when it comes to using it. Start recording five or 10 seconds before the action in your scene begins and let it roll another five or 10 seconds after the action has stopped. Rolling this little bit of extra tape can be a big lifesaver in the edit bay. This cushion will allow you the freedom of adding a transition effect or adjusting the timing of your edits in post production.

Editing is all about options. Record each scene you shoot at least two times. Three times is even better. Once you get the shot that you think is a "keeper," shoot the scene one more time as a safety. Multiple takes give the editor (who will likely be you) a choice. If the sound of a noisy truck or a bad piece of tape ruins ashot, the project won’t come to a screeching halt.

Provide even more options by shooting those multiple takes from a variety of focal settings and camera positions. To get maximum coverage, shoot the scene in extreme wide shot, medium wide shot and closeup. Shoot from eye level, from a low-angle camera position and from a high angle. You can decide which shot looks best when it’s time to edit.

When shooting sequences, overlap the action from shot to shot. If your scene calls for an actor to approach a door, open it and enter a building, shoot him entering the frame, approaching the door and walking through the door. Allow the door to close completely before cutting. Shoot the scene from inside the building the same way. Starting with the door completely closed, roll tape and wait several seconds before your star opens the door and steps inside. Again, allow the door to close completely before cutting. This overlap in the action will allow you to adjust your edit point. If you stop rolling tape too soon and you’ll limit your options.

Cutaways are shots related to a scene, but not part of the central action. They let you do just what their name implies "cut away" to something, typically to cover a bad edit. If an edit in your interview, for instance, leaves you with a jump cut where your subject’s head snaps from one side of the frame to the other a la Max Headroom, a two-second cutaway to the interviewer listening and nodding who is with intrest can cover the jump.
Cutaways also break up the monotony of the “talking head.” A quick cutaway to a Frisbee game or kids on swings can liven up a static interview about new park rules.