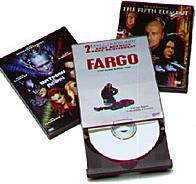 Who says you have to shoot video to edit video? In many instances it’s perfectly legal (and lots of fun) to borrow some clips from the pros who make movies and TV. Here are five tips for better borrowing.

First and foremost, always proceed with caution when using copyrighted material. Generally speaking, you can’t use someone else’s clips in a video that you plan to sell, broadcast or show to a public audience. But if a video is strictly for personal use (to entertain family and friends in your home), you’re free to chop up most anything you can lay your hands on.

Video editors can use clips from movies and TV for certain purposes outside the home under a clause called "fair use." Remember, we can’t give legal advice, so if there is a question, consult a legal advisor and seek proper permission if deemed necessary.

2. Record a show off the tube.


One of the easiest (if not the most obvious) places to find footage prime for borrowing is on your TV. All the borrower has to do is pop a VHS tape into a VCR and let ‘er roll.

Many TV sitcoms use generic shots of city streets and skylines as segment breaks. The Fox hit, Ally McBeal, is set in Boston and every episode includes scenic city shots. Borrowewrs can get great city shots from other location-based programs as well. Complete your library by taping a couple episodes of Beverly Hills 90210, NYPD Blue or Chicago Hope.

Television news is a great source for useful footage. In as little as half an hour, a video-borrower can collect dramatic shots of fires, floods, courtrooms, sports, celebrities and political figures for all kinds of home video applications.

I have a Trekkie friend who edited together clips from his collection of Star Trek episodes to compose his own original episode. Since the characters always wore the same clothes, it was quite believable — and very entertaining.


Take advantage of the million-dollar special effects in your favorite feature films. Whether you need a towering inferno, a giant monster, a shark attack or just a shot of the Eiffel tower, your local video store has it all for about two bucks a night.

While many movies that are available on VHS at your local video store are copy protected to prevent unlawful reproduction, you can usually capture clean footage straight to your nonlinear editor’s hard drive.


If you rent a DVD instead of a tape, you’ll get much better images. Rented VHS tapes tend to be full of grain and dropouts. DVDs will produce a crystal-clear image every time. Like most videotapes, copy-protected DVDs produce an unstable image if routed through a VCR. You’ll need to run the output of your DVD player straight to your nonlinear editor’s capture card to get
useable images.

Speaking of capture cards, if yours has a built-in tuner, you can capture TV broadcasts without ever going to tape. Bump the display up to 640 x 480 for a full-screen image and import clips from TV direct to your drive.