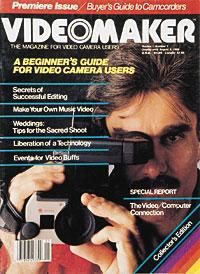 Fifteen years ago this month, Videomaker co-founders Matt and Patrice York watched their hopes and dreams come to fruition. That’s when the first issue of the magazine you now hold in your hands hit the newsstands. Videomaker Magazine was, and still is, dedicated to helping the amateur and entry-level professional video enthusiast develop and hone the skills of this exciting form of audio/visual communication.

In 1986, crafting home video by means of a camcorder was a fledgling endeavor. Consequently, the first generation of camcorders featured in that initial issue was a touch less sophisticated and stylish than today’s sleek, miniaturized models. "Boxy," "square" and "bulky" come to mind when you look at them now. And you can add "expensive" when you consider those 15-year-old pricetags. For example, the Minolta CR-1000S, a full-size VHS model, ran a cool $1,899. Today that same money could buy you two digital camcorders.

Though the layout and design of the magazine has changed considerably in the past 15 years the overall subject matter has remained consistent, vital and relevant.

A camcorder buyer’s guide featured in the first issue turned into a monthly component that continues to be a hit with today’s readers.

The inaugural issue contained an article entitled A Beginner’s Guide to Do-It-Yourself Television. The notion of making your own TV screen images, rather than relying on the consistent video stream fed to us by Hollywood, is still a continuing theme of the magazine in 2001. The first Videomaker also had an article entitled, The Video/PC Connection: Plugging In to the Possibilities, which discussed a number of exciting options for getting computer images onto videotape. That theme definitely blossomed, and has grown through the years. Today’s Videomaker is dedicated to addressing the special tools and techniques associated with making video on computers. The most advanced application covered in the premiere issue was the Amiga-based genlock/overlay device, which allowed users to overlay graphics and titles.

The advertisements in that first issue seem amusing to us now, with their quaint ’80s outlook. The ad featuring Lester Bogen, founder of Bogen Photo Corp., sitting atop one of his tripods always brings a smile. Though most of the advertisers found in our first issue are still with us, it’s also interesting to note the number of companies and products that didn’t make it. One such business was Showtime Video Ventures, a company that made a $500 A/B-roll special effects generator that required external time-base correctors to operate.

Along with the quaint ads and the boxy cameras, a seed of success was planted in that first issue. It glimmered with the promise of the many great things to come. Now, Videomaker presides over a full-service Web site, two expos per year, video workshops, a line of instructional videotapes, and of course, a monthly dose of good, solid advice on the craft of shooting and editing video.

May the next 15 years bring similar growth and success to Videomaker, and to all the makers of video who have benefited from this inspiring and informative publication.