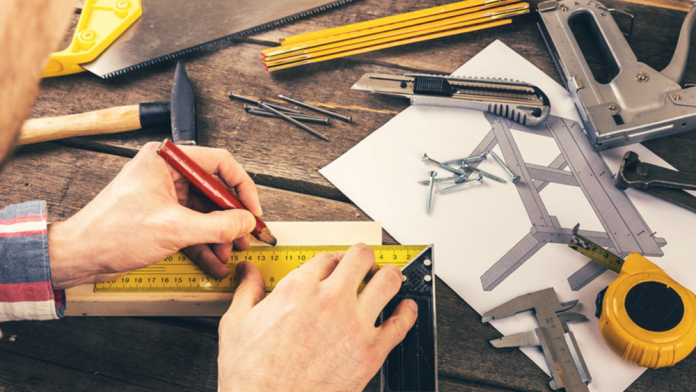 Key grips and their teams are basically the Tim Taylors of the movie making process. Grips have trucks full of wood and metal to construct whatever is needed to get the shot. Filmmakers are notorious for their DIY mentality, whether it’s auteurs like Robert Rodriguez, who relentlessly work to do everything themselves and make the best of a low budget situation, or forward-thinking minds like George Lucas and James Cameron, who had to invent new technologies and techniques to bring their imaginations to life.

Filmmaking is and always has been a hands-on do-it-yourself art form, but how far should you take it? For instance, is it better to build your own gear or buy professionally manufactured equipment? In order to understand what path is best for you, we will look at two DIY projects from our archives and compare them to the real deal.

First up is lighting. Lights are as necessary as a tripod — probably more so. Professional lights are expensive though. That’s why so many filmmakers built their first light kit from pieces they found at their local hardware store, this author included. Even thirteen-time Oscar nominated cinematographer, Roger Deakins, builds lights out of repurposed hardware. He regularly builds large custom light rings and walls from scratch. Obviously, he doesn’t only light with custom rigs; Deakins has every possible light at his disposal and usually price is not a problem.

Building a DIY light kit from the hardware store is actually pretty easy and effective. In our April 2016 issue, we talked about how to use super cheap clamp lights for a basic three light setup, but you can take these a lot further. We’ve used these many times on set along side professional light kits. They’re versatile, cheap and these days, with LED bulbs, you can get almost any color temp you want. Plus you can clamp them everywhere. For basic lighting situations these will work well.

It’s not all sunshine when using only clamp lights, however. There are a lot of possible issues. While these are a cheap and effective ways to control light, they’re not as easy to control as a and certainly can’t take daily abuse like an Arri or Mole Richardson. Plus, we can say from personal experience they are a pain to attach to a light stand. More importantly though, clamp lights don’t look professional. If you’re shooting for a paying client, busting out a bunch of homemade lights probably won’t cut it. The client won’t take you seriously and will judge your finished project through the lens of what they saw on set. Also big pluses when using professional lights are ease of use and speed. Professional lights set up quickly and are easily adjusted. They’re designed to set up and breakdown fast, and on the set, time is money.

If your budget allows for only a nice light kit or a nice lens, generally speaking, you should go for the lens.

If you’re shooting an independent film use what you can get your hands on. When you're first starting out buying lights are a huge investment. If your budget allows for only a nice light kit or a nice lens, generally speaking, you should go for the lens. However, it’s imperative that as you grow as a filmmaker, you invest in some quality professional lights.

The second DIY project is one that is super useful though many people don’t want to fit this into their budgets. A teleprompter is a wonderful and handy piece of equipment that can transform a shoot; it’s also something that cannot be easily substituted. Trust us, we’ve many times tried taping scripts to the side of the camera, under the camera, behind the camera way back, but you could always tell the subject wasn’t addressing the viewer. Teleprompters are, unfortunately, expensive. In our August 2014 issue, we told you how to build one yourself.  This is a pretty easy project that yields really good results. The basic premise of a teleprompter is simple and aside from the tablet, the parts are easy to come by and the build doesn’t take much work.

The great thing about this project is your clients don’t have a strong point of reference for what a teleprompter should look like, so if you build it well, they might not even notice it’s DIY. Keep in mind though, many of the same issues as with the DIY lights apply here as well. Your DIY teleprompter likely won’t have the durability and longevity of a professional one. Also, it might not be as easy to set up as the real deal.

That being said, this is a great example of a project you would probably want to try yourself before buying a professionally made one. For most of us a teleprompter is a crazy-useful tool that we’re happy to have.

When deciding whether to go the DIY route or buy the real deal, think about how much you’re going to use it and whether it matters if the gear doesn’t necessarily look as professional. There are hundreds of DIY projects on the Internet. I encourage you to explore and build something if for no other reason than to understand how the equipment works and to test that gear for a relatively low cost. For instance, DIY might be a great way to determine the length of a slider you need before you drop a lot of money on a professional one.

There are some pieces of equipment that at some point in your career DIY will no longer suffice. We have a hard time imagining anyone doing professional work without a decent tripod and at least a couple professional lights. Things like dollies, sliders and bounce cards you can get away with building yourself well into your career. It just depends on your budget and what you’re using it for. While shooting “Once Upon a Time in Mexico,” Robert Rodriguez would often use a small piece of aluminum foil under an actor's face to reflect light. The lesson here is to DIY to your heart's content — just make sure it’s adding to your production value and not costing you business.

The Quality of light

Have you ever heard anyone say, “This dinner is really good. What model oven did you use?” I haven’t either. Then why do people say, “Wow, great video. What camera did you use?”