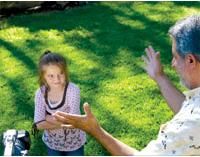 W. C. Fields warned us all of the perils of working with children and animals. Children add a unique and challenging element to any video production. They can be wonderfully imaginative, yet turn around and be stubborn and non-cooperative. In this column, we will look at some tips on directing children: things to avoid and ways to use their energy to pump up – not destroy – your shoot.

When directing kids, you must always go in with a plan. Not just a plan for the scene, but a plan for how to entertain the children while they are not working, deal with parents and make the whole shoot run smoothly.

When planning your shoot, make sure you break the scenes down into smaller chunks that will enable you to walk the child through easily. Make sure there is very little downtime between scenes, if at all possible, to prevent the child from getting bored. Find a way to make each scene slightly different and interesting, and, whatever you do, try to make things as easy as possible, so there are very few retakes. Children often do not respond well to having to do things over and over again. When they decide they don't want to do something again, it will be pretty hard or near impossible to change their minds. So – keep it simple. As the children get older, this is less of a problem, but, if you are working with kids from one to eight years old, you will have to try to get it right on the first few takes.

Casting is a key ingredient for success when using children. The first step in working with children is making sure you find the young person who is perfect for your scene. Make sure you have the children come in for a reading of the scene, and use their efforts as a guide. However, it is wise to cast based on looks, sound and attitude, rather than on how well they did their first reading. Their reading is important, but you also want to watch their ability to take direction, ignore the crew and camera and, of prime importance, work with you.

When casting, also take a look at the relationship the children have with their parents and how that relationship may affect your production. If at all possible, have the child come to the set with a guardian, friend or neighbor, instead of a parent. Kids tend to act up more when their parents are around and are less likely to bond with you and stay focused. Parents can also be a pain, in that they are constantly trying to "help" you by getting their child to perform in a certain way. We have all heard about "stage mothers" and their dominance over their children (see Case Study below). It is best to avoid this situation entirely by just having the parents stay away from the set when their child is performing. Always make sure the child is safe and cared for, and make sure any guardian or other responsible person remains with the child from the doorstep to the set and back.

Whatever you do, do not give your child actor the script to take home and learn without your guidance and direction. There are so many horror stories about children who take the script home and, under their parent's watchful eye, learn the script using the parent's direction and cues. On the set, the children know the script but will rebel against any new direction, because it is not the way they learned it with the parents, or they will recite the script like a poem learned in school.

When setting up for a scene with children, take the time to show them around the set. Explain what everything is, and answer their many questions. If the children are novices or have never looked into the viewfinder of a camera, let them take a look. Get them used to the setting, the crew and lights and build a bond with them. Keep the crew as small as possible to reduce distractions, and make sure there are no surprises that might startle or scare the children. Rehearse the scene, and make sure they are very comfortable with what is going on. It is very important to get down at their level. Sit on the floor with them and have fun. Kids respond well to people who "get" them and are willing to become part of their world. Have the children's costars join in the fun. It is very important that the people working on screen with the children also bond with them.

The best way to go is to keep the script very simple and make sure the children work with you on how to deliver their lines through rehearsal or games. Kids respond well to spontaneity, and you may be surprised how easy it is to ad lib or make a scene into a game, which you can then film without the children even realizing they are acting.

When shooting the scene, maintain the children's focus by keeping things fresh and exciting. If you have to do multiple takes, try to find new ways to present the scene, so that the children don't get bored and decide not to do it anymore. Keep in mind that children have a great imagination, and they may do something during a scene that you did not script or anticipate. Go with it. Children are the most natural and expressive actors you will ever work with. Give them a little space to work with, and you may be amazed at the performance you get on tape. Listen to them. Ask them questions. Get them really involved. They will love it if they think they are actually helping create the scene and making decisions on how to do things. When working with children, you have to be very adept at creating new scenes and building on the performances you are getting. As long as you don't stray from the main theme or idea of your script, your day will be very rewarding.

Here's a trick used to add playtime in rehearsal when teaching kids to hit their mark. Find several flat colorful discs that are about the size of a dinner plate that you can throw on a floor. If you have two or more kids, have several of these flat "Frisbees" in different colors, like red, yellow, blue, etc. Place the yellow disc with a bold number 1 on the spot where you want the first child to begin and the blue number 1 disc where you want child #2 to start his scene. Then, lay number 2 yellow disc where the first child goes next. Tell her to go to that spot, when it's time for her to move to the next location. She knows to follow the yellow discs, while her partner follows the blue discs. It becomes a game, but it also teaches them how to hit their marks.

Kids like rewards too! Reward a good take with something the children like, with the biggest reward coming at the end of the day's shooting. Talk with the parents beforehand to determine what types of rewards would be helpful. Candy, ice cream and other foods may work, but be sure they won't have unwanted effects, such as a sugar high that will make the children bounce off the walls and be less cooperative. You might consider taking a picture of the children with the main star in front of the camera as a simple photo reward for working on the shoot.

During downtime between shots, give the children something to do. It could be as simple as handing water bottles out to the crew or picking the marking tape off the set floor. If the children's costar has the time, have them play a game or go for a walk – anything to keep them active and their minds occupied.

Before the children leave for the day, thank them for doing a good job, and tell them what they will be doing the next day. Ask them if they had fun and if they have any questions. Tell them that you enjoyed working with them and can't wait for the next day's shoot. Send them home with a smile!

Children are very perceptive, so you must be honest and straight with them. If you have a tough time working with children or you come from the W. C. Fields school of film, you should probably find another director to shoot the kids' scenes.

One of the most frustrating yet ultimately rewarding shoots I have ever done was with a 6-month-old baby. I was shooting a commercial, and all I needed was for the baby to lie there cooing, giggling and looking left and right. The baby was absolutely beautiful. The parents and hangers-on were a pain in the … well, you know where. It took 45 minutes to get 20 seconds of useable footage. I spent the whole 45 minutes grimacing behind my camera as the parents yelled, screamed, baby-talked, shook rattles, made faces and generally acted like complete morons to get this baby to react. If the baby hadn't been a friend's child, I would have kicked everyone out, and the baby and I would have been able to finish in a third of the time.