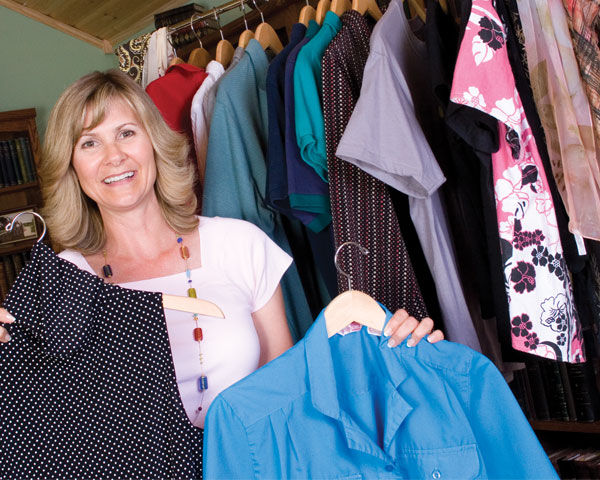 Scrutinize the wardrobes on TV and in the movies, and you’ll see most of the clothing worn by the actors will blend well with each other. This isn’t an accident.

So you are getting ready to shoot your big interview or scene, and your on-camera talent looks you straight in the eye and asks, “What do you want me to wear?” This is not a silly question. What your talent wears while on camera is very important, and there are some cardinal rules you should follow when establishing the wardrobe of the day. In this column, we will take a look at the do’s and don’ts of clothing, jewelry, hair and makeup for the camera.

Why Worry About It? 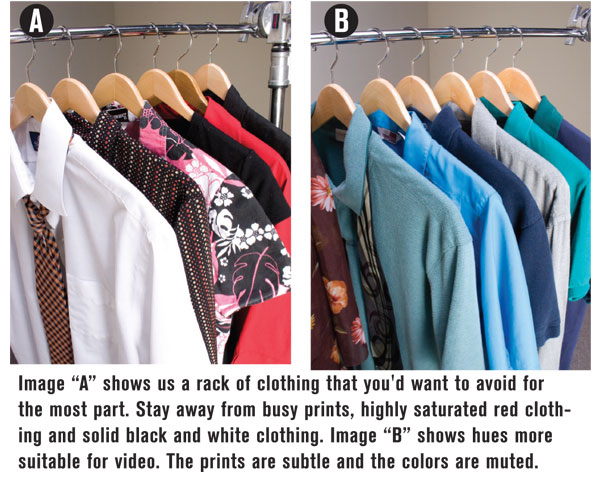 While today’s video technology is a lot more forgiving than the video of the past, you still need to be careful when making a wardrobe selection for your on-camera talent. There are four major areas of concern when dealing with clothing and other accessories: pattern, contrast, color and shape.

The clothing’s pattern can be a big problem. Close, high-contrast pin stripes, corduroy and herringbone all create a wavy rainbow-colored pattern called a moiré effect on television. The reason? As you probably know, standard American television has 525 horizontal scan lines. Horizontal scan lines have trouble displaying vertical lines in your video, and thus you get a moiré effect right in the middle of your talent’s shirt, jacket or tie.

High-contrast clothing is another major problem. Video cameras cannot handle high contrasts between bright and dark objects, and this includes skin tone and clothing. Dark-skinned people should avoid wearing white or very light colors. If they do, their shirts will glow when you set the camera to expose the face properly. Extremely light-skinned talent should avoid black or very dark clothing. A black shirt will become a formless hole in the video, because it will have to be very dark if you set the camera so that the skin tone is properly exposed.

While video does not handle high contrast very well, it has even more trouble handling some colors. Reds and oranges have a tendency to glow on camera. Yes, there are some television talent who insist on wearing red or orange on camera, but unless it is a deep, dark red, it probably glows in the television lights. Cameras have a hard time recreating the red and especially red/orange colors, and thus you should avoid them if possible. Additionally, many consumer camcorders tend to over-saturate the red channel to warm up skin tones, which can magnify the existing problem.

One of the major considerations when choosing an on-camera outfit is its shape and fit. Video does tend to make people look at least ten pounds heavier. Think about it. When you look at people, you see not only them but also the world around them, and that has a tendency to make them look smaller than they actually are. In the video monitor, you see only the talent. There is nothing else to make them look smaller, so they tend to look bigger. For this reason, it is very important that you make sure your talent is wearing something that will emphasize shape, emphasize a waist and give a taller look, not wider. Shapeless clothing will make the talent look bigger and lumpier on camera. 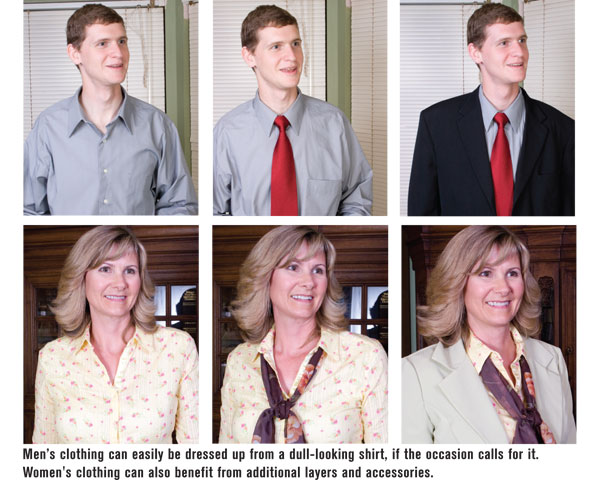 Always keep in mind that, if you are shooting a movie scene, the character will dictate the type of clothing the talent will wear. However, you still need to be careful how you dress your characters.

Now, walk to your costume closet and remove anything with close, high-contrast pin stripes, like white shirts with closely-placed black or navy stripes. Toss out any herringbone or corduroy and a lot of busy plaids. You can keep the white shirts, but only if they are going to be worn under a darker jacket. Anything orange or reddish-orange should be tossed in the burn pile. Blues, greens, grays and earth tones all work great for video.

For men, a shirt with some type of collar looks better than a t-shirt, unless of course the character would always wear t-shirts. Jackets also look very good, especially with good tailoring to emphasize the talent’s waist. The jacket can be a solid color or have a faint low-contrast pin stripe or pattern. A light blue, pink, cream or burgundy shirt will usually look a lot better under the jacket than a pure white shirt. If your talent is very fair-skinned, a light-colored jacket, such as a soft gray, would look best.

You will probably want to avoid vests because they are too constricting and look very formal. A tie is a great accessory, and here you can get away with red, although you should still avoid the reds that lean towards the orange side of the spectrum.

Always make sure that socks and shoes are appropriate for the character. Too often, we forget the small things that set our characters apart from the rest.

For women, avoid the same color and pattern problems as the men, but add to the list bright, huge, flowery patterns and your favorite red power suit (unless it is a very deep red). Avoid drab earth tones, because they have a tendency to blend into the background. You can spice up any outfit by adding a scarf. However, you still want to avoid reds, oranges and stripes.

Women will also want to avoid bow-tie blouses, unless they are trying to look like they are in uniform. Wear clothing that emphasizes the woman’s figure, to reduce the effect of the lens. If you want your talent to wear a short skirt, make sure she is comfortable in it and knows how to sit without constantly tugging to keep it down. Make sure her stockings, socks and shoes are appropriate to the character.

If you are shooting a professional interview, your talent should look the part. Match the outfit your talent is wearing with the subject matter. You wouldn’t want your talent to wear a suit and tie for interviews at a rodeo and you certainly wouldn’t want a t-shirt for an interview with the governor. If you are shooting a studio interview, your talent should be dressed in typical broadcast attire: shirts, ties and jackets for men; skirts, dresses or pantsuits for women. The talent’s shoes should be polished, socks should be long enough to cover the leg when crossed and colors should be muted to draw less attention. To make the jacket look better and keep it from riding up on the back, have your talent sit on the jacket’s tails.

Video needs light to make a good picture. Light reflects off shiny objects. Jewelry contains shiny objects. Therefore, you should be very careful about the type and amount of jewelry your talent wears during a shoot. Unless the character requires it, your talent should avoid wearing anything large and sparkling. This includes large rings, bracelets, dangling earrings, necklaces and pins. Simple and tasteful are two key words in video. Pearls and small neck chains with cameos or colored stones look best. Watches should be as non-reflective as possible. If possible, spray them with hairspray to cut the shine a bit.

While the character will most likely dictate the talent’s hair, always remember you are working with bright lights and always have to worry about flyaway hair and the weird (occasionally downright surreal) shadows cast by big hair. Both men and women should have nicely-styled hair, with shorter styles being more appropriate for professional interviews. Braid longer hair or tie it up in a ponytail to prevent the hair from flying in the talent’s face. You want to avoid wispy flyaway hair that will catch the backlight. As with jewelry, simple and tasteful are the key. 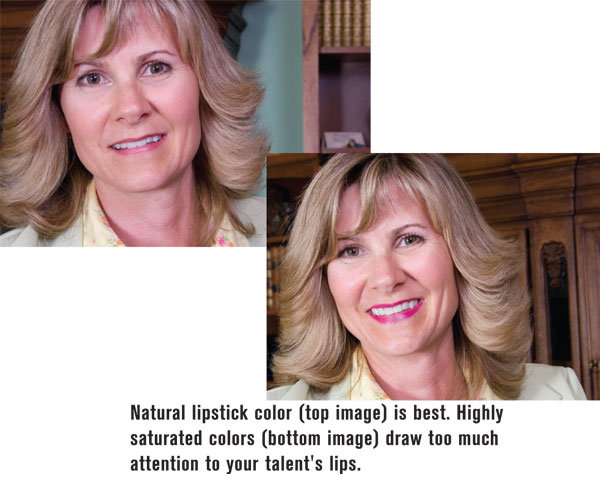 Gone are the days when both men and women had to wear heavy makeup to look alive on television. Today’s cameras are very sensitive and generally recreate color very well. Makeup is primarily a means by which the talent can even out skin tone and add a bit more color to the face.

Men can use a light base coat a shade darker than normal skin color, to even out skin tone and reduce the shine on cheeks, forehead and nose. A good shave before going on air will prevent or reduce the look of the five o’clock shadow. Any facial hair should be neatly trimmed – again, the character dictates this.

For women, normal street makeup is fine. Women do want to avoid dark reds and maroon-colored eye shadows, lip gloss and rouge, because the camera has a tendency to accentuate the blues in these colors, which will in turn become darker and be overly emphasized. Always make sure your talent wears makeup that is not only appropriate for the character, but also for their particular skin tone and natural coloring.

Always keep your talent’s character in mind when making clothing and accessory decisions. Use the guidelines above to make your talent look great and your video production look very professional. Have fun searching the closet!