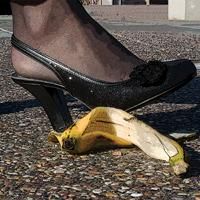 Physical comedy has been a hallmark of the film industry since the early days of the silent film.

Harold Lloyd, Charlie Chaplin and many other actors and comedians of the Silent Film era used their finely tuned sense of timing and physical agility to amaze the audience and bring laughter to the silver screen. This tradition was carried on into the television world through the pratfalls of Dick Van Dyke, John Ritter and Lucille Ball. In today’s media, physical comedy continues its reign as being one of the quickest and easiest ways to make the audience laugh. Easy for the audience yes, but not so easy for the actor or director. In this column, we will take a look at the pratfall from the director’s point of view. We will explain the art of directing the fall so that it looks real and tickles even the stodgiest theatre patron.

The Allure of Danger

Let’s face it. Human beings are very curious creatures, and we love being spectators to physical danger. Just ask the rubber-neckers as they slow down to see the wreck along the highway. Yes, we watch NASCAR to see who crosses the finish line first – but don’t we also look for the next fender bender, the next car in the wall? Physical comedy has that same sense of allure. Just watch any Jackie Chan movie. The audience is thrilled by his physical prowess and laughs as he falls from one precarious predicament to the next. His mix of martial arts, pratfalls and seemingly impossible physical feats gives his movies a great mix of comedy and drama.

We all know from the time we are kids that falling down hurts. Seeing someone trip and fall causes us to laugh – even when the actor in the situation isn’t trying to be funny. It is the unexpected, the “better them than me,” the chance to see someone else in danger or getting hurt that draws us. We can experience the danger of the fall vicariously, safe and sound in our cozy living room or the theatre.

What makes some falls funny and others dramatic and dangerous? Just seeing someone fall isn’t very funny. It is the unexpected fall and immediate recovery that is funny. Think about it. When we watch an actor trip and fall, we laugh as they regain their footing. If they never recover and are writhing in pain, it no longer feels funny and we become concerned for their safety. Just watch some of Jackie Chan’s outtakes during the final credit roll. The slick move and fall that made us laugh during the movie, becomes a scene of concern when we see him grimacing in pain from a twisted ankle or worse. Physical comedy is a physically demanding and dangerous process and it is up to the director and the actor to make sure that the very funny end product is done safely and executed in such a way that it catches the audience by surprise and makes them laugh out loud.

Danger and the possibility of getting hurt are aspects of the fall that the director has to avoid. An easy task? Well, it can be if the director and actor work very closely together and rehearse each move to make sure the actor isn’t physically hurt and the shot looks real. Physical agility, timing and camera angle are all important aspects to consider.

Physical agility and the ability to fall are of the utmost importance when doing any kind of physical comedy. To be funny, the fall has to be sudden and unexpected, and it is only complete if the actor recovers from the fall. To do this, the actors have to be able to trust the situation and literally throw themselves into the fall without hesitation and concern for their safety. The only way this can be achieved is if the move has been rehearsed and safety measures are in place. If the fall is a complete head-over-heels fall and recovery, thick matting placed below the camera shot as well as a costume that hides dense padding added to knees, elbows and other body parts can help reduce the impact of the fall. The actor must also know how to fall.

When you fall, it is the sudden impact and taking the weight of your body on one point that causes that point to break and hurt. The sudden impact can be reduced or even eliminated by rolling out of the fall and never letting your body come to a complete stop until the power of the fall is reduced. By staying in motion, you can slow the momentum of the fall until you get to a point where you can safely stop the motion without putting too much pressure on any one body part. Another way to reduce the impact of the fall is to spread out the contact area. If the actor makes sure that his body and extremities all hit at the same time, the power of the fall will be spread over a larger area and be greatly reduced. This method is used in Judo and other martial arts. In Judo, you spend a great deal of time learning how to fall, learning how to take the impact along the entire length of your body to spread it out and also learning how to quickly recover from the fall. In a Judo fall, the body is extended and the impact of the fall is taken along the side of the body with the head tucked in to avoid impact with the floor and the bottom foot extended. The idea is to avoid hitting the ground on one point of the body.

When directing the fall, you want to make sure that it looks as real as possible. You also want to make sure it is well timed. To do this, you have to set the fall up. The set-up is nothing more than having the actor walk very naturally towards the camera looking very self-assured, enjoying the day – not a care in the world. Suddenly the actor trips and falls just below camera shot and immediately jumps up, look around to see if anyone saw the blunder and recovers as if nothing happened. Sandra Bullock in Miss Congeniality is a great example of this. She comes out of the building where they just spent hours trying to make her look like a beauty queen, and begins to walk towards the camera. Suddenly she falls off her high heels, goes down below camera shot so you never really see her land and pops back up smoothing the hair out of her face. The result is very funny. It works because of the set-up: she is looking gorgeous and together. The fall: it is very sudden and unexpected. The recovery: she reacts as if nothing happened, swipes at the hair on her face and keeps going.

By placing the camera shot in such a way that the actor falls below the shot, you can hide any protection matting needed. You set the scene up by showing the actor in a long shot so we see the feet. The actor naturally walks into the camera with the bottom of the shot rising above the body. The shot is even funnier when the actor suddenly disappears from the screen and then reappears – all disheveled and acting like nothing even happened.

If the fall is more of a head-over-heels fall, you definitely want to put down matting. In this type of fall, you must rehearse with the actor the placement of the fall and make sure you have a shot that allows recovery off the mat without its being seen. The mats should be solid enough that the actor can spring back up. Remember, the recovery is more important than the actual fall. Set up the shot so that the audience thinks they are seeing the ground where the actor is walking, and then the trip, fall and recovery, and perhaps a cut to another shot that shows a perfectly clean sidewalk or street and then cut to a puzzled look on the actor’s face.

In the whole sequence, the fall is set up by a long shot that lasts for a little bit, then the fall. If there is an audience, perhaps a quick cutaway to their faces with a look of shock, then a quick cut back as the actor recovers, a tighter shot of the face and then a longer shot as the actor moves on as if nothing happened. The setup is slow and peaceful, followed by a flurry of shots, and then it is finished by a slow and peaceful shot after the actor’s recovery.

It is the suddenness of the move and the quick recovery and attempt to hide the embarrassment that makes the fall funny. Timing is everything. Work with the actor and make sure the fall is safe, precise and effective.

Pratfalls are not the only kind of fall that can be fun to shoot. You can safely and quite effectively shoot falls off rooftops and balconies with a little planning and good shot choice. If you have an actor that is rather agile and knows how to fall, set up the scene on a low balcony that looks the same as the balconies twenty stories up. The first shot you need is on the balcony, as you show the actor from the side being pushed, thrown or jumping off the balcony. Then cut to a shot from outside the balcony as the actor flies past the front of the camera and lands on a very padded area. Next, have your crew haul a life-size dummy with the same clothes and hair up to the twentieth floor. While you shoot from the ground floor, have the crew simulate the action and throw the dummy over the railing. Follow it for a few seconds with the camera.