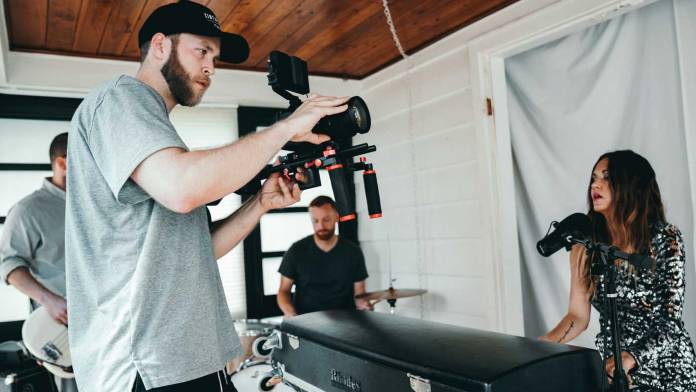 When is a director not only the director? Well, in today’s fast-paced, small crew production world, the answer to that question is; often. The director must be able to pick up the reins for various positions and still maintain the quality and integrity of the production. In this column we will look at two common examples of dual-role directing and note the benefits and challenges of each.

The director as camera operator is a common occurrence, especially in a 2-person crew video production. This dual-role can be detrimental to the production for a number of reasons. When acting as the camera operator, you are concentrating on looking through the viewfinder and keeping the action in focus and well-composed. As the director, it is hard to pay attention to the performance of the talent. It will also be difficult for you to monitor the other aspects of production and possible distractions. Because of these problems, you should only choose to jump into the role of camera operator after careful consideration of the production needs.

Sometimes you will have to step behind the viewfinder because of the requirements of the scene. If the scene requires carefully choreographed movement of the talent and the camera, and you don’t have a monitor to watch as the camera operator shoots the scene, it is time to step to the viewfinder. Rehearse the scene a number of times, alternating your close attention between the performance and the choreographed movement. When you shoot the scene, have your partner carefully watch the performance as you concentrate on making sure what is recorded in the camera is framed perfectly and all movement smooth and steady. Play each take back to double check the performance and work with the talent to tweak any performance shortfalls. While this process is slow, it is the easiest and most productive way to get your vision of the scene on tape.

Sometimes you will find as a director, that your talent can more easily direct their attention to the camera if you are behind it

Sometimes you will find as a director, that your talent can more easily direct their attention to the camera if you are behind it. When shooting documentaries, if there is little camera movement needed, you will find it a lot easier if you ask the questions from a position beside the camera while actually doing the shooting. The subjects will be more comfortable talking to you than the camera operator. It also helps avoid the problem of the subjects glancing towards you as they answer their questions instead of looking at camera or an empty space to the side of the camera.

Another situation when you may have to step in to act as both director and shooter is perhaps the most common reason: you are the best shooter between the two of you. If you need an intricate camera move and know what the final shot should look like, go for it. Directors like James Cameron often pick up the camera during the shooting of their films because they know exactly what a move or shot should look like and they know they have the best chance of achieving that shot by shooting it themselves. Be careful that you have your partner monitor the talent’s performance because you will have to pay close attention to getting the shot.

Maintaining good audio, while very important, is a lot easier for a director to do if they want to concentrate on the performance of their talent. To enable you to be both director and sound recordist, you must set up your audio so that the microphone(s) run through a mixer and then plug into a camera. It is next to impossible to maintain good audio levels if the microphone is connected directly to the camera. By riding gain with a mixer, you can maintain good levels. Ideally, you would have the output of the mixer go into a DAT machine or flash recorder. Audio equipment inherently has the ability to record a broader range of sound from very loud to very soft. The quality of the dual system will greatly enhance your production. This dual system works well if you also use the microphone on the camera to record a reference audio track. Later when you edit, you can easily match the waveform of the reference audio track to the waveform of the audio that you recorded separately.

Watching the record levels takes much less concentration than running a camera, thus allowing you the luxury of focusing on your talent. By acting as both the director and audio recordist, you can concentrate on the talent’s actions, voice, and the subtle nuances of their performance.

To give you peace of mind, you may want to set up a cart with a mixer, video monitor and DAT or flash recorder. This will give you a portable station from which you can monitor the camera and audio yet concentrate on the subtleties of the talent’s vocal and physical performance.

If you have to plug your microphone directly into the camera, make sure you set your audio levels so that the loudest part of the performance does not peak and cause the audio to buzz. Then use a fishpole and shotgun microphone in a suspension mount to capture the best audio during the performance. If you are the director/boom operator, you will easily be able to focus on the performance of your talent because you will be right there. Make sure you watch replays of your scenes to catch any camera problems.

Even though you may find yourself playing dual-roles, you must always remember that directing is your main priority. Make sure your talent understands that while you are performing two functions, their performance is the primary focus of your attention. Work with the talent to make sure they are comfortable with you in your dual-role and that they don’t feel neglected. Give them constructive feedback so that they can improve their performance and help you create a professional, high-quality production.

In your role as director/sound recordist, make sure you discuss all of the camera moves and expectations with your camera operator. Rehearse the shots and discuss any problems with focus, framing or movement. Show them that you trust their abilities, and make a point to ask for their feedback when discussing each take on your rundown.

Playing a dual-role can be an exercise in mental gymnastics. However, if you build a rapport with your talent and a good relationship with your partner, you will be rewarded with a great experience and a quality production.

Headphones are the director’s best friend. Never go on a shoot without a good set of headphones. The best kinds are those that completely cover the ear and cut out all outside noise. With headphones, you will be able to maintain close attention to the talent’s words, inflections, tone and overall performance. You will also be able to pick up every plane, car and squeaky chair within the range of the microphone. It is amazing what you hear while on the set. It is also amazing what you miss if you don’t have a good headset. Later when you get into the editing suite and listen to the audio through your good studio monitors, you’ll be kicking yourself because the scene that you thought was perfect has the buzz of an airplane rolling from the right to left speaker. It’s better to catch it on the set than try to fix it later in post.

Even when you are acting as both the director and camera operator, it is important to have a good headset. If you are using a dual system, plug your headset into the tape out or headset connector (use a splitter so that both you and your recordist can listen in) of the DAT or flash recorder. Do not monitor from the mixer. All that will tell you is that you are getting sound to the mixer. Always monitor from the audio recording device or if you are recording into the camera from the mixer, plug your headset into the camera. This will tell you that you are getting audio to the recorder or camera. If using a dual system, check to make sure you are recording a good audio signal but plug your headphones into the audio recorder. You are monitoring the audio to make sure it is good. By plugging into the camera, you are only monitoring the performance, not the true recording of that performance.