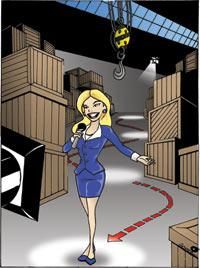 ESTABLISHING SHOT: Wide angle on Narrator entering through a door at the back of a long warehouse aisle created by 20-foot-high stock racks on both sides. She walks up the aisle toward the camera, speaking as she moves, stopping to complete her opening lines in medium shot.


That’s the first shot of your training video on warehouse operations, as shown in Figure 1. The subject moves throughout the shot, the sodium vapor work lights are useless for movie lighting, the warehouse is very, very large, and your lighting kit has just eight spotlights and three fill lights. Can you light a moving subject in a big location?


No sweat, as long as you remember two prime rules of lighting: don’t light the entire environment, only what the camera will see; and, don’t fully light the subject’s entire path, but only the points at which she stops (in this case, in the foreground medium shot).


To light this (or almost any shot) it usually helps to work in this order:


1. Light the subject at the important action area(s).


2. Place additional key lights that pick up the subject at other points during the move.


4. Light the remaining parts of the background that will show on in the frame. And throughout this process, try to use lights for multiple purposes. For example, we’ll see how the key, fill and background lights also help pull out details of the background.

The narrator will give most of her speech close to the camera, in medium shot, so that’s where you light her fully (Figure 2). This is a good place for a classic three-light setup. First position a spot (probably with some diffusion) maybe 15-20 degrees to one side and about 15 degrees higher than eye level.


Then add a soft fill on the other side, just above eye level. As you watch the reference monitor (you do have one, don’t you?) move the flood in and out until the subject’s face is darker on the fill side, but still fully lit.


Finally, place a spot high up and to the rear, to accent the subject’s head and shoulders and to separate her from the background. Here and elsewhere, the warehouse storage racks make ideal lighting platforms.


When this setup is complete, place a piece of tape on the floor. By stopping on this mark, the subject will be properly lit for her speech.

So far, you have a subject emerging into her lighting setup from dead black. To light her as she walks up the aisle, let’s add three spotlights, all placed on the same side and masked from the camera by cartons strategically placed on the shelves (Figure 3).


As you can see from the light path diagrams, the narrator will walk from black to bright to black again, so let’s counteract this effect by filling from the other side (Figure 4). A single large-source flood light is positioned to do the job. It’s probably better to use a relatively small "broad" or "scoop," rather than a big umbrella or fluorescent pan because smaller floodlights have longer throws.


Notice that Figure 4 includes the fill light set up for the subject. This is a perfect example of a light doing multiple duty. As you study its light path, you’ll see that it provides fill behind the main performing area as well as on it, and it splashes on the shelving opposite. As we continue to add lights, we’ll notice that many of them have more than one purpose.

By the time the fill light hits the back wall it’ll be pretty feeble, so we need to add a second fill light to fully illuminate the background (Figure 5). (Notice that this background light will also act as a soft key light for the narrator as she is entering the warehouse.)


But there’s something still missing. All of our key and fill lights don’t do much for the warehouse floor. To fix this, we add a spotlight placed high and outside the warehouse door. When the narrator comes through, this high backlight will splash along the floor. Notice that the pattern from this light does not light the whole length of the aisle floor. But remember: the bottom of the frame will cut off the foreground floor, so it doesn’t matter that’s it’s too dark.


The high backlight also does three extra jobs. It provides a dramatic rectangle of light as the narrator opens the door and stands silhouetted within it. It functions as a rim light, highlighting her head and shoulders. Finally, it splashes along the right side shelf units, helping to illuminate them.

Figure 6 looks complicated but it’s worth careful study because it shows all the lights working together. For example, notice that the front-left shelving is also lit by the main key light. The narrator enters into a modified three-light setup (position 1): keyed by the background flood, back-lit by the high light behind her, and filled by the main flood on the right side.


Note also that in every position except number 5, she is lit by at least two lights. The positions, intensities and light qualities of these transient lighting combinations vary from one to the next, adding interest to the visuals as she walks up to her mark and stops.


Fine-tuning your design means balancing the intensities of various lights. Your first task will be to adjust the three key lights raking across the subject as she walks forward. Flood them out and/or add diffusion until they no longer make unrealistic hot spots as she walks through them.


The trickiest part of fine-tuning this lighting design involves balancing light intensities so that the warehouse doesn’t seem to be in one light while the narrator standing on her mark is in a different one. To do this, either raise the bridge or lower the river. If you have as many lights (and as much power) as a Hollywood production, your strategy may be to optimize lighting for the foreground and then beef up all the other lights until the background is almost as bright.


But if you’re working with limited equipment, you may prefer to get the background and aisle as well-lit as possible, and then move the foreground units away from the subject to drop foreground intensity until foreground and background light levels match.


As you do this, watch your monitor carefully, to avoid local black holes or supernovas in the image. As always, control light intensity by focusing the lamp (where possible), adding diffusion, moving the whole light forward or back, or any combination of these fixes. Never forget the simple rule of lighting design: if it looks good, it is good.


Though we’ve focused on a single lighting problem, this basic approach will work in most situations. Fully light important action areas, partially light areas between, light the background that will appear in the image, and balance all the lights so that the fully-lit areas are just a skosh brighter than the rest of the image.

Outdoors, in daylight, you’ll light with reflectors rather than lights, but the principles are identical. Here are three helpful tips.

1) Use aluminum reflectors. Their long throws enable you to keep them out of the frame during wide shots.


2) Don’t worry about lighting interim subject positions and background. Outdoors, ambient light will do much of the job for you.


3) Beware of excessive fill. Too much reflector light on the shadow side of a face looks artificial and hokey.

[Sidebar: Two Shots Better Than One?]

You may want to stage your action so that you can cut to a closer angle, once your subject has reached his or her mark. That way, you can reposition lights, silks, screens, or reflectors that would be visible in the wider shot.