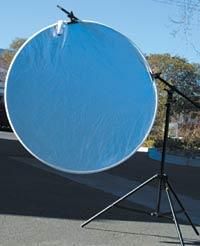 First, lets take a quick taxonomy of reflector species. Reflectors are either rigid or flexible. Rigid reflectors may be faced (in order, from brightest to softest) with shiny aluminum, matte aluminum, wrinkled aluminum or white paper. Paper-faced reflectors are usually foamcore: rigid Styrofoam sandwiched between paper surfaces and available at any art or craft store. (Tip: pay the modest premium for one-inch-thick boards. They far outlast thinner ones.)

Flexible reflectors are usually cloth spread across thin metal hoops that can be folded for storage. Fabrics may be metallic for greater reflectivity or plain for a soft, diffuse effect. They come in white or sometimes gold, for reasons detailed in the sidebar.

Which to choose? Flexible reflectors are light and easily stored, but they’re unstable in any breeze, making their light waver visibly on-screen. Hard reflectors are cheap to buy (or easy to make for almost nothing) but they’re bulky and rigid, making them difficult to transport and store away.

Since these critters are most often used in wide open spaces, let’s see how to employ reflectors outdoors as key, fill, rim or background lights. (NOTE: For simplicity, we’ll describe everything via a clock face metaphor, with the subject at the center and the camcorder at six o’clock.)

Start by placing your subject with the sun behind them (between ten and two o’clock). Then use a white reflector placed between four and eight o’clock, close to the subject and just below eye level, to fill in nose and chin shadows . If you want to get fancy, use a reflector on either side, with the key unit closer, so the subject is lighter on that side.

A reflector key light also works well when the subject is in the shade. Bounce the light in, moving the reflector in or out until it is two to three times as bright as the ambient shade light that is ultimately creating the fill.

Every type of reflector can and should be used for fill. For closeups, a diffuse white card looks most natural, but its intensity is too low for the throws required in longer shots. If you’re short-handed, have subjects aim a white card, held below the frame line, up at themselves for their closeups. It often works great.

Using aluminum reflectors for key or fill light requires care, because they throw a hard, narrow beam and they can make subjects squint unattractively. Make sure you place them far enough away to reduce their intensity.

Rim lighting works best when a second reflector is delivering fill light, as described in the previous section. If the sun is close enough to six o’clock and low enough in the sky, fill light may be unnecessary, but the golden glow of rim light might look wonderful.

When the subject is in shade, rim lighting doesn’t work, unless the protected spot is just outside a sunny area. A hard aluminum unit in the sun can often bounce light off a second hard unit in the shade and back onto the subject’s hair and shoulders. That’s what bright aluminum reflectors are for: very long throws of relatively narrow light beams. In bright sunlight, I’ve seen hard aluminum units set as far as 100 feet away, from which position they can spread a broad, diffuse light on subjects without hurting their eyes.

Here, the keys to success are angle and distance. If the wall is parallel to 12 o’clock, behind the subject, try to get the reflector as close as 11 o’clock (sun angle permitting) to rake the background with an oblique wash of light.

If you have the resources, aim multiple reflectors at different areas of the background (I’ve used three or four) . With care, you can producea variegated and interesting wash of light that looks quite natural.

Or you can go a step further and use an improvised cookie. A cookie, short for "cukaloris" (a word lost in the mists of theatrical history), is a stencil pattern of leaves, bars or whatever you like that is placed between a spotlight and a surface. Cookies create interesting light and shadow patterns.

Hard aluminum reflectors throw a concentrated light beam that you can place cookies in front of them to create surface patterns. To control the effect, move the cookie closer to the reflector for softer edges or farther away for harder ones. Because of the large surface areas of reflectors, the cookies must be much larger than those used indoors with spotlights. Outdoors, I sometimes improvise and use a dead branch with leaves still on it. Even if the leaves move in the wind, the effect on the background is quite natural.

If you’re working with just one spotlight, use it as a key light and place a large, white card out of frame on the opposite side . The result is a very soft, natural looking fill light. You can even soften the naturally hard spot beam a bit with spun glass diffusion (e.g. a furnace filter) and still put out enough light for the reflector.

Even if you have more spotlights, you may want a softer look to your lighting design. To achieve it, turn the lights away from the subject and bounce them back in with reflectors. In this application, metallic cloth or crinkled aluminum types work better than ultra-soft white cards. Carrying this to its logical conclusion, I’ve seen studios with 8×8 foot white walls on roll-around stands that make jumbo-sized reflectors delivering window light quality soft illumination.

So there’s a quick rundown on reflectors. Once you see how versatile they are, you’ll realize that reflectors aren’t lights for poverty-stricken productions: they’re versatile tools that pros use all the time.

Gold reflectors are very useful for warming up the light they throw. Here are just a few ways to use them: