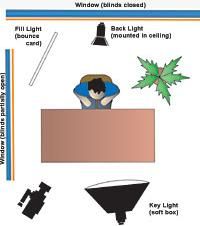 Three-point lighting is familiar to anyone who has been reading Videomaker for a while. You’ve read about it, seen pictures and understand it – in theory. In this months column I’ll take you with me on a typical location shoot, from the time I choose my equipment until shooting begins.

I was recently called to do an interview featuring a corporate CEO who worked in a big, beautiful corner office with huge windows and a desk large enough to field a pee wee football team. Behind the desk was a long shelf that ran under the windows and was full of awards, family pictures and knick-knacks. The CEO was a personable guy with large glasses and shiny bald head. I had one hour to setup and complete the interview.

Preparation always begins at home. I started with my favorite interview key light, a Lowel Caselite. This light is a fluorescent soft light that has the capability to change out lamps so that you can light for an indoor or outdoor color temperature.


Since I would utilize three-point lighting techniques, I’d need a backlight and a light to fill in the shadows. For the backlight, I chose a Lowel Tota. This small light, as well as its tripod and other mounting equipment, easily fits in the Caselite’s carrying case. I also tossed in some blue gels and a gel frame just in case I wanted to change the light’s color temperature, a couple of diffusion gels to add some softness to the light and some neutral density gels to reduce the intensity of the light if needed.


To my accessory bag I added some gaffer’s tape, a piece of foam core, some clothes pins, a few scissors clamps, an extra light stand, extra lamps (bulbs), an extension cord, a couple three-to-two prong electrical outlet adapters and a small compact with neutral colored face powder and some handkerchiefs.

When I got to the office, my first concern was deciding where to put the camera and dealing with the windows. I decided to close the vertical blinds that covered the window behind his desk and partially close the blinds on the window to the left of his desk. I did this for two reasons. First, the window behind the desk provided an interesting blue striped background behind the CEO during the interview. With the blinds completely shut, the outside light shaded the seams between the blinds with a light blue, adding a nice touch of color to the scene. Second, the light coming through the partially closed blinds at the side of the office provided a subtle blue tint to the fill light on the left side of the CEO, again adding a bit of soft, dramatic color. Closing the blinds let me control the light as well as the overall color temperature of the light in the room.


The physical space was my next concern. Because the desk was so massive, I decided to use just a corner of it, providing a surface for the CEO to rest his hands if needed, but not showing enough of the desk to create too big a separation between the CEO and the audience. I also made sure that the camera could see a group of family pictures behind and to the side of the CEO’s chair, adding a personal touch to the scene.

I used my soft light as the key light, positioned to the right of my camera about three feet away. I then raised the light so that it was at about a forty-five degree angle above his head pointing directly at him. The soft key light cast a smooth, even glow on the CEO and the set.

I then set up my back light directly across from the key light, behind the CEO’s chair. Using a scissors clamp, I clamped the small Tota light onto one of the metal strips used to hold up suspended ceilings. I then ran the cable along the ceiling, fastening it in place with some gaffer’s tape. This light, positioned about forty-five degrees above and behind the CEO, provided a light on the back of his head and shoulders to assist in separating the interviewee from the background.

It was now time to consider the fill. At this point, I asked the CEO to take his place in his chair so that I could see the effects of the two lights I had already placed. After adjusting the back light so that no light was shining on the top of his head, I looked through the camera’s viewfinder to see what I had accomplished. The light coming from the side window was adding a little too much blue to the scene so I decided to fill in the left side of his face with light reflected from the backlight with a three by four piece of foam core. This light diluted the blue from the window and filled in some of the shadows created by the key light. If I had wanted to create really dramatic lighting, I would have moved my key light further to the side and reduced the intensity of my fill light, making the camera-left side of his face darker than the right.

Looking through the viewfinder, I immediately saw the two problems I knew I was going to have to contend with: glasses and a bald head. The head was no problem. I pulled out the makeup powder and after a few jokes, I patted down his forehead and the top of his head, reducing the glare tremendously. The powder not only absorbs any perspiration there may be, it also gives the skin a matte finish. The glasses are a bigger problem. I first had him tilt the glasses down by slightly lifting the back of the earpieces. This helped a great deal. I then moved my key light a bit further to the side and a bit higher, watching the glare on the glasses until it disappeared. Some might ask, "Why go through all of this trouble? Just have him take his glasses off." Most people that wear glasses all of the time just don’t look like themselves if they take them off. If a CEO is making an address to the troops, he wants to look relaxed, comfortable and like himself. It’s worth the effort.


Once I fixed the glare, positioned the family pictures perfectly in the viewfinder (also checking for glare in their frames) and checked my talent one more time, I positioned myself to the left of the camera so that my eyes were at the level of the lens and began the interview, having the CEO look at me instead of the lens.

A Few Notes About The Overall Experience

[Sidebar: Peripherally]
Any time you find yourself shooting an interview in someone’s office or home, use the time while you set up wisely. Engage your subject in conversation. Tell them what you are doing and how you will conduct the interview. Go over the first few questions with them as you position your camera and hang your lights. I really try to get to know my subjects in the time that I am setting up. I find it makes the interview process go a lot easier.

Don’t be afraid to ask your subject if you can move things around. I have yet to ever come across someone who wouldn’t let me rearrange their office. Explain to them what you are doing and why. Most of all engage them and make them feel like the whole interview process is fairly pain free and fun.

[Sidebar: Dramatic Intensity]
Keep in mind that when doing interviews, you want to use a soft light as your primary light source, unless you are trying to create a very dramatic look and want to see every wrinkle in your talent’s face. In that case, you would use a small, intense light to create a hard light with sharp shadows.

A long time ago, in an industry that now seems a lifetime away, accessing gear to make films was a very expensive proposition, and...