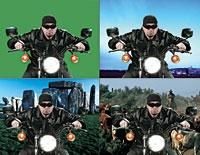 Eureka! You just had a great idea for your video, but how are you going to place your talent inside a lavish landscape when your available surroundings are dull and dreary? That’s where special effects come in. Thanks to chromakey, you can have your talent trudge across the frozen tundra, drive through the streets of Paris or stand 10 feet from a hungry lion, without leaving the comfortable confines of the studio. You can also shrink your talent down to miniature proportions so that they can walk around a product or through a giant landscape.


While the basic premise of using chromakey is pretty simple to understand, lighting for chromakey can be tricky. Even in high-profile studio broadcasts, you may notice something odd about a scene that gives the chromakey away. In extreme situations, a bad key can leave a fuzzy halo around the talent. In this column, we will take a look at various uses of chromakey and how you should light the set and talent.

What is chromakey? We’ve all seen it performed a million times over the years when the TV meteorologist stands in front of the weather map on the nightly news. This is done by electronically selecting a color (or chrominance value) in the scene and then making it transparent (or "keying" it out) to allow a background to show through. Keying is not limited to chromakeying (based on a color value), but can also relate to brightness (luminance).


In a key, all of the pixels of a similar color or brightness value become transparent, allowing another layer of video to show through. The secret is to shoot your talent against a background that you can easily key out. Broadcast stations usually shoot against a solid green or blue wall, making sure that the talent is not wearing similarly colored clothing. The weather person points to places on the map, which actually is just a green wall, and looks into a monitor just out of the camera’s view to see where he is pointing.

When lighting a scene for chromakey, keep a couple of things in mind. First, light always reflects back the color of the surface on which it shines. If you shine a light on a green wall, it will reflect green. This may seem obvious, but don’t forget that this reflected green light is not just being reflected back to the camera lens and your eyes, but is also spilling onto your talent. The subject will be bathed in a pool of reflected green light, exactly the color you are trying to key out. For this reason, it is very important to move your subject as far from the backdrop as possible and to make sure that there is a strong white backlight to wash out any light reflected off the chromakey background (see Figure 1).


The other major issue is the lighting of the background itself. You need to light the background as evenly as possible, so the color range and brightness of the wall will appear as uniform and narrow as possible. The computer uses a very small range of colors for the keying effect. The smaller the range of color, the cleaner the chromakey. To get an even light across the background, use lighting instruments that offer diffused, even light. Depending on the size of your background, you can usually use a couple of lights set up above the background, shining on the surface from about a 60-degree angle (see Figure 2). By lighting at a steep angle, most of the light will reflect onto the floor and not the talent. Make sure that there are no shadows or hotspots. If you do not have large, diffused lights, use a scrim or gels to diffuse smaller instruments. It is always best to have a floor that is either the same color as the chromakey or is non-reflective, so that it doesn’t pick up the background light.

Creating a clean chromakey is only half the battle. The other is making it look as real as possible. One important way to accomplish this is to carefully study (or plan) the footage or scene you will use as a background.


Ask yourself, "Is it indoors or outdoors? What time of day is it? Where is the primary or key light coming from? What kind of light is it; is it hard or soft, bright or dark? What is the mood of the scene? How large should the talent or object be to look real in the image? Does the background move and, if so, which direction and how fast? Should there be wind, rain, or some other effect added to the shot to make your subject blend with background scene?"


Once you have asked yourself these questions, it is a simple matter of matching the talent or object you plan to shoot with the background you will key in later.

If the background footage that you’ll key in was shot indoors, it should rather simple to match the color and direction of the lighting. Make sure your talent’s key and fill lights come from the same direction as those in the scene. Flag the key and fill so that they do not spill extra light on the chromakey wall and create bright spots. Keep in mind that you can have the key and fill appear as dramatic as you wish. Just because you shoot against a bright green background doesn’t mean the shot won’t turn out to be dramatic. Turn off the lights that illuminate the wall while you set up your key, back and fill lights, to achieve the desired effects. This will also help you find those places where you need to flag the lights to keep them off the background (see Figure 3).

If the background footage that you’ll key in was shot outdoors, make sure you know what direction the sun was coming from and the prevailing type of sky. If it is an overcast day, set up a very diffused light and fill the talent with even light. If it is a bright, sunny day, light the talent with a small, bright light that creates hard shadows. Be careful to duplicate the direction and angle of the sun. Also, be sure to flag the light, so that none falls on the background. For those partly cloudy days, have a crew member occasionally move a small, narrow flag across the light to give the impression of passing clouds. Add a quiet fan that blows in the same direction as the wind in the background. It’s amazing how the addition of a little wind and some sound effects pulls the audience right into the scene and allows them to accept the scene as real.

Putting It into Action

The scene: a motorcycle drive through the country on a bright spring day. To begin the preparation for the shot, shoot the required background footage.


Once you are back in the studio, park your motorcycle in front of the green chromakey background and light it to match the brightness of the day’s footage. If it is a bright, sunny day, use only one very bright, hard light, coming from the direction and angle of the sun in your scene and with white cards bounce fill light just out of camera shot. Make sure that no green light reflects on the cycle. Remember, if it is green, it will become transparent.


Using bounce cards, light the rider’s face. You can supplement the light by adding gelled fluorescent lamps that lay on the ground hidden behind an artificial shrub. Get someone to rock the cycle to match the type of road in the scene. Also, play the road footage for the talent, so he knows when to lean. Be careful with shiny surfaces. They will reflect back the studio lights. Add a little wind to blow on your talent. Later, when you edit, add the background footage, some cutaways and some road noise and you have a very convincing road trip. 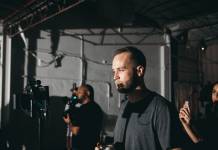