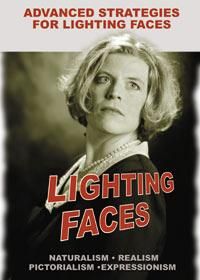 All right, you’ve mastered the basics of lighting talent: key, fill and back lights, and maybe a splash on the background. But this one-size-fits-all approach doesn’t account for Abel the chinless wonder, Bravo who’s way over-nourished, or Charlie whose nickname is Schnozz. To address the problems (and opportunities) of different subjects you need to use different techniques; so here are some moderately advanced strategies for lighting faces.

We’ll explain how to slenderize Bravo and minimize Charlie’s honker; but before you start lighting a face you need to back up two steps and determine the effect you want to achieve and the style you’ll employ to achieve it. (Obviously these decisions apply to all lighting, but we’ll concentrate here on just faces.) Control of lighting effect and style separates true videographers from weekend warriors.

A Matter of Style

Though theories of lighting style can get pretty esoteric, the practical basics are simple. There are just four fundamental styles of lighting: naturalism, realism, pictorialism, and expressionism.

In lighting faces, naturalism means large source key lights (to simulate windows, overhead fluorescents, etc.) or small-source keys placed lower than average to imitate room lamps. Fill light should be undetectable by civilians and artsy hair lights are a no-no. (To separate subject from background, make sure instead that there is a natural difference in color or contrast.)

Realism emulates natural lighting but punches it up a little for effect. In order to light in realistic style, you:

In realistic lighting, you may wash the background with light for effect, but avoid obvious patterns. Set fill light intensities to lighten shadows more aggressively than in natural light, but still not too obviously.

Realistic portrait lighting keeps a decent contrast between the key side and fill side of the face. In general, lighting faces to look slightly brighter than the bodies subtly emphasizes them.

Most corporate videos and programs made for TV use realism. Most bread-and-butter movies are also lit realistically.
Pictorialism is the style of classic Hollywood movies made before the sixties. In this style, the lighting is still motivated by natural sources such as daylight or lamplight, but the intention is frankly "Artistic" (An influential lighting textbook from this period was titled Painting with Light). To light in the pictorial style, you:

Pictorial lighting on faces delivers the studio look that, at best, recalls Garbo at MGM, but, at worst, resembles mug shots in an old high school yearbook.
Expressionism is a frankly unrealistic style whose intent is to convey emotion. From The Cabinet of Dr. Caligari to Edwards Scissorhands, expressionistic lighting makes the image insist, "Hello: this ain’t life; it’s a movie!" There are no rules for expressionistic lighting but there are a couple of general principles:

When you light faces expressionistically, you can set a key light in an odd position (like under the chin, for a Bela Lugosi effect) or omit fill light entirely and let the off-key side of the face go black. In short, anything goes in expressionistic lighting, as long as it delivers the intended impact.

The Power of the Face

The tips we’ve delivered here are only general guidelines. You will want to modify or just ignore them to suit the needs of individual faces. In lighting individual performers you need to account for four things: gender, facial shape, skin condition and features.

Despite slow advances in gender equality, people still tend to equate feminine with soft and delicate, masculine with hard and tough. To soften a face, use a large-source key light with strong diffusion and place all your lights to model the face subtly. (In low-key lighting, this can be quite a trick.)

To ruggedize a face, go the opposite route: pick a small-source, highly directional key light to throw features into sharp relief. Adjust key and fill intensities to accent the eyebrow and jaw lines.

Faces come in three main shapes: round, square and long/thin. Use broad front light on a round face and you’ll turn it into a beach ball. Side-light a long face and you’ll make it as thin as a pencil.

Actually, you often do want to front light a round face. The trick is to restrict the key to a narrow vertical band and let the sides of the face fall off into shadow. The slimming effect can be dramatic. With a too-thin face, place both key and fill lights well around to the left and right, so the sides are actually brighter than the front. Calling attention to the cheeks and ears makes them seem more prominent.

But before you move lights around to the side, consider skin problems. Pimples, facial scars and wrinkles are all emphasized by side or back-cross lighting, which throws them into relief. So if you have a thin face with skin defects, a more frontal lighting scheme may be the lesser of two evils.

As for aging subjects, you can simultaneously minimize baggy eyes and sagging necks by using a fairly low key light and masking it off the neck with a flag or barn door. If you’re working in a more naturalistic style, a very large diffused key light tends to wrap around facial nooks and crannies, to minimize the relief map effect.

And now we return to Charlie the Schnozz. Noses often give lighting problems and the solutions are as varied as the noses. In general:

Moving on to other features, bring out a weak chin by highlighting it and leaving the neck in shadow. As for ears, Clark Gable and Prince Charles gave up the fight and grew their side hair long. All you can really do is ensure that excessive rim lighting does not further emphasize jug handles. (Another non-lighting tip: a 3/4 angle will hide the off-side ear and back the near one with the side of the head, thereby de-emphasizing its outline.)

Now let’s back up a bit. These facial lighting tips have all been aimed at minimizing facial problems; but at times you want to exploit them instead. If your gravitationally challenged Bravo is playing Jabba the Hut, you don’t want to slim him down. On the contrary!

The distinguished actor Edward James Olmos has a thin face with prominent scars. In Blade Runner his close-ups were lit to emphasize these features, to great dramatic effect. In Alien, from the same director, Sigourney Weaver’s facial angles were often enhanced rather than softened, to convey a sense of strength and determination. We could go on, but the point is clear: whether you dramatize facial features or minimize them depends on the needs of your program.

Meanwhile, out on the lawn…

So far, we’ve been working indoors with multiple lights (and the power to heat ’em up). But unless you’re a big production, outdoor light control means reflectors and maybe a net or silk to soften the harsh light of the sun. How much sophisticated lighting can you do with this simple equipment?
Plenty. You already know the basics about reflectors, but have you considered the fine points? For example a gold foil instead of silver is invaluable for close-ups, to banish the blues from outdoor shadows, warm up flesh tones (especially feminine) and enhance the warm tones of late afternoon shooting. Most art supply stores carry foamcore boards faced with gold foil.
Don’t forget to keep foil reflectors back from the talent: they can be painful or even dangerous to unprotected eyes. In fact, it’s generally better to use metallic reflectors beside or behind the performers, to deliver rim light that separates them from the background. Cloth reflectors provide better front fill; or you can buy foamcore covered with golden, orange or yellow paper. Experiment to determine which tint works best.
Though you may know all about reflectors, you probably aren’t using silks or nets (also referred to as skrims or diffusers), which allow far more sophisticated outdoor facial lighting. Silks (which are really synthetic fabrics) are translucent panels, nets are black screens, and both can be bought or cheaply made and supported on lightweight frames (PVC Schedule 40 pipes and elbows will work great).
Use a silk between subject and sun to change the direct light into a soft, even illumination that loses harsh shadows and makes faces look wonderful. However, since silks radically alter the quality of direct sunlight, they can make face shoots look artificial, especially when the background remains in unfiltered light. Ms. Spokesperson is in a soft and luminous limbo while the tree behind her is still in Death Valley.
In this situation try a screen instead. A screen reduces the amount of direct sunlight without drastically changing its character (though it does diffuse the light just a bit).
And whether you work with reflectors, silks, nets or all three, you can apply the same techniques to facial lighting that you would use in an indoor location or studio.
So with your next production, work with your lighting to create a visual masterpiece.