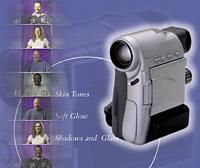 No matter what kind of video you prefer to make, eventually you will have to videotape another human being. Interviews, straight addresses to the camera or surprised video victims, all will benefit from this month’s topic, lighting faces. As we noted in earlier Light Source articles, lighting is an art, and as with most arts, one of the hardest things to do is portray the human element effectively. In this article, we will look at various techniques you can use to enhance the beauty or increase the dramatic intensity of the faces that fill your videos. We will answer the age-old questions of how to deal with someone wearing glasses, how to avoid a nasty glare if your subject is bald and many more.

All too often, people in front of the camera are more concerned with how they will look on the screen than the topic you’d like them to discuss. They are worried about their complexion, their wrinkles or their receding hairline. It is up to you to make them look good so they will relax and give you the performance you need.

If you are confronted with an older subject or someone with a poor complexion, lighting can perform miracles. You can easily erase unsightly craters and wrinkles from your talent’s face by using a large, soft light source as your key light. Keep in mind that you don’t need an expensive soft box to achieve this effect. An ordinary video light bounced off a large white card will achieve the same results, as it will increase the size of the light source. Place the card a couple of feet to the right or left of the camera and about thirty degrees up from the subject. The reflected light bathes the skin in a soft, shadowless glow that fills in the worst of bad complexions and decreases the number of lines on the face immensely. The larger the light, the softer the illumination, the smoother the appearance.

There is another simple yet effective way to decrease the age of your subject, as well as take off a few pounds. A while ago in New York, I visited the set of a network morning show and noticed the peculiar job of one of the union electricians. He spent his entire shift moving a small light around the set so that it softly lit the lead anchor below the chin. Looking at the monitor you would never notice the light, but when he moved it away after the shot, there was a noticeable difference. Without the light, the anchor seemed to gain at least five years and ten pounds. If you want to duplicate this age-defying feat, but don’t have and extra light, you can place a three-by-three foot white card just out of the camera shot to bounce light up under the subject’s chin.

If a receding hairline is the problem, your best bet again is a soft light. By diffusing the light to spread it across the entire head evenly, you will decrease the chance of getting a bright hot spot on the talent’s head. An even, liberal coating of powder will help reduce shine on the head. This powder, along with the large soft light, will produce a nice soft glow instead of a glaring spotlight.


One unique feature of the human face is its variety of skin tones. As a video producer, you may encounter skin tones that vary from deep black to translucent white, all requiring special lighting attention. No matter what skin tone your subject has, the first thing you need to control is the contrast between skin tone, clothes and background. The video camera has a very low tolerance for contrast between lights and darks. If your camera has only automatic exposure control available (as most consumer cameras do), and it sees a white shirt on a dark-skinned person, it will close down the iris to compensate for the bright white shirt and your subject’s face will become very dark and hard to see. If you open the iris to see the subject’s face better, the white shirt and light background will begin to glow. The opposite is also true. If the camcorder sees a black shirt on a fair-complected person, it will open the iris to see the shirt, and the subject’s face will begin to glow. If you close the iris to compensate, the shirt and the dark background will become muddy dark blobs with no definition. Because of the inability of the camcorder to deal with high contrast, keep in mind the following: if your subject has a very dark complexion, you must avoid light-colored clothing and bright backgrounds. Likewise, if the subject has a light skin tone, avoid very dark clothing and backgrounds.

For people with dark skin tones, you have the added problem of the contrast between the light itself and the subject’s skin tone. To get the best lighting, you want to light the subject’s face with a large, soft light, set close to the camera. This will spread out the light on the face and provide a nice, even light. If you have to videotape your talent with light clothes, you can use a black posterboard mounted on a C-stand in front of the lighting instrument to block selected portions of the light. This reduces the contrast between the light clothes and the talent’s dark skin tones. This technique is called flagging the light, and the piece of posterboard is called a flag.


The most important of all the features on the human face are the eyes. The videographer has to make sure that the viewer gets the best-looking eyes possible. This need to see the eyes clearly and have them look great creates its own set of lighting problems.

Making the eyes sparkle is a technique that Hollywood has used for years. That speck of light is a reflection of a light reflected back to the camera. One assignment I often give my students is to examine photographs and tell me exactly how the photographers lit the models and what type of lights were used. One of the easiest lights to detect is the eye-light. Viewers like to see the eyes sparkle, yet often normal three-point lighting will not give such a sparkle. If you are in a situation where the lighting is not set up for interviews and not specifically set for faces, you can still get this catch of light. By placing a small light just above the camera, you will get a small sparkle of light in the subject’s eyes. An on-camera accessory light works well for this. Make sure the light is less intense than any other light hitting the subject’s face so that it doesn’t become obvious. You will be amazed at how much this little catch light brightens the talent’s face.

Through the Looking Glass


Glasses can be very difficult to light properly. If you light someone wearing glasses using the typical 30 to 40 degree upward angle on the key light, you will probably end up with a glasses-frame shadowline going right through the subject’s pupils. If you place the light too close to the camera you end up with reflections of your lights in the lenses of the glasses. Avoiding these two problems will take some experimenting on your part. Position your first lamp like a normal key light and raise and lower it while watching your subject’s eyes and the lenses of their glasses. By diffusing the light to make it as large and soft as possible, you can reduce the amount of shadow made by the frames. You should be able to find a happy medium between glare and shadows. A soft fill light will fill in any shadows cast by the key. There is no specific formula because every pair of glasses has a different frame and a different curvature to the lens. In a pinch, you can try tilting the subject’s glasses up a few degrees on the ears to make them point downward, thus avoiding the glare problem altogether.


Lighting faces is one of the keys to professional-looking video. By following the tips given here and experimenting a bit with your own techniques, you can be assured that your next interview has that professionally lit look.