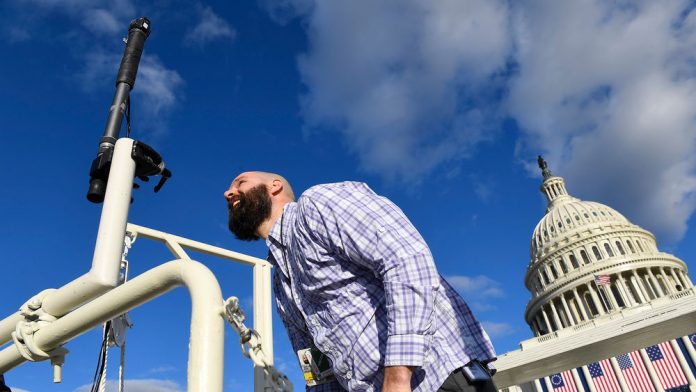 It doesn't matter which side of the political fence you sit on, the 2017 Presidential Inauguration was a historic event. It will be remembered, by some, like Harry Truman’s inauguration of 1949, the first to be broadcast on television. The inauguration of President Donald Trump is the first to be delivered live in spherical video. This may have gone by much of the country without notice, but that was likely true of 1949 broadcast, as well. In the late ‘40’s less than 1% of homes in America had a television.

You may have only been aware of the broadcast if you saw the announcement on one of the news outlets who was carrying the event in 360, or you happened to be browsing their YouTube channel. USA Today made a big splash with their live feed, made possible by a partnership between the news corporation and Nikon. Kosuke Kawaura is the Director of Marketing and Planning for Nikon Inc. and he tells us, “Nikon worked exclusively with the USA Today Network to customize KeyMission 360 cameras that allowed the outlet to livestream in 360-degrees via in-camera stitching.” The KeyMission camera does not have live streaming capabilities and, although no specifics were available, that is part of this customization. It's not clear if this feature will be added to future models.
Kawaura tells us that that this event was chosen because of it’s importance, “The inauguration of a U.S. President is a historic event for the world and a significant opportunity to give consumers an immersive experience, and participate with a view they have never had the chance to see before.” He says that this is not the end of the partnership, “Nikon will continue to work with professional organizations such as the USA Today Network to provide journalists with the tools and technology they need to create compelling and immersive content to engage viewers like never before.” That is great news for the spherical future.

How Did it Look?

Watching the live feed, you really can get a grasp of the magnitude of the event that is really not captured in standard video. From the vantage point from one of the press boxes, where each of the three cameras were positioned, you can see the front of the Capitol filled with people. You could look up and see the beautiful rotunda. You could also turn around and see the crowd that gathered all over the Capitol grounds. One group of people would have been totally blocked from the actual event behind the building, but were watching on a video monitor. You also had a better perspective of where everything was located. For example, the choirs and musicians were immediately behind and above the podium on a separate balcony.
The one drawback with spherical video coverage like this is the inability to capture close up shots, however. Just as the early television cameras were unable to zoom in, there is no zoom on a spherical camera. Surely protocol would not allow a camera to be placed right on the podium, but that would have given a better experience — to have seen the new president and then turn around to see his view.
The USA Today feed overcame that drawback by placing an 2D floating box above the Capitol Building. You could see the close up at the same time as the spherical wide shots. When officials were introduced, you could see them exit the Capitol door, and the close up gave you an identifiable image. With the spherical shot alone, you would never have been able to tell who each person was. When someone was speaking, you found yourself primarily watching the 2D shot.
Another drawback, made more evident with the split screen, was the quality of the image. The KeyMission will do a fine job outdoors in good sunlight. You can see some good images on their web site. Unfortunately, Inauguration Day was overcast, and the colors looked very muted from the spherical shot. The colors from standard camera shot looked much better.

If you are looking at creating in spherical video, you need to watch feeds like this with an eye for improvement. For example, get your camera in closer. Place your camera into the middle of the action. Standard video is a window you look through. Placing a spherical camera in the same spot is only going to give you a window view. It’s going to take time for event organizers and media relations people to understand how spherical video works best. Then they may allow cameras to get right in there. Nikon’s KeyMission is small and the perfect size for this type of application. Imagine if there were more cameras placed in the press boxes with others brought in near the subjects. This would help to tell the story through spherical video much better.
Because this medium is in its infancy, the footage of today will only improve. If you viewed the 1949 inauguration, you would see how far television has come. How much better will spherical live feeds look in 70 years? How much better will they look in just four years, when we have another inauguration? Let’s keep experimenting and let's keep capturing events in spherical video. Most important, encourage continued partnerships like news agencies and camera companies, so the coverage and quality improves.
Jeff Chaves is the Chief Creative Officer of Grace Pictures Inc., which he co-owns with his wife, Peggy. He got his start as an Army Broadcaster in the 1980s and spent 12 plus years working in broadcasting. Jeff left broadcast television to pursue full-time ministry.