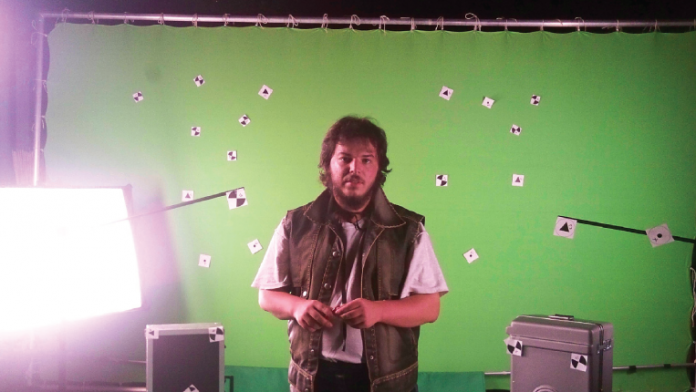 We'll look at some common problems and see how you can fix them while you're shooting. We'll also examine some common visual effects (VFX) techniques that can be used to fix bad chroma shots.

How the Magic Works

Keying is a compositing technique, but it’s not the only one. Typically, compositing is the art of taking multiple images that were not captured together and blending the assets to make them look like they are one singular image. Compositing includes adding things to shots, removing things from shots and painting things out from shots in addition to bringing shots together. It is a process that employs multiple skills including keying, color correction, rotoscoping, matting an object and lighting correction. Compositing is a multi-step process that often starts with a key or a rotoscope. Before we get into some common lighting problems, let’s take a look at how chroma keying actually works.

When you chroma key, the computer program takes all of a singular color or luminance value and removes it. In other words when you key out a green screen, you are inherently getting rid of everything that is that color green in a shot. This is why it is important to control exactly how much green you are keying out so you don’t remove parts of the image you want to keep while removing the green screen.

When a key is pulled, the green area of the shot becomes transparent. This transparent area is referred to as an alpha channel. If you key a shot and want to save it for later, you need to use a file format that supports alpha channels so the transparency information is not lost. A video file that is RGB + Alpha will save your color and alpha channels. You may also want to save it as uncompressed or with lossless compression to preserve your image quality and to make your compositing easier.

A huge error that many filmmakers make is thinking that it is cheaper and easier to fix all production problems in post.

Often when keying, you’ll need to use a matte to prevent an area from being affected by a chroma key. Mattes can be used to remove or isolate anything, and their shape, size and position can be fixed or animated. The process of rotoscoping (roto) is when you remove an object by drawing a matte around it. Roto mattes are usually animated, often frame by frame. Rotoscoping is often a last resort if a key isn’t working because it is a very time consuming process.

Choosing the right color for your chroma screen for your shoot can mean the difference between rotoing a field of grass (if you put a green screen outside on a lawn, for example) or getting a perfect comp.

Typically, green screens are for shooting in the studios, blue screens for shooting outside, and magenta for covering objects that need to be placed into a green field bordering a blue sky. Like everything, there are some minor exceptions to this rule. If everyone’s wardrobe is blue, you wouldn’t want to use a blue screen. As you work with chroma screens, you'll find other exceptions such as not shooting an actor with golden blond hair against a green screen because the golden color is susceptible to bleed as a result of the colors being too close to each other on the color wheel. This is part of the reason why magenta screens are not heavily used. The color is too close to red, which is a major component of human skin tones. As a result of this, green, which according to color theory is the opposite of red, has become a very popular color for chroma screens.

A huge error that many filmmakers make is thinking that it is cheaper and easier to fix all production problems in post. When encountering chroma screen issues on the set, this is the furthest thing from the truth. Yes, the compositor can fix that blue chroma screen with people wearing assorted shades of blue clothing in front of it with tons of rain and fog and bad lighting, but this takes time which costs money, usually lots more money than if it were fixed on the set.

Pelting your actors with water and rain doesn’t always make for the best compositing plates. Similarly, flooding the set with smoke or fog can create equally undesirable keying issues. These types of effects should be avoided while shooting as they tend to diffuse and reflect light in ways that are hard to control. Transparency and fuzzy edges can also be an issue when compositing. Add these atmospherics in post for faster, quicker and easier keys.

Similarly, sets with large amounts of reflective objects or glass can become a keying nightmare, which compounds the problem when composting.  To get around this limitation, there is a current trend with some directors to shoot as many effects as possible practically. For example, in the 2013 film “Oblivion” starring Tom Cruise, they found that using rear projectors instead of chroma screens for their windows and set extensions for the sky tower not only saved them money, but it allowed the production design team to use shiny, reflective surfaces on the set.

Sometimes, lighting in the two separate images you want to composite do not match. For example, the lighting in the main plate could indicate road flares on the ground which cast an upward light while the subject on the chroma screen was lit from above. In order to get the lighting to match, the compositor has to roto the subject in order to use a mixture of color correction and digital painting to change the perceived direction of light. There are new automated systems being developed to try and fix this issue; however, they are still in their infancy. In general, it’s better to fix these kind of lighting issues during production. If you know what your background plate will be, notice the direction and intensity of the light source in that image and try to replicate that on your green screen set.

A mistake often made by inexperienced compositors is to mirror the background plate or, even worse, the subject. The reason this is a mistake is that it can ruin continuity. For instance, a right handed character suddenly becomes left handed. If the character is a soldier, his name on his uniform will suddenly and comically appear in reverse. In severe instances, it can throw entire scenes off. While the trick may work for a single shot that was not properly planned, in a sequence with multiple shots it probably won't hold up.

Once the key is pulled, properly color correcting your chroma keyed elements to match your plates is essential when it comes to selling a visual effects shot. If the key is a background or set extension, then it usually is corrected to the subject or subjects. If the subject on the chroma screen is getting added to a scene with other people or a filmed background plate, then the subject is usually corrected.

When adding objects into the distance such as a giant fortresses on a plate of mountains, it's important to keep in mind the concept of Rayleigh scattering. Rayleigh scattering is an optical effect caused by looking through gasses, such as the ones in our atmosphere. As a result, it can make objects like mountains look blue or even purple in the distance.

From correcting for lens distortion to adjusting for perspective to adjusting shadows, it’s the little details that make or break a shot. One little detail that can really help sell a chroma screen shot that has been inserted into a CGI background is having objects appear in both the foreground and background.

Possibly the biggest mistake people make is overusing blur to sell composites. When you create unnatural blur, it causes the image to be softened to the point of being out of focus. The goal of any composite should always be for the shot to look as natural as possible unless, of course, your director or producer says otherwise.

There is no universal method for using chroma keys or compositing. Some people like green screens over blue; some people like nodes over layers; some people will fight keys and use a large number of keys to isolate every color; some people will just roto. In the end, what works the best is whatever you need to reliably make the shot consistent. Remember: a short shot doesn't have to be amazing; it just needs to be good enough to sell the illusion.

An old school form of analog and digital keying was a luma or luminance key. This form of keying was originally accomplished by using multiple layers of film emulsion and multiple exposures. Luma keying was used heavily in the original “Clash of  the Titans” (1981) to key out the shadows leaving only the highlights or vice versa. As digital keying improved, luma keying faded from use; however, it is still used today for certain visual effects shots as well as night time window replacements. The reason it is still popular for night-time window replacements is that it lets the window be dark and does not require a chroma screen.

WÃ©land Bourne is an award-winning filmmaker as well as a VFX and motion-graphic artist.