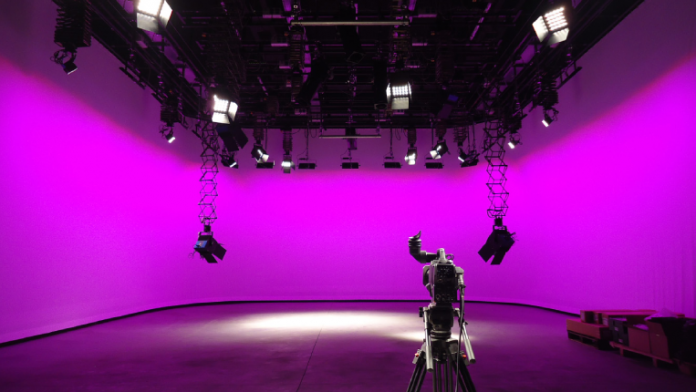 A cyclorama is a stage background that was developed during 19th century for the purpose of providing a smooth white or colored surface, thus a creating the illusion of a larger background. Initially, fabrics such as muslin or canvas were used. These were stretched on the sides and weighted on the floor when in use and could be easily rolled up and stored. These early cycs were simple flat surfaces that went straight down to the stage floor. The union of the floor and the cyc was visible from the audience because there was a straight, abrupt angle which created shadows. Eventually cycs were laid on the surface of the stage to form a curve, and the lighting director, with proper lighting, could eliminate any shadows, thus creating an “infinity cyc.” The purpose of a cyc is to create a smooth transition from floor to wall to help eliminate hard shadows at the horizon and allow for an “infinitely” large set. Cycs are common in most video studios, and most have at least one “cyc” surface on the floor. Many have one wall cyc as well, and some larger sound stages have a true infinity wall where all four corners are curved. Some of these larger studios can accommodate items as large as a semi truck with a trailer!

There really is nothing magic about a cyc. The concept of a cyc is used in a small studio shooting table (figure 1) where not only is the horizon behind the set surface curved, but the foreground surface is curved as well. This allows for a smooth transition at the bottom of the set where supporting graphics may be placed, such as ad copy in an advertisement. Even though technically this is not a cyc because the surface is translucent, it serves the same practical purpose by providing a smooth transition between the floor and background while allowing for an infinitely large foreground.

This classic graduated background lighting is useful in informational videos because it’s clean, does not distract from your subject and is easy to create. In figure 2 the subjects are lit by one large beauty light, which spills over to both people. Behind the beauty light is a large soft box which softens the lighting while adding fill. You can move that closer or farther from the subject to alter its effect. On the right side of the set are two large reflectors that add fill light to both the subjects. You can see on either side of the set are two black screens preventing all this lighting from spilling on to the background. On the left of the set is a large soft-box which provides the rim light on the woman’s back. The background is simply lit with two large softboxes on either side of the set. This creates the smooth transitions on the background and helps conceal any flaws on the surface.

A cyc background also provides some opportunity for creative expression.

Imagine a subject is lit with one large fresnel light from his left, and there is some fill light provided by a large scrim lighting the entire set. To properly fill a large set with soft light, the light source needs to be at least as large as the subject, which in this case is about six feet. To achieve a soft, grey  shadow, the entire set is filled with soft light. If  there is not any fill light on this set, the shadow would be quite dark which would have changed the “concept” from light and cheery to, perhaps a bit more ominous. In a situation like this, a scrim is desirable over a soft box for several reasons. Cost is always a consideration and a soft box this large would be prohibitively expensive for most studios and portability is also important when considering equipment. Not only is a scrim this large easy to store and transport, it’s easy to set up. A great way to  accomplish the same effect as a large shoot-through scrim is to bounce your lights off a white large wall. Either way a common mistake when setting up a shot like this is to use fill lights that are too small  which yields  dark, muddy  looking images  even when properly exposed by the camera. With a few tricks, you can easily achieve the same results as the big studios using far less equipment and far less money. With these ideas and techniques with a bit of your own creativity, there is nothing stopping you from creating professional looking videos using cyclorama lighting.

Terry O’Rourke is a professional photographer and videographer who currently specializes in architectural, industrial and advertising production.