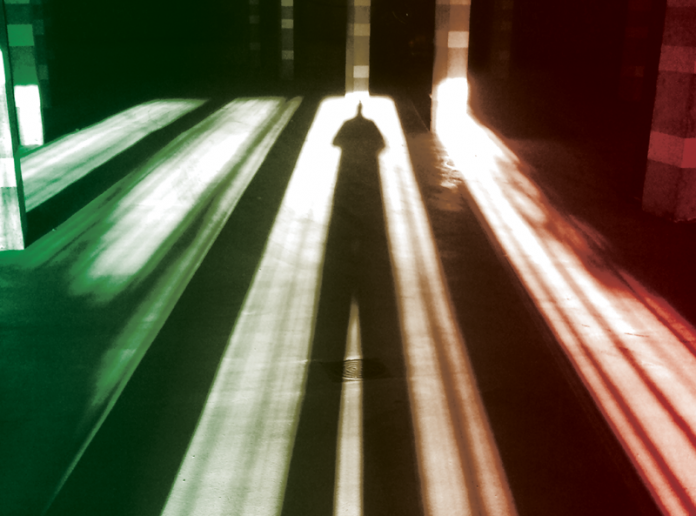 The best way to venture into the dark is with dramatic light because without light there really can be no dark and the first term that comes to mind when one balances dark and light is “film noir,” a classic style of lighting that gained popularity in the 1940s and continued to its dominance well into the ‘50s due to its innate ability to quickly invoke a sense of mystery and danger. Here we are going to learn how to take advantage of the “mystery” component of film noir lighting and apply it to simple lighting techniques that will have your audience squirming in their seats in anticipation of the next axe to drop!

The best way to venture into the dark is with dramatic light.

First of all, the great thing about film noir lighting is how easy it is to apply because you only need simple lighting fixtures and a robust imagination. Since most of your subject matter lives in the dark side of your lighting, all you need to do is allow glimpses of the scene and that can be done with simple raw, harsh, contrasty lighting.

[image:magazine_article:50281]Here is a great example of how one simple light in a room behind the subject creates a wonderful silhouette invoking a sense of mystery. There is virtually no light on the subject but obviously she is a woman who is standing in a somewhat provocative manner. Her stance, the room behind her and the total lack of light revealing anything about her allows the viewer’s imagination to run wild and each viewer will have a different  response.

Moving on to the next image and her intentions are quite obvious and dubious! This set up is quite simple. An open door, a white background and one light, yet it is so powerful. Take advantage of your camcorder's inability to render dark shadows and use it to move your audience into a place of apprehension or fear.

[image:magazine_article:50286]Here is another example of using one light to create a dramatic film noir scene. Here the subject is standing with the light behind him. Since the light is so low it casts a very long and ominous shadow, which not only exaggerates the shadows, but the movement of the subject as well, rendering each step he takes especially long and flowing. Here the sun, near sunset, streams across the concrete floor – impossible for your camcorder to capture without losing detail in the shadows; which is exactly the point! Once again use the camera’s inability to capture full detail in a contrasty scene and exploit your audience's ability to jump to conclusions! Who knows, he could simply be entering a bank to make a deposit, or make a withdrawal, if you know what I mean!

[image:magazine_article:50291]Once again, one light to create some horror lighting but this time there is a simple prop, too. Yep, that’s fabric and there is only one light, which is slightly behind the subject and camera right. The light is not directly behind the subject because you can see shadows in the face and you can move the light around while shooting to create a great effect. Move it fast and edit for a quick reveal or move the light slowly and change from a white light to a red gel and watch your audience cringe. Throw in a bit of creepy music, yank the cloth to reveal a bloody face and you might just find your audience outside catching their breath. [vm_ads:segment_break:2]

[image:magazine_article:50296]Speaking of red gels, how about some horror lighting that includes a bit of blood red effects? Here is dramatic horror lighting with two lights on the subject. Both are unmodified raw lights, each with their own gel. Since the lights are simple fixtures here is another opportunity to move the lighting around to create some spooky effects. You could substitute the green gel for a blue gel, make them both blink to simulate a police scene. Or you might try an orange gel, make it flicker by shaking a “cookie” or correctly referred to as a “cucoloris” to simulate a classic campfire scene where everyone carefully weaves tales of chainsaw, axe and knife wielding creeps wandering around in campgrounds looking for unsuspecting tourist's sitting around campfires telling scary stories. Cookies are easy to make, just find a sturdy piece of cardboard, cut various size holes and jiggle it in front of your light. The beauty of Halloween lighting is just how simple it is and with today’s modern camcorder you don’t even need a lot of lighting power to effectively create horror scenes. [vm_ads:segment_break:3]

Sometimes in horror lighting you want to direct your audience's attention to one part of the scene while suddenly, or even slowly, revealing something in another scene. That’s where the deep shadows come in. Mystery lives in the shadows and slowly unveiling the mystery promotes tension and suddenly releasing that tension creates a shock for the viewers. A great way to create this situation is to place the “victim” in soft, flattering window light while the “perp” hides in the shadows. Imagine an unsuspecting person in a warmly lit room where the setting sun drapes the room in soft window light as a gentle fire warms the room. A soft, low tension situation, while down the hallway lurks in the shadows a dimly lit tall figure with something, perhaps something sinister in his hand. The lighting is just a bit too dark for the viewers to make out exactly what is in his hand and cutting back and forth from the soft, warm room to the dark figure in the hallway creates tension and the audience begins to sense something is wrong just because they can not make out what the “perp” is carrying. As the audience fills in the blanks left by the dark lighting the perp suddenly opens the door and offers the victim a nice cup of tea and once again all is well. If you repeat this technique several times during your horror film, you’ll have the audience in the palm of your hand and they will become accustomed to your mind tricks and just when they no longer fall for it, you finally unleash the real horror proving once again that the mind, especially your audience's mind truly is easy to fool! So, go ahead and take advantage of that weakness and scare the stuffing out of them. Who knows, some day they might just want to return the favor.