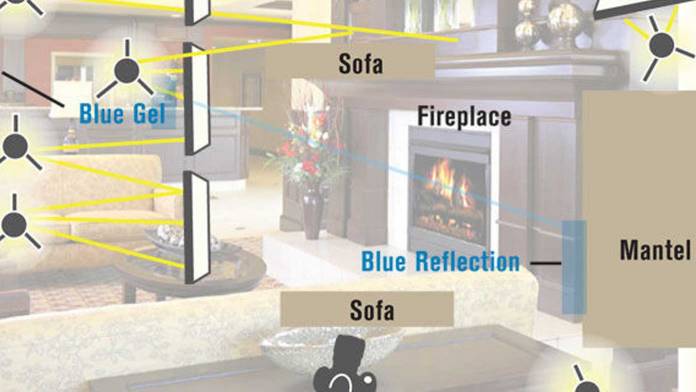 Imagine an assignment that requires you to capture an entire room without panning the camera or taking cutaway shots. Doesn’t sound too difficult until you arrive and discover that the room is too dimly lit for decent video and it’s incredibly large. You can rely on the ambient light and turn up the gain and get marginal results or you can bring in your kit and light it yourself.

The problem with large rooms is they usually require very wide shots and your lights have to cover so much space. This can be one of your most challenging assignments, particularly when your producer or director thinks that the larger the room the easier it is to shoot. This is common scenario so it would be a good idea to gain an understanding of how to approach this wide angle lighting problem.

A wide shot can be in a large hotel lobby or it can be a small kitchen that you might find in an urban walk-up. Either way you are required to produce good results with natural appearing lighting. In many situations, your greatest asset is also your greatest nemesis, because not only do your lights illuminate the area but they often get in the way, and with larger rooms your lights are farther away from the subject. One of the problems with artificial lighting such as florescent lighting or incandescent lamp fixtures in a building, or artificial lighting you create, is the light falloff. The intensity of the light emitted from a fixture attenuates at a very fast rate. That’s why interior lighting designers specify so many lights in their designs and why exterior lighting designers put so many lights in parking lots.

Walk into a well lit office and you will see dozens if not hundreds of smaller fixtures evenly spaced on the ceiling. Drive by a new car lot and you’ll see it teeming with tall, evenly spaced lighting structures.

A properly lit room can be dramatic with nice shadows and sharp specular highlights but is still functional. A high-end restaurant usually has dramatic, contrasty lighting but you can always see well enough to get around. Lighting designers could just mount a few huge lights at each of the four corners of the space and let everyone near the light fixtures painfully endure the intensity of the lights, while the people in the center of the space live in the dark. Designers have discovered through experience that a few high powered lights don’t work well when lighting large spaces. It produces very contrasty lighting.

Very brightly lit areas and too dimly lit areas in the same space can be tolerated by humans due to our ability to see in many lighting situations but it can be exhausting to spend any time in such lighting conditions. Contrasty lighting is uncomfortable, but our eyes are so adapted to seeing in these situations, all we need are sunglasses to reduce the dynamic range. Our camcorders are much less forgiving and can only record very compressed lighting dynamics.

As a videographer you must learn to recognize dynamic lighting situations and adjust your camcorder or alter the camera’s controls to accommodate its limits. One way to avoid contrasty lighting is to select what you choose to record, like not including windows in your shot or avoiding areas that are in direct sunlight and have deep shadows. You can also shoot when the sun has set and the dynamics of the outdoor light and indoor light are more closely matched. Finding the golden hours near sunset can always help you deal with sunlight.

With event videography you can’t always choose when or where to shoot and frequently you must bring in your own lighting, which shouldn’t be too difficult, but there are times when it seems that everything conspires to foul up your day. Wide shots, whether in a large, dimly lit room or a small, high contrast room can be very difficult.

As mentioned earlier, the lighting found in parking lots and large offices have two things in common. They both have lots of evenly spaced smaller fixtures and the lighting is placed so it comes from above and that can be your key to successful video lighting. When you place several smaller lights in a scene you eliminate the effects of rapid light fall-off from one light, and you produce a more natural evenly lit scene, and the way to do that is to use whatever lamps, fixtures and windows that are already present. Whether you use a boom to light from above or use bounce lighting you’re aiming for better distribution of light across the entire space.

Figure A shows a large room in the foreground and a similar room in the background. Both have large windows on the right and absolutely no overhead lighting in the ceiling. The lamps were pretty much useless for adding light, and anything that was not exposed to the window light was too dark. Here the light falloff from the window was pretty intense so the wall on the left with the picture on it was much darker than the back of the red sofa on the right of the set. The ceiling was an obvious feature of the room so that had to show well and the overall ambience was very soft.

The best way to retain the design of this room lighting was to place several small powered lights around the room and several higher-powered lights behind the camera. The key here is to not overpower the existing light but to accommodate it, to respect it’s beauty and accentuate it. You should work with what you have and not over-light the shadows. The smaller lights were mounted on background stands pointed slightly down and evenly placed behind the sofa on the right side wall along the entire length of the room.

On the wall between the built-in cabinet and the painting you can see the effects where the light is brighter just above the sofa. It’s not natural but it looks good and separates the wall from the sofa. Whenever you see a well lit set you can carefully look for hints of how the lighting director lit the room and this is an obvious hint.

If you look into the other room you can see the same effect along that wall, too. As for the larger lights they were simply spread out along the wall behind the camera and pointed facing backwards into the wall where they picked up the nice warmth of the painted walls and reflected it right back into the room. You can see the warm reflection in the corner of the table leg facing the camera while the leg to the right shows a bluish reflection from the window. Once again using these hints can help you figure out how the set was lit. The other room was lit the same way only the lights were placed in the right and left corners of the room. All of these lights were basically fill lights while the main lights were from the windows.

Scrims and Spill Working Together

Figure B shows how lots of smaller lights placed all round the room can create an interesting effect while remaining natural and treating each detail in a unique way. In this room there were only lights from the existing fixtures and they were mounted in the ceiling and provided very little light but they provided nice highlights after the room was ready for shooting. The entire mantel is softly lit.

Placed along the left of the set were several 8-foot by 10-foot scrims hanging from booms with several high powered lights behind them. This provides the overall lighting for the mantel. One of those lights was gelled blue and moved closer to the scrims (about two feet) and created the blue reflections along the right of the mantel while the others were about eight feet from the scrims and created a nice soft wall of light. Since most of the lights were far from the scrims, they spilled over into the room providing the splashes of light seen along the ceiling and a little spill-over seen along the back of the sofa in front of the set. A raw light was placed to the left of the set to provide the highlight on the sofa in the back of the set. One large scrim was placed on the wall to the side of the fireplace to provide the soft reflections on the cabinets at the back of the set. The lighting behind that cabinet is the existing lighting as found in the room. The ceiling lights provide the warm highlights on the back sofa and the mantel.

Most serious video producers have at least one reliable light, and many more have a three-point kit. You might not own all this extra equipment but it’s possible to find these at a lighting equipment rental store and some theater rental houses.

Sidebar: Free Lessons – Lighting Designers’ Work is All Around You

With event videography, it’s important to use as much of the existing lighting as you can and adjust your lighting to match that so as to create natural lighting that best expresses the situation. Usually in high-end spaces the lighting designers have created a beautiful ambience so it’s a good habit to study just how they treat the room lighting and how they light each element within the room. Many times they can become your teacher and you become better educated with each new experience.

Restaurants and fine hotel lobbies are great places to learn about natural lighting so whenever you have the opportunity to study these spaces, by all means do so. Remember though what you see in the real world rarely works out in your camcorder. It’s easy to overpower the existing lighting with your video lights and lose all the beautiful ambience, so always approach your lighting with a “less is more” attitude and you will fare much better, with less frustration.

Whenever you’re watching a film or TV show, pay attention to not only the obvious lighting of each star but also to the ambient lighting because often times this is where the jewels of knowledge are. And look for hints that help you solve the mystery of how those masters light their sets.