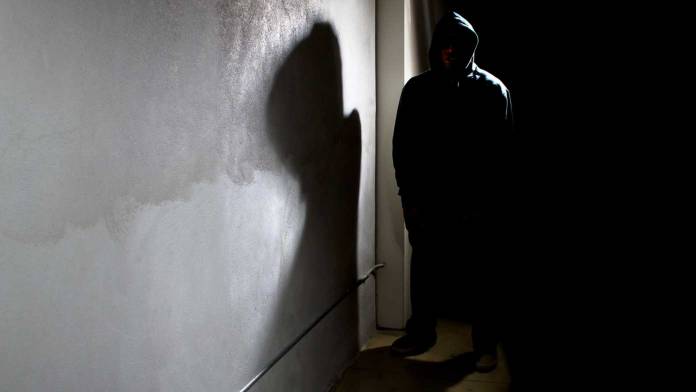 What’s more fun than scaring the heck out of your friends. You know, sneaking up behind them and dangling a squiggly rubber worm on a shoulder or blasting out of a closet just to see them nearly jump out of their shoes. It never gets old does it? Well neither does classic horror film lighting where everything is hidden in deep, ambiguous shadows and what is revealed is projected in hard, contrasty light. This is noir lighting that’s incredibly fun to do and is an effective way to promote a sense of mystery or imminent doom in horror movie effects.

A skilled director or special effects designer can evoke these emotions in the audience with a simple flicker of light or slight movement of a shadow while the audience doesn’t even realize they are under a spell. A subtle blink of red light that vanishes as quickly as it appears mixed with a dash of blue ambient is all the ingredients a director needs to force the audience into a state of tension. Mix in an abrupt splash of harsh light skimming across a face and the audience will release all that tension in a sudden burst of emotions. And it doesn’t always take any specialized lighting equipment or lighting studio. All it takes, with a little practice, is a few well placed lights armed with color gels and an assistant to jiggle things around a bit.

Setting up horror film lighting is fun and easy. You just need to understand light, color and placement of shadows for that spooky effect that garners goose bumps every time. Filmmaking is fun and horror movies are no exception, it’s all about creative expression, letting go and creating the unexpected. The best way to do that is with lighting because unlike walls, furniture and people, production lighting is easily manipulated and doesn’t put up a fuss when you want it to be dramatic. With a little experimenting, you can get lighting to do whatever you want. Unlike acting where there’s a fine line between a great performance and overacting, horror film lighting is always expected to be over-the-top, so let’s get started.

The first thing you need is darkness and the best way to get that is to shoot at night or better yet in a well-lit room, which to your camcorder, can be just about every room in the house. This can work because you turn down the gain on your camcorder to get “darkness” and bring in lights for exact shadows. Yep, day-for-night shooting is an old Hollywood trick. Shoot in broad daylight, turn down the camera and turn up the lights. Hollywood shoots in daylight so that crewmembers can see while they’re working and they don’t have to work at night and earn overtime. The other benefit is the camera works best with the gain turned down and it’s just a lot easier to shoot in daylight. Indoors you are going to need some powerful lights and outdoors you are going to need more powerful lights so it’s probably easier to do day-for-night shooting indoors during the day – and any month when the 13th falls on a Friday!

The lighting needs to be pretty harsh so don’t even think about soft boxes or umbrellas. They create soft, diffused light, which is great for bathing your subject in a flattering even light, which is the last thing you want in horror lighting. You want harsh, almost violent lighting along with dark ambiguous shadows.

Shadows – where the creepies live – and of course the creepies are always painted in a dramatic blue ambient light, and one way to get that blue tint is to white balance your camera to tungsten because that harsh, contrasty light from your cheap halogen shop lights is tungsten which has a warm color temperature. When you white balance the camera to tungsten (also known as indoor) the light from the halogen shop light becomes neutral and the ambient room light becomes blue because the halogen lights have a warmer color temperature than both daylight and ambient room lighting from windows.

We’re talking about making a low budget horror film not a professional lighting design, so the halogen shop lights are perfect for harsh lighting ,and with this technique you get a great color contrast between the two different light sources without the use of gels, which simplifies your production tremendously.

The room light from any window or doorway should be enough for ambient lighting and you have adjusted your camera so that the ambient light is a bit dark, now all you need to do is light your subjects.

You need to place your lights in such a way as to produce shadows where you want them and light your subjects as you want them to appear. Shop lights can cast great shadows but they, too, can blast the whole set with light, so you need to interrupt some of that light so it won’t spill all over the room. You want to control where the light goes and where it doesn’t go. The easiest way to do this is with large “flags” which are placed in front of your lights to create hard-edged shadows.

The cool thing about these flags is that you can move them slowly during a shot which moves the shadows they cast, too. Do this while moving the lights in a different direction and you get some pretty spooky lighting effects, (see Figures A and B.) If you also dim and flicker the lights – things can get pretty creepy. Add some flashing from a still camera’s flash to create lightning in the room, throw in a red gel attached to an LED flashlight, blink your on-camera light and you may even scare yourself into the next century!

So far you have made some nice dramatic color shifts by creatively white balancing your camera to match shop lights while allowing the ambient light to become blue. You have made the light move around with your flags and added a bit of mystery with a gelled flashlight, a still camera flash and an on-camera light. But as with all productions, even low budget horror films, you must consider safety and if you choose to shoot at night, there is the lack of light on set that can pose risks, be it tripping on cords or forgetting equipment in the dark. If you have halogen lights on set, safety is of paramount importance because they get very hot and can easily set fire to just about anything they come in contact with so always use caution!

A good way to make large flags for a cheap production like this is to use panels of cardboard but for safety they must be held several feet from the lights and never above the lights. Another benefit of holding the flags farther from the lights is that this added distance better defines the shadows. If the flags need to be more permanent, look to foam core, sheetrock or even better – sheet metal which can easily be clamped to rolling stands or simply handled by assistants. These materials can be found at most hardware stores. You could also consider using a cuculoris or cookie. There are many ways to get creative with your lighting such as using adjustable spotlights, fresnel lights and even simple snoots or barn doors.

Barn doors are great accessories because they allow you to control the spill of your raw light fixtures. They are mounted to the fixture and consequently right next to the light source so the shadows from them are not very sharp and have soft edges. That’s where the large flags come in. They are really just big barn doors that are held further from the light source. That distance gives the shadow a dramatic, hard edge. It’s really a budget-saving way to get nicely defined shadows just like focusing spots and fresnels except at a fraction of the cost! Walking the flags around moves the shadow which is great for that mysterious effect, and the beauty of learning this technique is you understanding how to place shadows exactly where you want them.

Consider a straightforward interview where you would like to light only part of background and leave other parts in shadow or even project patterns on the background. This is exactly what a cookie does. It interrupts the light in some places and allows the light through in others, thus projecting a pattern of light and shadows. The farther a cookie is from the light the better definition the shadows have. Matthews Studio Equipment makes wooden cookies and companies like Lowel, Smith-Victor and others make a huge assortment of lights and modifiers that will allow you to do just about anything your heart desires.

You should consider the lighting techniques presented here just a primer because with the art of horror filmmaking, anything goes! The great thing about horror lighting is it doesn’t need a great deal of specialized equipment. Anything you build or purchase for your “horror film kit” can nicely fit into your regular kit because special effects in movies often consist of just great lighting and all you are doing is changing the way you use each lighting tool. So… anything you learn on this production can easily be adapted to rest of video production, and that’s great knowledge.

Sidebar: What You DON’T See in the Shadows 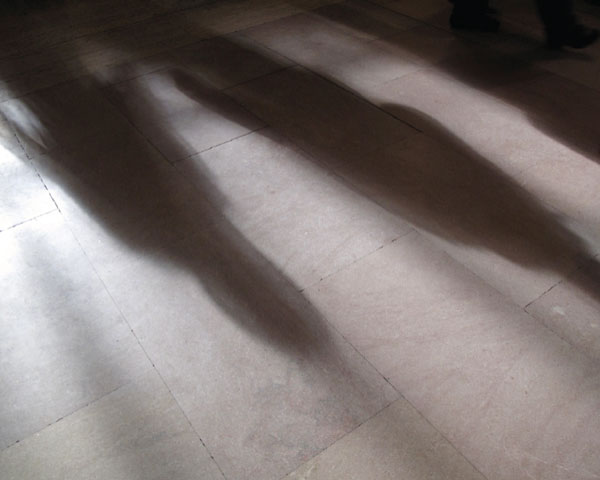 The absence of light magnifies sound, which can indicate creepies from behind the camera. Let’s take the idea of using shadows to tell our story, at some point you will want your audience to feel uneasy, just like a character on screen. By having just a few instances of absolute blackness your audience will have no idea what’s coming next, now this isn’t to say you hold a long black, since that will remind the audience that they’re sitting in a theater or home and watching a production. Instead let the audio take control – when’s the last time you felt cozy in an unfamiliar and dark room with creepy music and a chainsaw start up?

Another trick suitable for the horror genre is only possible due to the limited frame you allow the audience to see. With a spotlight and some well chosen tools or figures you may imply characters in your story with shadow. Like shadow puppetry, what the audience expects, is all that matters, you might use a grasping hand, or an object like a doll, anything that represents terror. These should be easy to distinguish items and their shadow may be all that is required to get an emotional response from your audience, just be sure to follow our advice on how to operate the light causing the shadow and you’ll have a fun and effective way to paint your story in light.