When you view captured images such as photographs or video you are really viewing what the camera saw: light. Just like a camcorder sees light, an artist sees light and interprets it into a painting. Digital imaging software such as RenderMan, which is what Pixar uses to make its films, incorporates lighting tools in image rendering. Lighting is an essential part of expressing an image to the viewer and the effective use of lighting can greatly improve the overall look of an image.

An artist can choose from a variety of looks to create an image. For example, simple flat lighting such as what you would encounter when recording outdoors at twilight just after sunset has a low contrast look where everything is bathed in the same, even light. Wait just a few minutes for the Sun to completely set and you have too little light to record. Move your set under a street lamp and suddenly you have contrasty light that renders the shadows in complete darkness while revealing each and every detail of the highlights. We’ve all done this with similar results; strong light on the subject’s hair with a little dabbles of light on their forehead, nose and chin. Great fun for Halloween but it’s pretty useless for anything else. There is no right or wrong way to light a scene but there are ways to improve your lighting to express your interpretation of any given scene.

It Takes a Little Planning

Rim lighting, one of the most overlooked and least understood lighting techniques is also one of the more difficult techniques to set up, because, in order to be effective the “rim light” itself must overpower all the other lights and it must be placed correctly. The subject must also be brighter than the background. In the night scene described above, the street lamp easily overpowers the night sky and creates a great rim light and if we recorded this scene while the sun was still setting we could have enough details in our subject to render a useful scene but we would be at the mercy of nature because the Sun sets pretty fast and if we have to re-record we’ll probably miss the light.

In the situation above we had plenty of intensity in our rim lighting but little control over placement of the rim light and no control over the fill light provided by the setting Sun, but we achieved dramatic results when the subject clearly stood out from the background and that’s the point of a rim light. This is similar to a hair light in classic portrait lighting which is used to make the subject stand out from the background, but unlike portrait lighting, in which you are lighting the subject with subtle lighting. Rim lighting technique is all about dramatic, powerful lighting designed to evoke emotions. Rim lighting, like portrait lighting, is all about three-point lighting, where you have a key light, fill light and a hair light; except instead of a subtle hair light we increase the power and place it in such way that it creates a brightly lit rim around the subject.

Day or Night It’s Your Choice 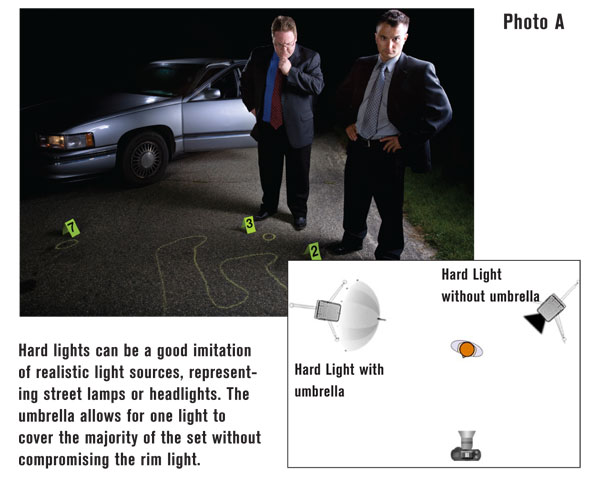 You don’t need a full light truss or extreme studio lighting techniques to utilize good rim light techniques. The classic image of a detective standing in a dark alley, smoking a cigarette while looking disheveled in his fedora, basking in the light of a distant street lamp isn’t the only way to make effective use of rim light. You can also go for a little upbeat lighting such as a musician in his studio. Or how about taking advantage of a beautiful sunrise streaming through the trees. Any one of these styles is easy to create if you understand a few basic concepts and they all have one thing in common: unlike portrait lighting or the street scene discussed at the beginning of this story where the back light is above the set, rim lighting places the light at the same level and slightly behind the subject where it paints a rim around the subject.

This detective scene (photo A) is created without the aid of a fill light but utilizes one large, hard light such as a Tota-light (Lowel Tota Light T1-10 $185) mounted with a silver umbrella. The umbrella gives a nice, specular quality of light while providing enough coverage to light the scene and the profile of the figures, as well as their clothing. It is placed to the side of the subject and moved around until the effect is exactly right. There is a second directional, hard light on the other side of the set which is placed behind and above the subject to light the back of the set and just a bit of their faces as well as their coats. This classic application of noir lighting has been around for decades. The key to this and most rim lighting is using hard, directional lights to create clean, crisp well defined lighting edges. 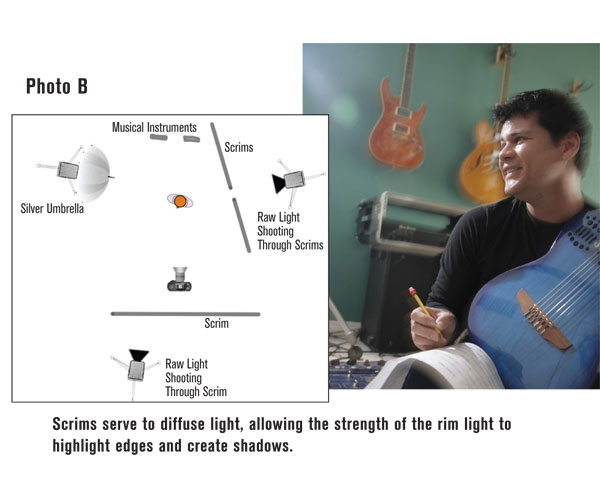 The guitarist (photo B) is lit with a similar technique as the detective photo where once again, a hard, directional light is used for the rim, except that this photo includes a large, soft fill light from behind the camera to reveal his face and details of the rest of the set. The rim is placed about 20 feet away and to the side of the set where it lights his face, his arm, the book and the pencil, providing crisp edge definition. If you try to do this with a soft light such as a large soft box, the light will wrap around the subject and diminish that crisp, rim light effect.

There is a second large light source shooting through several eight-foot scrims lighting the guitars on the wall, the back of his neck and the room. These are placed to the right of the set and provide no lighting to the front of the set. Scrims were used here to soften the light but some of the raw flash “leaks” past to provide some speculars on the amp. This was accomplished by placing the scrims a few feet apart and shooting between them so some of the raw light leaks past them. The fill light for the set was lit with a 10 x 10 foot scrim directly behind the camera providing nice fill for the face and nice smooth reflections for the blue guitar. This fill light is a bit dark but that accentuates the rim lighting and gives some drama to the set. A slight variation of this lighting is used in the orange photo (photo C) where the primary rim light just to the left of the set is the rising sun. An artificial light is placed exactly behind the set giving transparency to the leaves. The fill is provided by a soft box behind the camera and is brought to enough power to reveal proper exposure on the fruit. There is a small mirror, which creates a hard-edged rim light for the “glint” in the water droplets.

Another way to create rim lighting on location is to use an existing window as your rim light and a reflector as your main light. The twist here is the window light is bright enough to allow you to use a reflector to “capture” the window light and bounce it back to your subject for a nice fill light. There’s something romantic about only using a window and reflector but it can take a few tries to perfect. You will need to place your subject next to the window. The farther from the window you bring the subject, the thinner the rim light will be. Then you put a large reflector opposite the window and right next to the subject to create a fill. Don’t be afraid to move the reflectors as close as necessary because the soft window light diffuses quite rapidly and you lose “reflecting power” with a diffused light source.

You might try a more efficient silver or gold reflector. You can rotate the reflector around the front of your subject for more fill or rotate it behind the subject for less fill. You can also add another reflector opposite the window but completely behind the subject to create a smaller rim light on the subject opposite the window. Or try raising that reflector to create a hair light. This will really separate the subject from the background for a very nice lighting effect. Whenever I set up for this kind of lighting I always set up an artificial light with a large soft box or scrim. I do this in advance just in case I can’t get enough “power” from the reflectors for enough fill. That way if things go wrong I can just power up the light and get on with the shoot.

You can easily mix window lighting with your light for more flexibility and even use the color balance difference for additional effects. Try a tungsten light as your fill, opposite of the window fill for a nice warm light. Throw a warming gel on it and have someone gently flutter a flag in front of it for a romantic fireplace effect.

Whether you work with existing window light and bring in your own kit as a supplement, mix and match your lighting with the sun or create dramatic studio lighting techniques from scratch, you can control exactly how to express the lighting you want as long as you follow a few simple steps, plan ahead and allow your own creativity to command the video shoot.

Sidebar: Chaos? Not IF You Are Prepared!

For an interesting night shoot, find a well lit parking lot with plenty of street traffic nearby. Look for an area in the parking lot where the street traffic is frequently turning so that the car headlights are constantly sweeping by the same spot. Set up your talent on that spot and arrange them so the light from the headlights creates a strong rim light. Arrange the talent so that the street lamps in the area become the hair light by placing the subject far enough forward of the light so that it doesn’t hit any part of their face. Then with your on-camera light, such as the Litepanels Micro LED on-camera Light, set up the exposure so the hair light from the street lamps, head lights of the cars and on-camera light are correct. The Lightpanels Micro is dimmable so it should be pretty easy to balance it to the scene. The results of this setup will be a very high-energy scene that lends itself well to interviews involving traffic accidents, crime scenes or other dramatic situations.

If this isn’t chaotic enough for you, how about a little gel action. Have an assistant with a separate light mounted with a red or blue gel create another rim light on the other side of your talent. Have the assistant flash the light on and off for a flashing police lights effect. Learning how to create chaotic lighting situation like this will prepare you for anything that may come along. Just make sure you have permission if you are on private property and be aware of any stray traffic or pedestrians that may wander into your set.