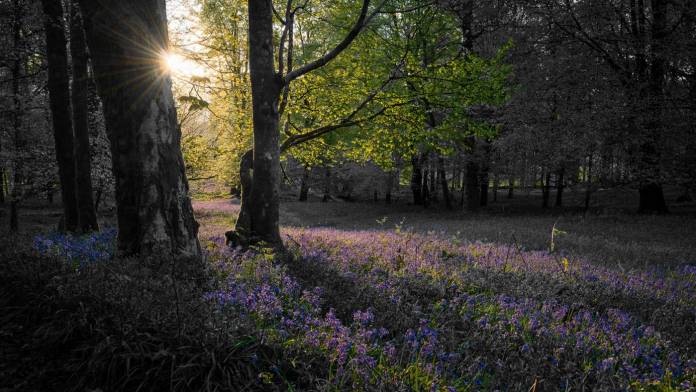 “Videography – the practice or art of recording images with a video camera” (Merriam-Webster Dictionary.)

The word “videography” is derived from the word “photography” which is defined as: the art or process of producing images by the action of radiant energy and especially light on a sensitive surface (as in film or a CCD chip). The two key components for producing images is a sensor which is your camera and radiant energy which, for our purposes, is “light”.

Each of the above definitions include “art” and “images”. These two aspects are not the ingredients of videography, per se, they are your interpretation.

Lighting cinematography is part and parcel of successful videography cinematography is the art of using light and camera angles to tell a story. Let’s look at some movie lighting techniques that can help you get enough camera lighting to really “paint your canvas.”

So when you look at a scene that you want to videotape you must decide exactly how you want to interpret that scene. Do you want to interpret the scene with dramatic artful images or do you just want to document it? What movie lighting techniques will help you realize your goal? Well, if you’re just there to document the scene then read no further because all you need to do is set up the camera and start shooting. But if you want to bring a bit more to the table then you might find the following lighting cinematography pointers useful.

Determine the Level of Camera Lighting to Use 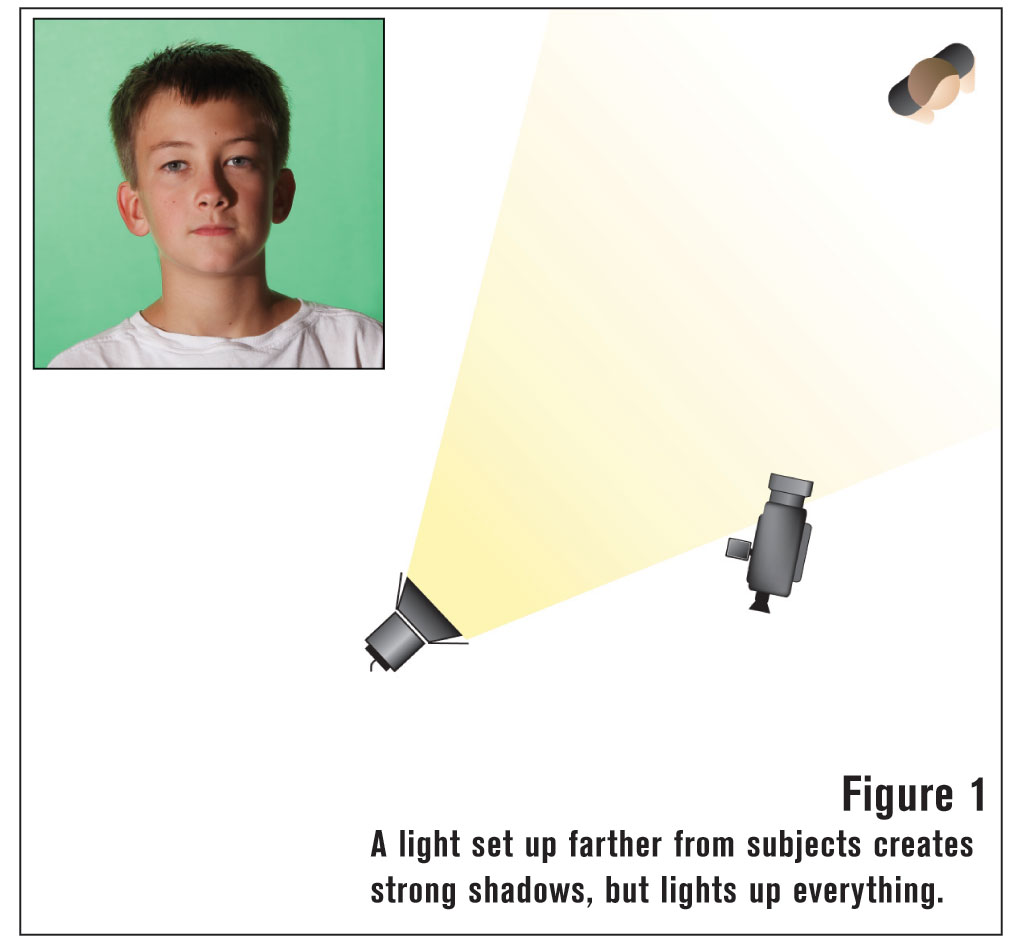 One of the main “ingredients” of videography is “light” which is your paint brush. It’s used to paint dramatic images on your canvas. Your canvas is the scene. In choosing your “brushes” you should consider the effects desired just as a painter chooses a brush based on what he/she is painting.

Imagine creating a scene filled with long, slightly blue shadows punctuated with one streaming shaft of warm light – possibly from the early morning sun – which reveals a mysterious figure standing against the wall. As your subject enters this environment, the figure slowly raises his head and turns. As their eyes connect he asks for a smoke and your subject obliges. As they quietly talk the smoke slowly drifts around them.

There are several ways to interpret this scene on location but if you are restricted to a studio you must create your own camera lighting. In the above scene there are two light sources involved. The direct warm light is obviously from the sun but what is not so obvious is the bluish shadows which might be created by walls and filled with the soft light of the early morning blue sky. 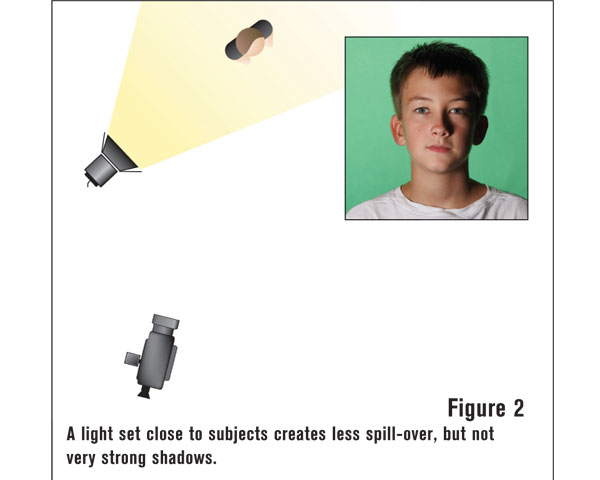 Creating the light that appears to come from the sun is pretty easy in lighting cinematography – just point a hard direct light such as a raw quartz like a 500-watt Tota at your subject. Nice, easy solution but without controlling the camera lighting you end up lighting everything, creating too much spill-over. This light must be set pretty far from the subject to create hard shadows but it lights everything up. (see Figure 1.). Put it too close and it becomes too diffused and doesn’t give you hard edged shadows (see Figure 2.). Here’s a movie lighting technique to use: The scene calls for a hard light source creating a direct shaft of light – your Tota, even with barn-doors – isn’t going to cut it. You need to put the light pretty far away from the subject. Just like the sun is far away from our planet, the farther your light source is from the subject the more direct and less diffused that source is. That’s why your barn-doors will only control spill-over and not create hard edge shadows which you need to create the “wall” in the scene above. The barn-door is too close to the light source. 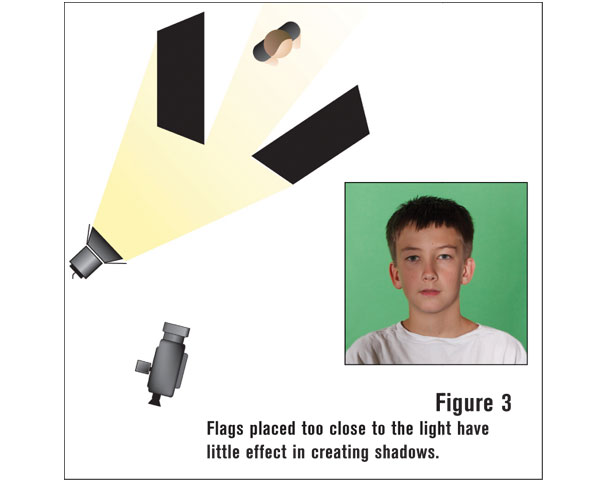 Flags can be used to create hard shadows but if placed too close to the subject they act like barn doors and don’t create shadows (see Figure 3.). But if a flag is put at a greater distance from the light and closer to the subject it creates hard shadows (see Figure 4.). Very cool and very economical, plus you can vary the degree of hardness of the shadow by moving the flag closer or farther from the light source or subject. Flags do require space and your environment may be restricted so you may need to use a modified light.

Spots are great for creating hard direct light and can do so in very tight spaces because they focus the light. Spots also have built in mechanisms that allow you to vary the hardness of the shadows and many have either slots for pre-designed cut-out shapes of metal or movable blades that allow you to create very precise shafts of light. Depending on the power, they can be anywhere from 100 watts and weigh 15 pounds to several thousand watts and weigh in at hundreds of pounds. 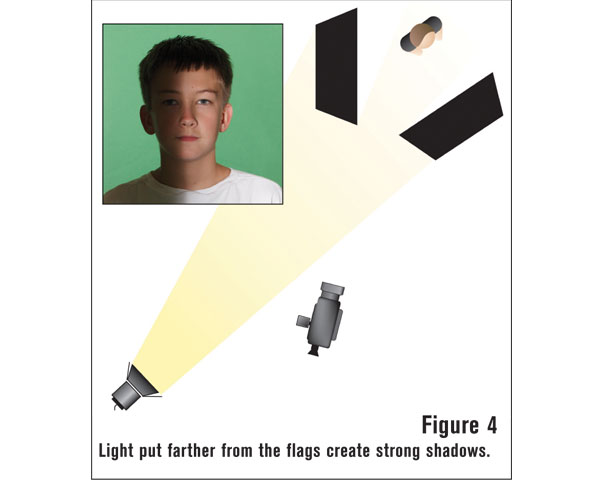 Fresnels are the staple tools of film production companies worldwide. They aren’t inexpensive and many have built in fans because they can become extremely hot, so caution is advised when using them.

Fresnel lights are a nice compromise between raw lights with flags and focusing spots. They can provide very intense hard light while providing adjustments for hardness of shadow edge by means of built-in adjustments, and can be effectively flagged at short distances. The film industry uses these to light entire street scenes. They are available in compact sizes or if you’d like the biggest one on the block Arri offers one at 24″-wide, 134-pounds all while sporting 20,000-watts of output!

Let’s Soften it Up a Bit

Just like achieving a balance of Yin and Yang, understanding hard light is best balanced with an understanding of soft light. The morning scene described earlier would hardly work if the two guys were bathed in the soft, warm morning light of the local park, just like creating a scene for a bride and groom would not work in some dark alley filled with contrasty light and graffiti covered dumpsters.

Soft light is created with large light sources like the blue sky in the scene above. There are literally dozens of ways to create a large, soft light source. Soft lighting is much easier to work with because unlike hard light where the direction of light is just as important as the subject, soft light can come from anywhere. It can come from the blue sky like in our early morning scene referenced earlier, or the surrounding walls of a school room, or maybe from the fluorescents in the ceiling of a large office interior or even a large window in the foyer in a church. Unlike hard light where your subject is harshly lit in direct light (which can be quite unflattering), soft light gently bathes your subject in highly diffused, soft, flattering light which creates a sense of calm. 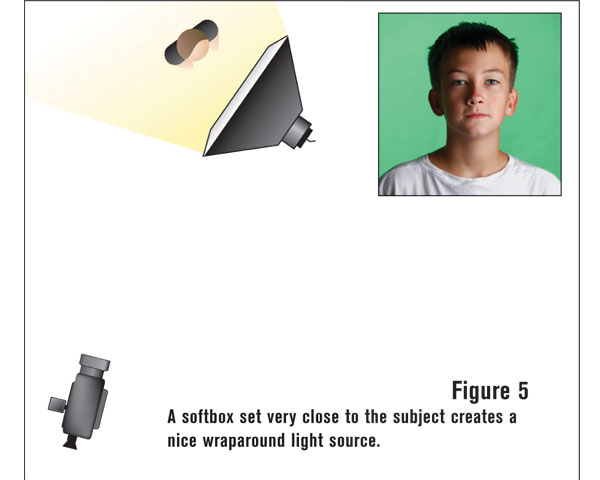 The farther your subject is away from the light the harsher the lighting is. The opposite also is true; the closer the light is the softer it becomes, so when considering any lighting style always consider distance. If you think about it, moving a light away from your subject reduces the apparent size of the light. You can easily create hard light from a soft box by moving so far away from the subject that it becomes a pinpoint light much like a 500-watt Tota . You can also use a 500-watt Tota as a soft light by putting it very close to your subject until, of course it burns everything up! Without going to extremes, a four foot soft box can be a very soft light for a head and shoulders scene because you can put it close enough to just light that scene (see Figure 5.). But move it back just far enough to light a full-length portrait and it gets a lot harsher. Move it even farther away and it becomes a pinpoint light (see Figure 6.). The light hasn’t changed, the distance has and that extra distance makes the light appear smaller. So when considering soft light always remember that soft light is only created by large light sources and one way to make a light source appear larger is to move it closer.

Go Out and Play 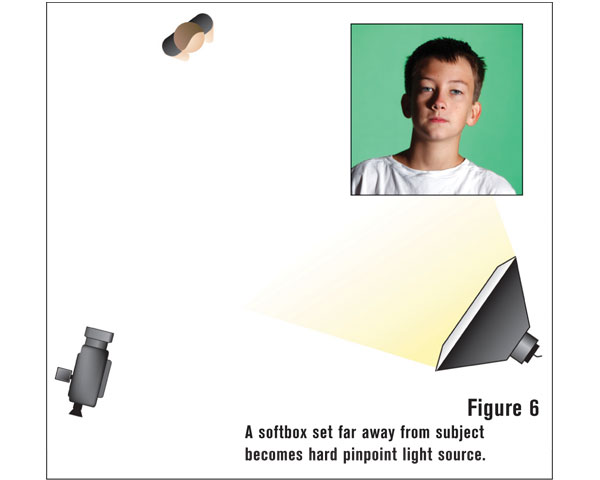 Now that we understand how important the size of our light source is, and how that effects the quality of light produced, and how to change its size by just moving it around, how do we choose a soft light? Umbrellas, soft-boxes, scrims and flat reflectors are just a few modifiers that come to mind for soft light, as well as existing light sources such as light reflected off walls, window lighting and existing lighting from fluorescent fixtures. It doesn’t matter what style of soft light modifier you use because differences are subtle, but what does matter is how you use them. Pull them back for harder light and move them in for softer light and if you have to pull your light back to cover a larger area then you may need to increase the physical size of that light source to achieve the desired result.

Spots and Fresnels, although expensive, are effective at creating hard light at closer distances thereby allowing you much more flexibility in their placement. The choice is yours – soft light for nice flattering effects or hard light for a dramatic look – so don’t be afraid to try your 500-watt light with a flag to make long shadows. Throw in a soft box with a blue gel for a bit of fill for that cool street scene, or move it up a notch and buy some spots or Fresnels and make some really dramatic footage that looks like it was shot in Hollywood.