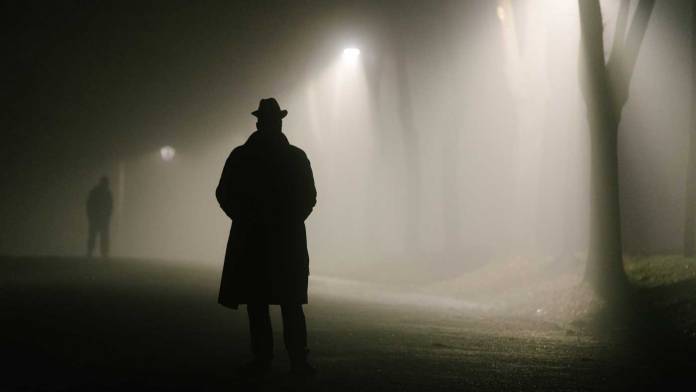 So Youz guys thinks you’re ready for some film noir video? Huh? Well youz ain’t seen nothin’. Them shadows over there? They got nothin’… nothin’, I tell ya! Sure youz put some light over there and youz was careful, real careful… that nothin’ spilled in the wrong place. It’s all ’bout control, you see? Youz gotta control the situation. Sure they asked youz to light the joint up and youz done a real clean job. OK? But youz didn’t see nothin’. Right?

The Golden Age of comic books reached it’s peak in the 1930s and gave birth to many of today’s super heros such as Superman, Batman, and Wonder Woman but more importantly the ’30s ushered in Dick Tracy who was America’s favorite detective. These stories were of intrigue, betrayal and good vs evil and the lines were frequently blurred between the characters. These comic books were illustrated with powerful, graphically depicted scenes shrouded in long shadows, and distant lights. Even though the character’s motives were frequently blurry and unclear the graphic nature of the illustrations were hardly blurred. These illustrations reflected the artist’s intent to convey the hard nature of those times.

The film studios of the ’30s could make movies about super heroes, but these films were hardly believable. However, a film about crime was not only believable but realistic because many of the world’s major cities were engulfed in crime. Filmmaking of the 1930s was still in its infancy and film directors were quite limited by the technologies of the time. Eventually, the art of filmmaking had evolved to reflect what was on the minds of film studio moguls – the dark side of society – and directors, were demanding their photography and lighting effects crews create a style that could evoke the emotions of the time. Thus was born filmmaking in the style of “Film Noir.”

Film Noir is often called a genre, meaning a type of movie style like a western, a romance or a comedy, but it is often argued that you can’t call it a genre because Film Noir video isn’t about the story, it’s about the light – and the dark – within that story. 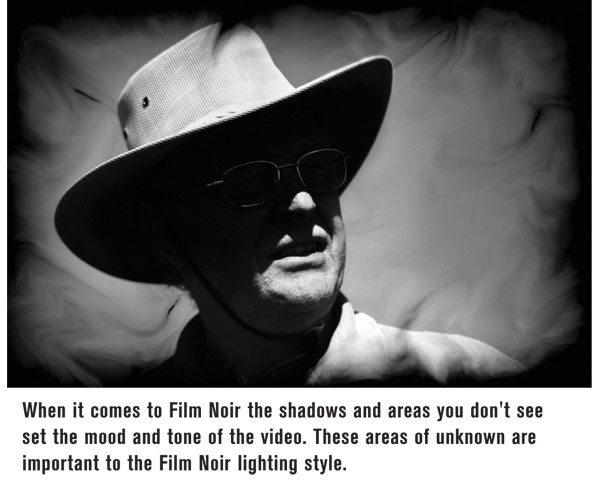 Film Noir is a lighting effects style where the mysterious shadows of a scene – that place of the unknown – might be more intriguing than the subject itself. If you are to create such a dark and powerful scene you must be prepared to use whatever is available to you and to use it with authority.

As an independent video producer it’s best to start this project with a realistic set of goals and with that ever important understanding of one simple concept; “it’s not smart to mess with mother nature”. Unless you have a grip truck full of equipment and a bus load of assistants it’s not wise to try a large scene in broad daylight because the sky (mother nature) will confound you every step of the way. It can be done but if you are just learning film noir video why complicate things? 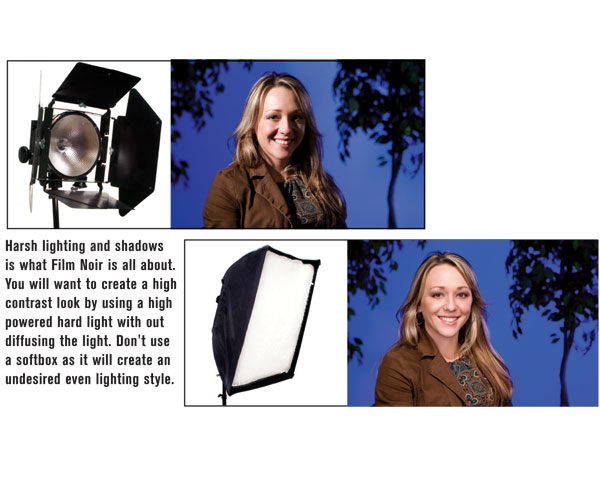 Start off by choosing an environment where you have complete control of the set. Next choose your lights and light modifiers wisely because if you are struggling with a main light that’s too broad like an umbrella or soft box you won’t easily get the results you desire. Basically you want to control your main light so use a hard, directional light such as a fresnel light or ellipsoidal spot or even a 500 watt tungsten which can be controlled with barn doors and flags.

The direction that hard light comes from is critical in producing a believable scene. So if you have a scene where the moon is shinning through a window and your subject is sitting at a table next to it; you don’t want the light coming from the other side of the room you want it to come from the window.

Suppose the room has an open door leading to a brightly-lit hallway where another subject is standing. How do you light this person? Well if there is very little light in the room then you create some silhouette lighting that originates from the hallway behind your subject. Very cool look but what if you want that person to be identified? This is where your creativity comes in. If you create enough light in the room to identify the person at the door but you want the person by the window to be lit only in moon light you might place a lamp directly next to the door, close to your subject and maybe include it in your scene. This is how you set up a film noir scene; you light each element separately and let the viewer know where the light is coming from because the story is all about the mood, or the ambience of the scene. Film Noir light is really very easy if you think of it as one hard, directional light source and very soft fill and light each element separately.

Controlling the Light Controls the Emotion

The beauty of Film Noir is that you don’t need a lot of equipment to pull it off. In fact a good place to start your first project is at night under the existing lights in the parking lot of a shopping mall. The scene is already dark and the lights are hard edged, pin point sources so you’ll probably get some nice results. Here you will learn what to look for in the lighting and you can see the results right away and come away with a good understanding of what looks good. Once you’ve had a little experience with shooting these scenes you’ll want a bit more control with less grainy results which will lead you to those lights mentioned earlier in the article. 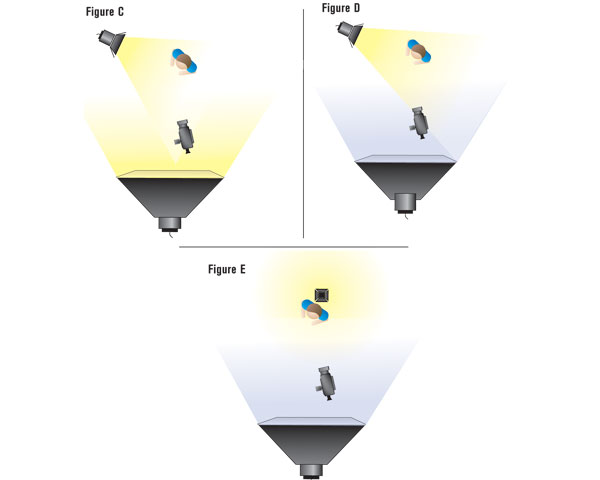 Start off with only one 500-watt tungsten “hard” light and you’re ready for some dramatic results. Put the light behind your subject so that the light creates a bit of a rim around their profile and you have a classic silhouette (Figure A.). With no fill light everything else in the scene is dark. Move the light just slightly in front of the subject to splash some of it on their face and you get perfect “suspect” for that perfect crime (Figure B.). Put a cigarette in his hand, Introduce a second “soft” light from exactly opposite the “hard” light but make sure this soft light only has enough power to reveal minimal detail and you have the lighting for hotel room scene (Figure C.). Put a blue gel on the soft light for a night time effect (Figure D.) and move the hard light directly above your subject (Figure E.), have a hand slowly come from above to snatch the cigarette away and start the interrogation! Two lights, one blue gel and a cigarette; this and your imagination is all you need to evoke a multitude of emotions! Change the cigarette for a cigar and suddenly the “common” criminal becomes a “fat cat” criminal, swap out the cigar for a pipe and he becomes a stately old man who may or may not be guilty! Now put your subject in the same style of lighting, only this time a woman kneeling in the mud changing a flat tire and you get a completely different emotion, one of vulnerability and helplessness.

Film Noir is really fun and easy to work with. That’s why it was so popular in the “B” movies; they could shoot tons of ideas with minimal lighting equipment and very few props. That’s because the viewer was expected to involve their imagination to interpret the scene; they didn’t see everything so directors didn’t have to light everything.