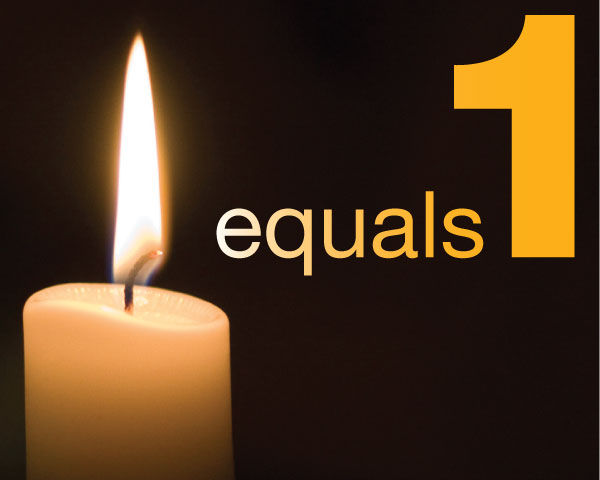 Lux is a pretty cool word; just saying lux sounds expensive. But, unlike diamonds where bigger is better, smaller is better in the world of lux and camcorders. Smaller lux rating = better camcorder. But not so fast; unlike the lux rating assigned to your camcorder, where smaller is better, the lens you mount to it comes from a world where bigger is better, as in “the bigger the glass, the bigger the aperture,” which translates to…you guessed it…a smaller aperture number. That bigger glass with the big aperture and smaller aperture number means larger amounts of light gets in! Confused yet? Well, don’t feel alone, because just a small amount of time spent researching lux will convince you that the people who come up with this stuff are conspiring to confuse us all!

Measuring Lux is a Science

There’s no need to get bogged down with all that science, unless, of course, you just can’t help yourself. For the rest of us, let’s just be satisfied with “lux is the metric measurement of light falling on a subject” and “1 lux is equivalent to one candle of light at one meter” (about three feet, for the metrically challenged among us). The previous sentence states falling on a subject not reflecting from the subject – an important distinction, in that a dark subject will reflect less light than a light subject. Like us, camcorders see reflected light. So, a camcorder’s sensitivity is rated by the light falling on a subject (lux), not the light reflecting back from that subject.

Sometimes values are given in lumens, which measures the light emitting from the light source as measured at varied distances. For example, a standard 100-watt incandescent light bulb will put out about 1500-1700 lumens at three meters. This bulb radiates (approximately) equal amounts of light in all directions; we say approximately, because the mounting fixture gets in the way and blocks some of the light. A standard 60-LED video light using 60 good-quality LEDs has an output of about 850 lumens at one meter. This light is projected at a limited angle of about 45 degrees. Two 28-watt T5 fluorescent light bulbs put out about 5800 lumens at one meter, which would spread to about a 90-degree angle, and a 1500-watt T3 quartz light has about 11,000 lumens at one meter, again approximately in all directions.

As for the lens, well, that’s easy. The bigger the glass, the bigger the aperture, which really means the smaller the aperture number, which lets in more light, which, of course, costs more money. So what does it all mean? Well, I guess the best way to describe it is “the more you spend, the more you get,” and it doesn’t take a rocket scientist to figure that out! 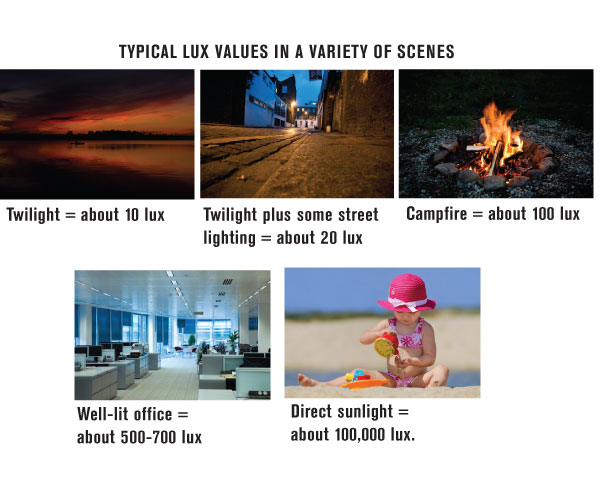 Ok, so now that we’re experts on lux, what can we do with all that knowledge? You can go shop for a video camera, of course. And what’s more fun than shopping with a wallet full of cash and a brain full of powerful information? We are going to make the most of our quest by unleashing our great knowledge carefully.

We want the most value for the money. One way to measure value in camcorders is the way they perform in low-light conditions, whether an evening soccer game or the family singing around the campfire. Camera companies express the low-light performance of their camcorders in terms of lux.

A camera with a 1-lux rating can theoretically produce a usable image with 1 lux of ambient light falling on a subject. The distance of the light source doesn’t matter, because that 1 lux is measured at the subject. But there are so many variables that you really must understand exactly what the conditions were in that theoretical situation. Was the camera lens set at its widest setting where it has the largest aperture? Was the gain on the camera set to maximum where the S/N (signal-to-noise) ratio is highest? Was the shutter speed set lower?

A few years ago, you had to consider these questions and more, because there were many ways to boost the published performance of video cameras, and each manufacturer had its own standards. Fortunately, today most cameras are capable of delivering acceptable results in less-than-perfect conditions, but, if you are truly after exceptional results, then how a camcorder is tested is relevant to how it truly performs.

In the Real Lux World 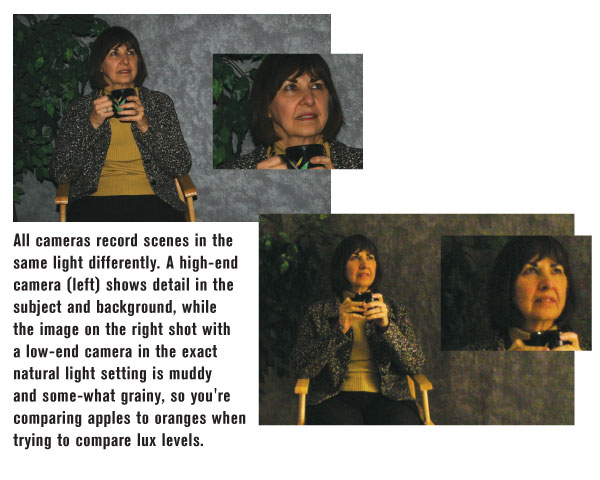 Night time with a crescent moon is about 0.1 lux. Pretty dark. Full moonlight on a clear night ranges from about 0.5 lux to about 1 lux, depending on location. Therefore, if your camcorder is rated at 1 lux, you can tape a scene in moonlight, but it would be pretty grainy. If you’re lucky enough to witness an alien landing at twilight, you’ll find yourself taping at about 10 lux. Add some street lighting, and you’ll get about 10 more lux, for a total of 20 lux. Enough to make a grainy documentary on your sightings! If you’re taping a campfire scene, your subjects will be wrapped in a nice warm light of about 100 lux. The typical incandescent living room is bathed in about 300-400 lux. Perfect for your family and the occasional ghost visit, but not enough for the average camcorder to deliver its best quality. A well-lit office will get you 500-700 lux – closer to enough light, but not optimal. TV studios are lit to about 1000 lux. For a soccer game on a dark stormy day, you’ll get somewhere between 100 lux and 1000 lux. Daylight in shade will provide about 10,000 lux, and direct sunlight will give you about 100,000 lux. Here’s where you’ll find your camcorder performs at its best.

As you can see by these numbers, especially daylight in shade (10,000 lux) to sunlight (100,000 lux), it’s not a linear scale (thanks, Mr./Ms. Physicist!). But once you become familiar with the above examples, it’s quite easy to estimate just how much light is available in each situation.

Do I Need to Know All This?

You may ask, “Why do I care about all these numbers and values? I just want to know how well my camcorder will perform in dark light.” Contrary to what the manufacturers would lead you to believe, it’s not all about the camera! It’s about lighting and making good videos. You can use the above information to estimate how much light you need to shoot nice video. So, if you are expected to make a broadcast-quality video in a typical living room, you can expect to shoot under 300-400 lux, which isn’t enough to make the grade, but is certainly enough for taping family events. But knowing the light in that room is below 300-400 lux tells you what results you can expect if you choose not to use extra lighting. So when you’re looking at the lux rating of your camcorder, remember it’s all about light and your camcorder’s ability to gather light. A super-low lux rating of 1 lux is a great tool for understanding the light-gathering capabilities of a camcorder, but shooting in an environment of 1 lux isn’t practical in the real world.